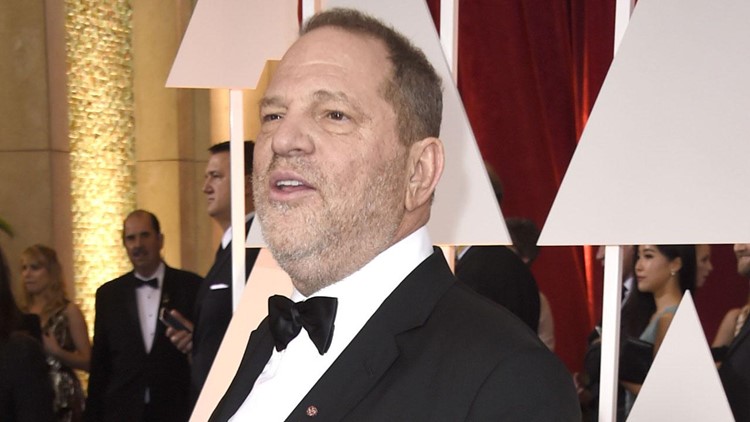 When the winner of the public vote for 2018's ArtPrize is revealed Friday night, will it be the bronze sculpture of a cat who sees himself in a mirror as a lion?

The panoramic portrait made from duct tape of Johnny Carson, Jimmy Kimmel and several other late-night TV hosts?

Or maybe the installation of kitchen pots and pans hanging from red strings that symbolizes peaceful protest in Venezuela?

Outcomes are hard to predict at ArtPrize. The sweeping event that turns much of Grand Rapids into an indoor/outdoor art gallery embraces a wide world of artworks, from the inspiring to the humorous to the provocative.

There are 20 finalists competing for a public vote's grand prize of $200,000, along with four $12,500 prizes for finalists in four separate categories. In addition, juried awards are given in the same five categories for the same dollar amounts.

Harvey Weinstein is about to be pepper sprayed by a ballerina in this large acrylic on canvas painting by Florida artist Kevin Grass. The work demonstates the power of the #MeToo movement. (Photo: Kevin Grass)

But the entry that will be my takeaway from this year didn't make it to the finals.

When I first saw it on display at the Gerald R. Ford Presidential Museum, I wasn't sure if it really was what I thought it was. Neither was the woman who happened to be standing next to me.

Yes, it was him. It's not every day that you encounter a 7-by-14-foot painting of Harvey Weinstein, the film mogul whose name is synonymous with sexual misconduct by powerful men.

Exactly one year has passed since the Oct. 5, 2017, New York Times article that exposed allegations against Weinstein and became a catalyst for the rapid growth of the #metoo movement. The outpouring of disclosures that followed shook the culture and removed Matt Lauer, Charlie Rose, Louis C.K., and many, many more men from positions of influence.

It's a different world now, or is it really? That question reverberates in the Senate's current handling of accusations of sexual assault and harassment made against Supreme Court nominee Brett Kavanaugh. Not enough is being done to look into them or too much, depending on which side of the partisan divide is talking -- and only one side defines respecting the women involved as taking enough time for a thorough investigation.

But back to the Weinstein painting. It shows the notorious movie producer wearing a red shirt that's slightly untucked as he looms over a seated ballerina who's dressed in white and warding him off with upraised arms.

In a tableau echoing classical paintings from centuries ago, Weinstein looks over his shoulder at another female dancer who's standing on one leg in an arabesque pose. She holds a pepper spray canister in her outstretched hand, ready to stop Weinstein from another attack.

"Not #MeToo: No More Casting Couch" is the title.

It's an understatement to say the painting raises a lot of questions. One of them is whose story is this to tell? The #metoo movement is about listening to women's voices, yet the artist here is a man named Kevin Grass, who also teaches art at St. Petersburg College in Florida.

Grass says he was inspired by several things, including discussions with art history students who also were ballet dancers. They shared that the dance community has many of the same issues with harassment as the entertainment industry.

He also was influenced by French impressionist Edgar Degas and "how he would, in some of his paintings and drawings of the ballerinas, have these middle-aged men in there" who were sort of Weinsteins of their day — or, as Smithsonian magazine describes it, "wealthy male subscription holders, called abonnés, who often lurked in the foyers, flirted with the dancers in the wings and laid siege to their dressing rooms."

Grass says he felt OK about tackling the #metoo movement because "you heard Oprah and some other people in Hollywood talking about how it's not just women that need to speak up, but men too." He adds that the reaction from ArtPrize visitors has been "probably 95 percent positive" — both women and men.

The Weinstein painting is one of several entries that address the #metoo movement, which isn't surprising. Art with political and social messages has been part of ArtPrize since its 2009 inception, according to ArtPrize artistic director Kevin Buist.

"Whatever people are concerned with, artists are concerned with, because artists are people," says Buist. "The stuff that they're making is going to reflect those conversations and challenges and hopes and anxieties. Art is a way to approach these subjects that sometimes can be hard to consider or talk about in certain contexts. Art is a great way to drive conversations forward."

Florida artist Kevin Grass next to his painting "Not #MeToo: No More Casting Couches" featuring an image of Harvey Weinstein. (Photo: Kevin Grass)

The Weinstein painting was selected by the Gerald Ford museum's ArtPrize committee, which carefully scrutinizes the works it will house inside its walls or on its grounds. The museum is a must-see stop on any ArtPrize tour. Since the competition began in 2009, it's been home for two grand-prize winners.

"We liked the painting. We thought it had a good message," says Gerald Ford Museum deputy director Joel Westphal, noting that the facility has enough physical space for larger pieces like the Weinstein painting.

There's no connection between "In Step With Betty Ford," the centennial exhibition of the late First Lady's birth that runs through Jan. 6, and the choice of a #metoo-themed painting. In fact, according to Westphal, the museum had chosen another piece involving a "dancing" fabric as an ArtPrize connection to Betty Ford's early dancing career, but it was withdrawn at the last minute.

Still, there's serendipity to the Weinstein painting rubbing shoulders with the Betty Ford exhibition, given her outspoken support for the women's movement and an Equal Rights Amendment. I think she would have been quite comfortable with having it a short walk from her celebration. I bet she would have volunteered to hold the mace.

As I've tried to pinpoint what struck me most about Weinstein's presence at ArtPrize, I think it was seeing him look like a figure from a Renaissance painting, captured for all history in the midst of his villainy.

Yes, that's him. And it's been one him after another for hundreds of years now. Whenever I see Weinstein's face in the future, perhaps during coverage of his upcoming trial, I'll remember that man captured on the canvas, facing a woman who's ready to stop him before he hurts another woman again.

Centered in downtown Grand Rapids, with some other locations throughout city