Out of respect for local tribe, city will remove window that depicts battle at Battle Creek

The seal, created when the city was incorporated in 1859, is meant to represent the "battle" that gave Battle Creek its name.

That question arose after a regional director of the Michigan Civil Rights Commission back then called the seal "racist and violent."

The seal, created when the city was incorporated in 1859, is meant to represent the "battle" that gave Battle Creek its name, though there are open questions about when that battle may have taken place, how serious a battle it was and whether it even happened.

Historian Ross H. Coller wrote in a centennial document that, in the mid-1820s, local Native Americans met with a surveying party led by Col. John H. Mullett, a U.S. deputy surveyor sent to establish the county, township and section lines.

"The surveyors suffered depredations at their camp which included the disappearance of food," Coller wrote, and were one day surprised at their camp by Native Americans.

"There have been many thrilling stories written concerning this incident, including drawn knives and the brandishing of tomahawks, but Col. Mullett said the Indians were merely ejected and advised not to come back," Coller wrote.

Back in 1967, to totally eliminate the city seal would have meant printing new city stationary and painting over decals on city vehicles.

It also would have meant replacing a stained glass window above the landing of the third-floor staircase at City Hall, which depicts a version of the seal in which the Native American is standing.

The seal has been mostly replaced by what's considered the city logo, which was adopted in 1981. The logo shows the faces of a white surveyor and a Native American with the city skyline.

While the city seal remains a part of the city charter, the only place where it is on display is that stained glass window.

But the plan now is to take it out. 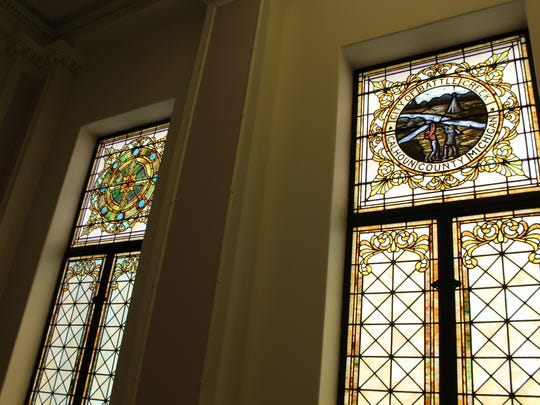 'Not an accurate depiction'

In March, the Nottawaseppi Huron Band of the Potawatomi sent a letter to the city about the city seal.

"While these discussions have been happening for quite some time, the tribe officially reached out in March 2018, basically just to provide our comments and our recommendations regarding the appropriateness of the seal and how it is currently housed in City Hall," Tribal Chairman Jamie Stuck said. "We commented on how the relationship between the city and the tribe not only now but in the past has been peaceful and cooperative. That seal is an inaccurate portrayal of the relationship that our people had with the city and we expressed that."

The city decided to remove the medallion in the stained glass window as a sign of respect.

"It’s to be respectful in two manners," City Manager Rebecca Fleury said. "One is to be respectful that it has been shared with us, that it is concerning to the tribe, that it is not an accurate depiction of history. And also we know it needs to be preserved as part of Battle Creek’s history, so by removing just that medallion and placing it with the historical center or the historical society, we are hoping we are doing what we can to address both."

Stuck said the plan "speaks volumes on their intent as far as wanting to make this right with the tribe."

The stained glass window is more than 100 years old. There are not very many companies that can work with a window of that age and that type of stained glass, Fleury sai.

The city received a quote of $6,755 from Full Spectrum Stained Glass Inc. from Colon to remove the medallion in the center of the window and replace it with a mosaic medallion that is the same as other stained glass windows at City Hall, but the company cannot work on the window until 2019.

An amendment made in 2016 to the Tribal-State Gaming Compact between the Nottawaseppi Huron Band of the Potawatomi and the State of Michigan allowed for a portion of the tribe's annual state revenue sharing payment to be deposited into the Native American Heritage Fund.

Michigan's K-12 schools, colleges, universities and local units of government are eligible to receive funding for the projects that "promote positive relationships and accurate information about the history and role of Michigan's Indian tribes and Native Americans in the state."

This year is the first time the Native American Heritage Fund board reviewed applications and gave awards from the fund, which had accumulated just under $500,000.

Besides Battle Creek's window, the fund board also agreed to pay half the cost of the city of Kalamazoo's project to remove the Fountain of the Pioneers in Bronson Park, just shy of $77,000, and for all of Belding Area Schools' transition to Black Knights as the new mascot, which will cost $334,690.60.

What to do with the window

The Regional History Museum Battle Creek has expressed interest in taking on the stained glass window after it has been removed.

"I'm not exactly sure how we would present this, but before we do present it, we would get Native American input on how best to present it to tell this story," said Doug Sturdivant, the museum's board president.

"Being African American, I can understand the thought process the Native Americans might have regarding this," Sturdivant added. "And, being a public place, I can see why maybe they would want it removed, but it is history and we love preserving history."

The museum has a similar preservation project it took on with "Battle Creek History," a mural previously displayed in Fort Custer Industrial Park. The museum is having additions made to the mural by Anishinaabe artist Alan Compo so that it will show a history of Battle Creek that includes the native population.

The city logo can be found throughout the city. At City Hall, it welcomes guests when they walk in and see the carpet. (Photo: Kalea Hall/The Enquirer)

As far as the fate of the city seal, it will remain unless the city's charter is amended by the commission.

There's been discussion of replacing the city seal with the city logo, which is used on the city's vehicles, business cards, stationary and social media profiles.

Stuck said the tribe has not taken an official stance on the logo.

Fleury said the entire community will have to be engaged on the broader discussion of Battle Creek's identity.

"The window will come out, and we will preserve it for history, but there are broader conversations about what do we do with the logo," Fleury said. "I think that is going to have a community discussion and the commission’s decision as far as what the brand of the city is. Does it remain with the logo?"