That statue shows Union and Confederate soldiers standing back-to-back with a child slave at their feet. 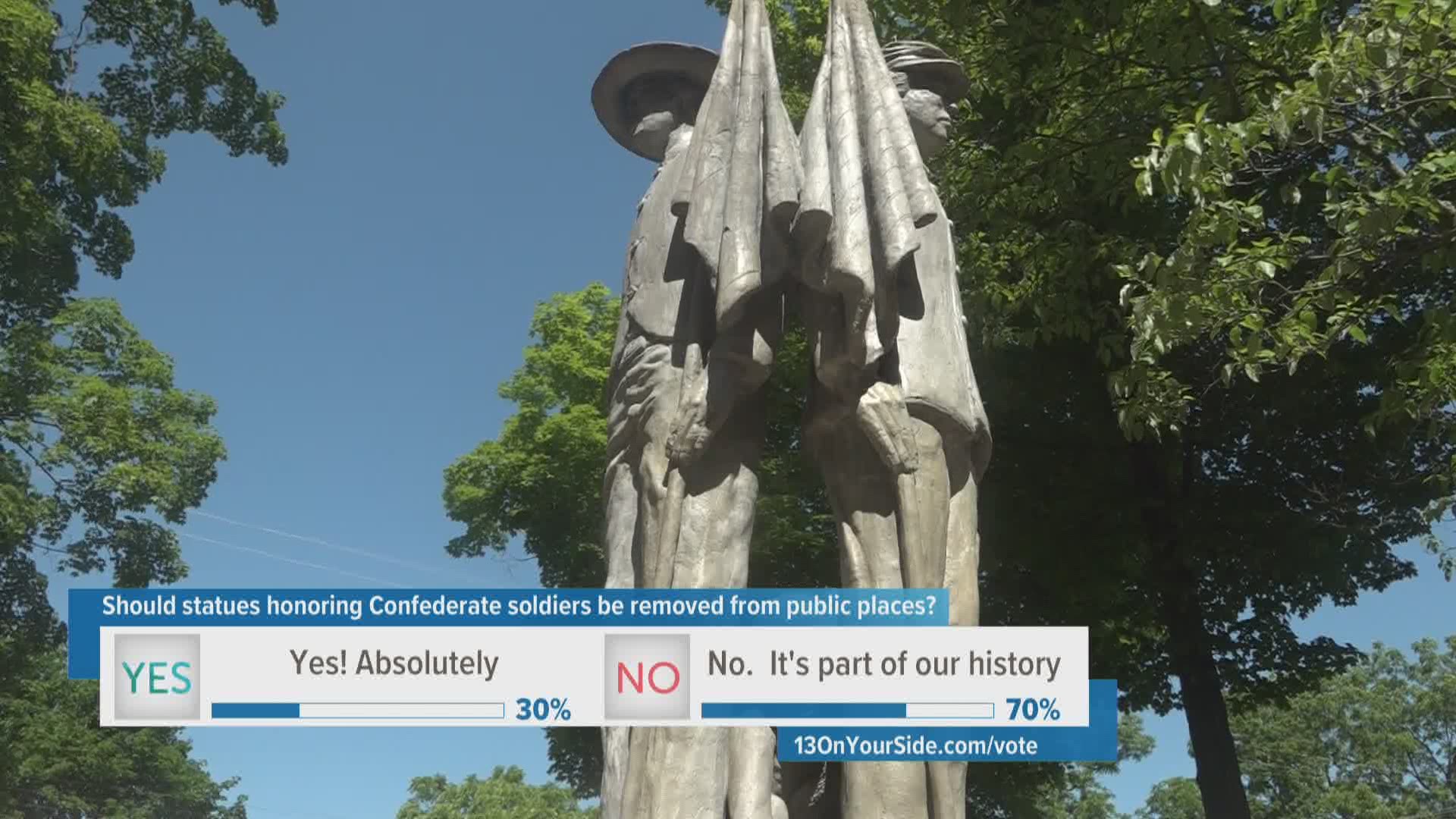 ALLENDALE, Mich. — The Civil War statue in Allendale Community Park has sparked concern from the Michigan Association of Civil Rights Activists (MACRA), and the group is asking the Allendale Township Board to remove parts of it.

The statue, which sits in the park's Veterans Garden of Honor memorial, depicts Union and Confederate soldiers standing back-to-back and a child slave beneath them reaching for a plaque that reads "Freedom To Slaves," referencing the Emancipation Proclamation. MACRA would like to see the child and confederate soldier removed from the memorial.

The statue has been present in the park for more than two decades, but Mitch Kahl, a spokesperson for MACRA, said the recent death of Black Americans such as George Floyd and the growing Black Lives Matter movement has urged more action to be taken against offensive images in public places.

"We don’t see a small Jewish child at the feet of a Nazi soldier over at the WWII display. That would be the equivalent... We don’t want to see small boys carrying cotton picking satchels, kneeling at the boots of soldiers," he explained.

Kahl called the depiction of the child degrading, and questioned why a Confederate soldier was being honored in an American memorial.

"This is not a hero, this is an enemy, a traitorous enemy... There’s no way that they should ever be honored, shoulder to shoulder in equal stature to a true American veteran," he said, adding that no other statues depicting U.S. conflicts in the memorial featured rivals.

Adam Elenbaas, Allendale Township Supervisor, wasn't in office when the statue was introduced. After speaking with community members who watched its rise, he told 13 ON YOUR SIDE its intent to show the Civil War's history.

"The Civil War by definition includes two sides fighting from the same country, and that’s why there’s two statues there...The intent was just to recognize the Civil War, not to celebrate the Confederacy in any way," Elenbaas said, noting he understands some residents are concerned about the depiction.

Elenbaas said the conversation has caused a divide in the community and that he and the township board will be taking all opinions into consideration their public meeting June 22. Community members are welcome to join the in-person discussion, and Elenbaas said many have already emailed him in preparation.

"As a representative and an elected official, my job right now is in listening to all the different viewpoints that are brought to me, so that we can start to take those next steps," he explained.

The conversation surrounding the statue has picked up on social media, with hundreds commenting and sharing MACRA's post last week, introducing plans to take the statue down.

The response has been mixed with some arguing that the statue should stay up, as it is a reminder of history.

Angel Montes and his son are Allendale community members, with his five children attending the area's schools. Montes told 13 ON YOUR SIDE he didn't find the statue offensive but rather a portrayal of the Civil War and what was fought for.

"We’re in America. These people created America. There's history and yeah there’s controversy," he said, "...I do have five more kids, African American kids that I adopted, so just trying to teach them that there’s no negativity about this. I mean it’s only a statue, there’s no racism here in Allendale, at least I don’t think so."

Throughout the opposition, MACRA has maintained their stance on the statue, saying it's a depiction of systemic racism. Kahl noted that the child slave is the only person of color depicted in the memorial, which shows male and female soldiers from major U.S. conflicts.

However, Elenbaas refuted all of the soldiers being Caucasian, saying the statues are all one color.

Kahl said he hopes the Union soldier will remain inside the memorial but wants the Confederate soldier and child slave to go into a Jim Crow museum.

"True history belongs in museums...that's where something that this belongs," he said. 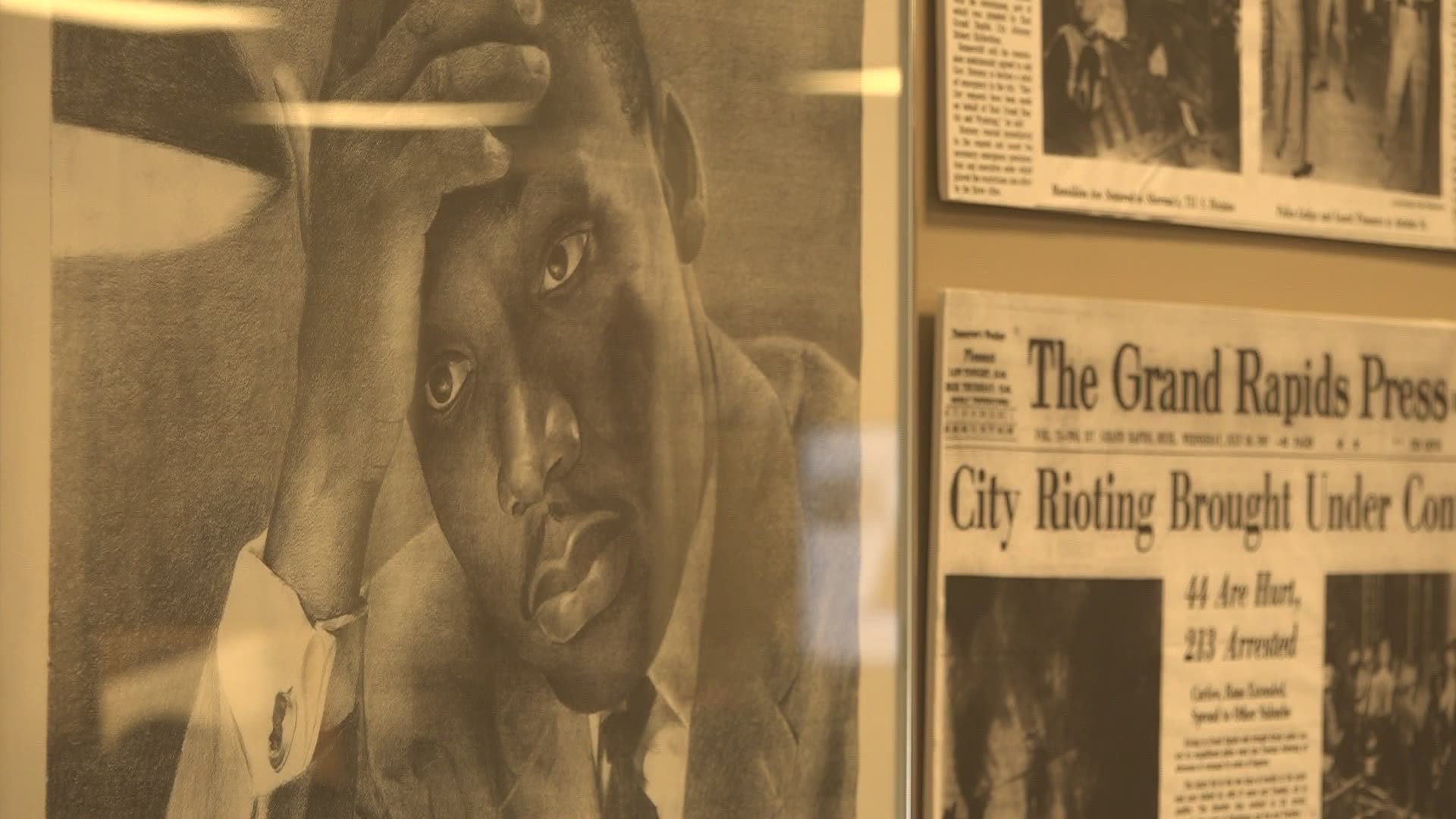