A good Samaritan reported the dog outside a Muskegon home. Now, Pound Buddies rescue shelter is working to give her a second chance at life. 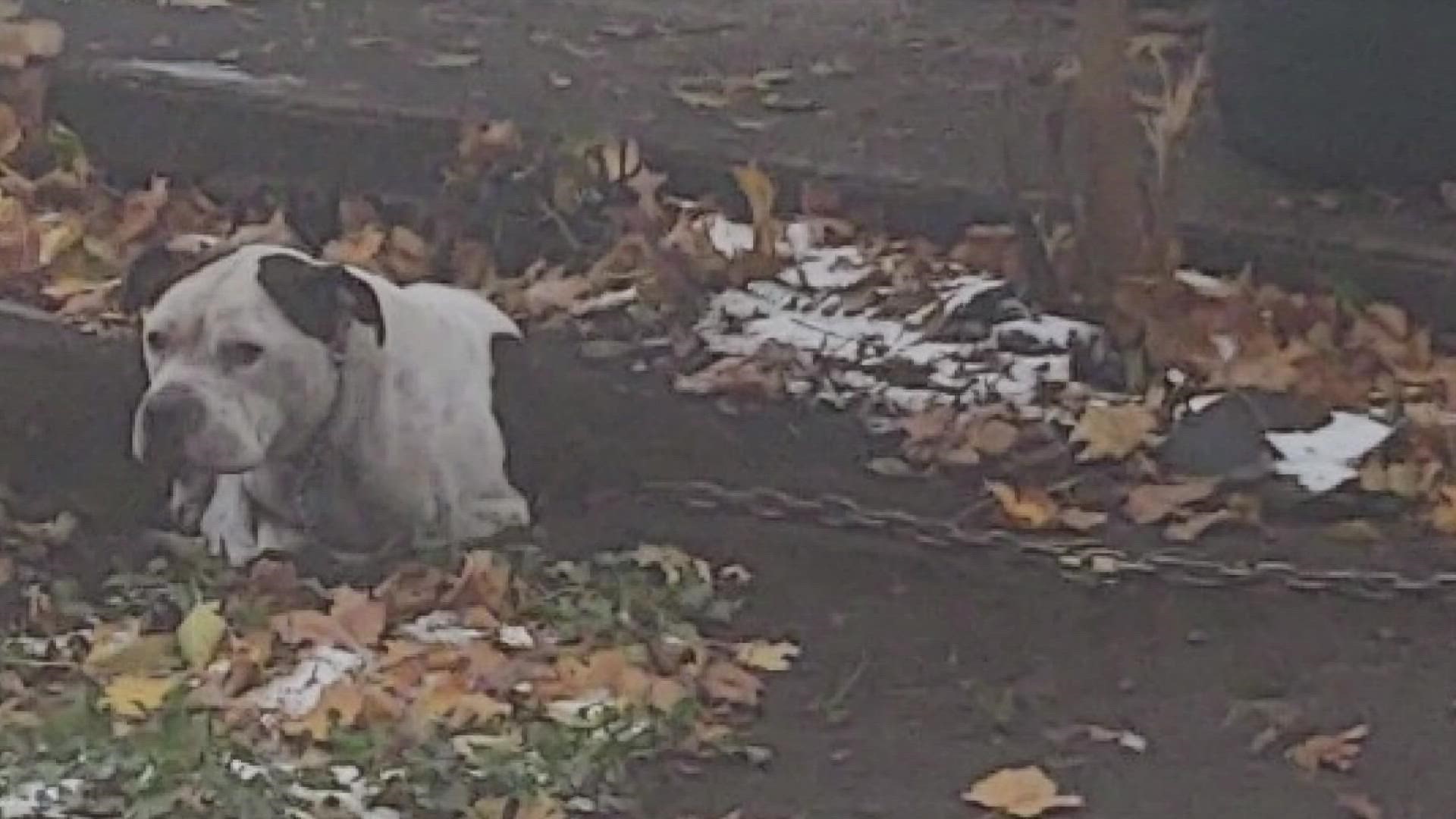 MUSKEGON, Mich. — As temperatures continue to feel more like winter, a Muskegon shelter is reminding the public about the dangers for animals. The plea comes after they rescued a dog over the weekend that was left chained outside, shivering and starving.

It's a story that could have had a much different ending, but a good Samaritan helped turn it all around.

"I don't know how somebody can literally look out the window and see an animal chained up in the freezing cold," said Lana Carson, Executive Director of Pound Buddies, "knowing it was raining and that there was no food or water."

But that was the case for a dog found chained outside a house in the City of Muskegon.

"In this situation, there were no provisions," said Carson. "There was no food, no water, no insulant and it was just blatant neglect."

A good Samaritan reported his concerns about the 1-year-old Bulldog mix being left outside for months.

Pound Buddies then responded to the home for a wellness check.

"There was definitely something to be concerned about," Carson said, "because we did confirm that there was no food, no water and both of the bowls that had been left out were only filled with dirt and leaves."

Pound Buddies, a rescue shelter and adoption agency based in Muskegon, gave the homeowners 24 hours to respond to their reports. It wasn't until the next day, and police were to be called, that they relinquished the dog to shelter officials.

"The dog had again spent the night outside, and it was freezing," said Carson. "She dug a hole in the wet dirt and mud and was just curled up in a ball just shaking and freezing."

Carson said the homeowners didn't even seem to care about the dog's condition.

"The neglect was not going to change," she said, "they wanted nothing to do with that dog."

Pound Buddies brought the dog in that day, and named her Ladybug.

"Ladybug is one of those symbols for good luck," explained Carson, "and I think she was fortunate that she had a little angel looking out for her."

And although Ladybug is now safe and warm, she does have a road of recovery ahead of her.

"Her skin is in very poor condition because she was a choke chain was wrapped tightly around her neck," said Carson, "so it could have been a far worse situation down the road if nothing would have changed."

Carson reminded people that if they are going to put their dog outside, to make sure their shelter is insulated with straw and not hay.

She also said to never use clothes, blankets or towels for warmth because they get wet and freeze, which is what happened with Ladybug.

"Thank goodness for that good Samaritan who was concerned about the welfare of this dog," Carson said, "and we're just glad that he reported it before Ladybug got to any more of a deteriorated state."

Ladybug will now undergo a vet exam and treatment, and Carson said she will hopefully be available for adoption by next week.

Carson said Ladybug is very family friendly because she's good with kids, other dogs and cats.

"Whoever adopts her is going to get an amazing dog," said Carson, "but it is also one of those things where they will literally save a life, because they are rescuing an animal who definitely needed a second chance."

You can keep an eye on Ladybug's adoption status starting next week by going to the Pound Buddies website or Facebook page.