An estimated one in five Michigan drivers are uninsured, according to the Michigan Association of Insurance Agents. 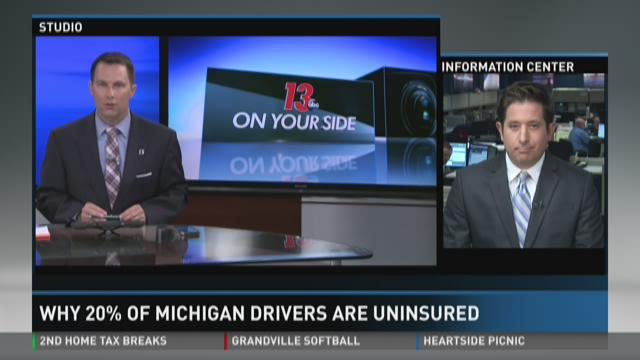 Our 13 On Your Side report about the rising cost of driving became one of our most popular stories online.

Hundreds of people commented on the WZZM 13 Facebook page, about the rising insurance premiums and registration fees.

Now, we're learning that an estimated one in five Michigan drivers are uninsured, according to the Michigan Association of Insurance Agents.

In Michigan, it's a misdemeanor to drive without insurance. On Thursday, we went to the Ottawa County courts, where they are busy dealing with those kind of cases.

We got reaction from Chief Judge Bradley Knoll about 20 percent of Michigan drivers committing a crime.

"It is alarming," says Chief Judge Knoll, who oversees 58th District Court in Ottawa County. "It rates up there as one of the most typical traffic cases that come through our court."

Judge Knoll says like drunk driving, being uninsured is a misdemeanor.

"(It) carries up to a maximum penalty of one year in jail, there's a minimum fine associated with it of $200 with a maximum fine of $500," says Judge Knoll.

"They say what we already know, automobile insurance is expensive in Michigan," says Judge Knoll.

In fact, experts say because of no-fault insurance, Michigan has one of the highest insurance premiums in the country.

Rates are expected to jump again an average of $40 per year for an estimated two million drivers starting in October.

Judge Knoll says district court does not get many no-fault cases, which was the original goal of no-fault insurance.

"To eliminate all of these automobile negligence cases that were clogging up the courts," says Judge Knoll.

However there are also unintended consequences, such as the high cost. Knoll says most first time offenders don't get jail time.

"If you've got a single mom or somebody who's struggling in that sort of area, it's not something I would see as meriting jail time, but I really can't get around the substantial financial penalties," says Judge Knoll.

That can put an uninsured driver even deeper in the financial hole. However, Judge Knoll says not having insurance is even more financially risky.

Chief Judge Knoll suspects that Ottawa County has fewer uninsured drivers than the state average, but still a significant number.

In Wayne County, half of the drivers are uninsured, according to the Michigan Association of Insurance Agents.