Fortnite Parenting: How to manage gaming

The game is taking over households across the world. How much is too much? 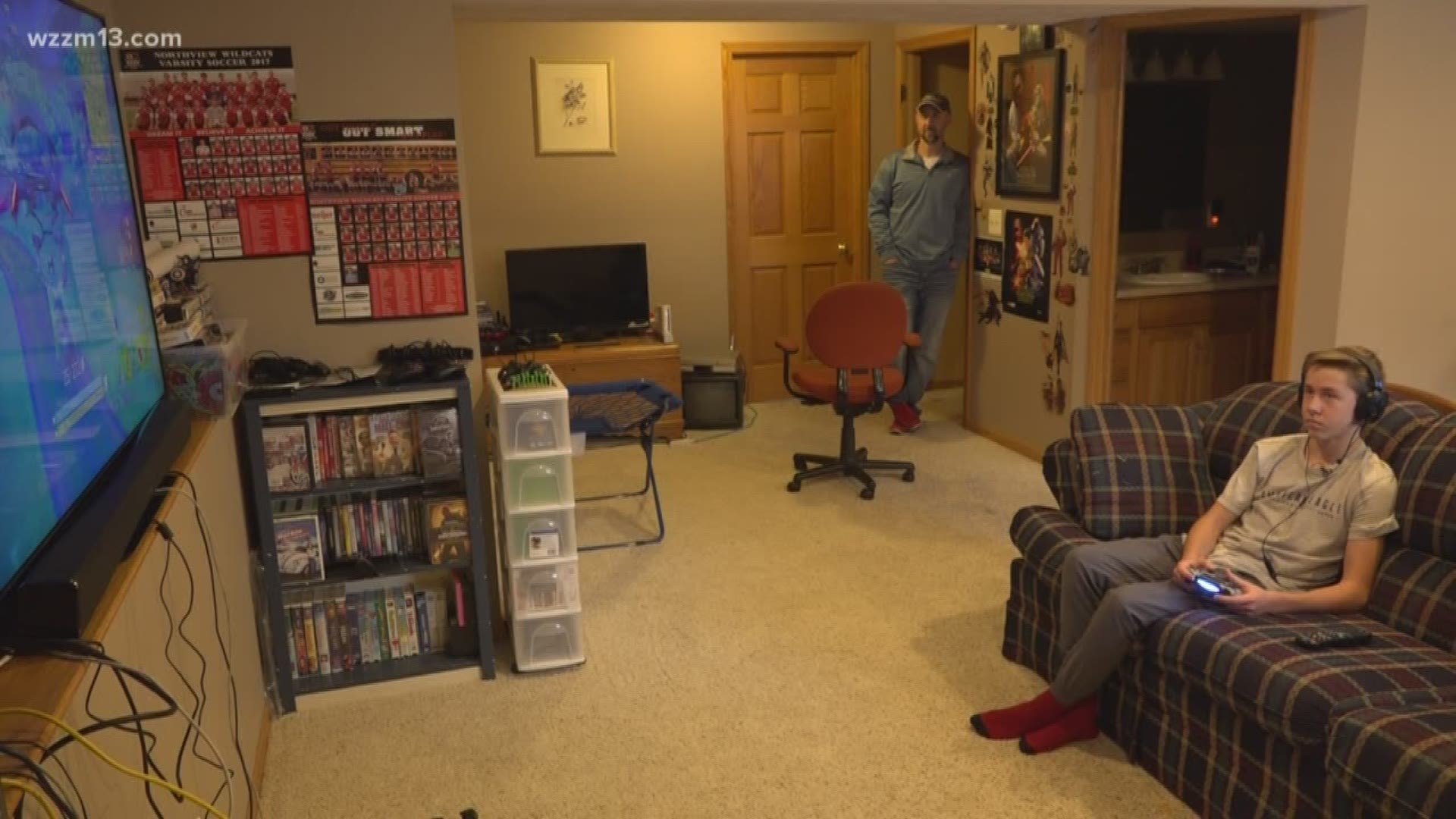 PLAINFIELD TOWNSHIP, Mich. – Countless video games are released on different platforms each year, but few take the industry by storm. Fortnite, a free online game in which players avoid an actual storm while fighting each other in a battle royale, has dominated video gaming for more than a year.

In June, Fortnite’s creator Epic Games reported that 125 million people play the game, which is often described as a cross between the Hunger Games and Minecraft.

A typical game can range from 30 seconds to around 30 minutes. One hundred people drop onto an island plagued by a storm that converges over time, collecting guns and resources. Players build forts strategically and position themselves to eliminate others.

The last player, or group, alive earns a “victory royale."

Every game can be played differently based on where you land and how you approach it, said Matt Toole, a 13-year-old from Plainfield who plays a few hours a day.

The game is massively popular, reaching the professional sports clubhouses and the screens of celebrity musicians. Its dances have even made appearances in athlete celebrations during competition.

Fortnite is available on most consoles, mobile and PC. Children swept up in the fervor are causing problems for parents and teachers.

“When it first started, it was slow,” Matt’s mother Darcy Toole said. “Now, it’s turned into...‘we have to play this game and we need to play It now.’”

Fortnite pegged the “sweet spot” of gaming that caters to many different users, said Dr. Robby Ratan, an associate professor and AT&T Scholar at Michigan State University’s Department of Media and Information.

“Some people play for social reasons, some people play to explore worlds [or] compete,” Ratan said. “Fortnite is a very large world. It’s highly social, you can play with your friends. You’re competing [and] building structures.”

Fortnite taps a younger audience that not all shooting games reach. But the fantastical graphics and lack of blood produce a less violent picture.

That theory is not supported by research, said Dr. Whitney DeCamp, a professor of sociology at Western Michigan University.

“There is a slight correlation between playing violent video games and engaging in violent behavior, but causation and correlation are different things,” DeCamp said.

Other factors, primarily those related to parenting and exposure to violence at home, more strongly contribute to violent behavior, he said.

“After you control for [those other factors,] the effect from playing violent video games seems to disappear,” DeCamp said.

Taking a national stance on the issue, the U.S. Supreme Court ruled against California blocking the sale of violent video games to minors in 2011.

“I’d play it any chance I could, pretty much, when I got it,” Matt Toole said. He and his family gave different responses when asked the most hours he’s played in one sitting – somewhere between four and six.

For whatever reason their children play, parents are concerned about “addiction” to Fortnite. While there are problematic cases of overuse, the video game field is not comfortable treating it as a disease, Ratan said.

“When people stop playing video games, you don’t go through withdrawal symptoms as you would with a drug that you stop using to which you are addicted,” he said. “We definitely do want to encourage moderation in use of video games.”

Moderation is the name of the game for the Toole family. Darcy set a two-hour limit on use of the PlayStation 4, which she’s sure the kids can circumvent. She uses extra time as a reward for good behavior.

“It’s also taken away from them,” Darcy Toole said. “[Matt] wasn’t behaving quite well [recently], so he got removed from his gaming system.”

Fortnite can be played solo, but many battle with partners in duo and squad play. The social element is largely why the Toole’s view the game in a positive way.

“They all play together online,” said their father Greg Toole. “It’s not just a video game. They’re talking and communicating. [It’s] more fun than if they’re just sitting there playing a video game all by themselves.”

The game’s other elements – the combination of building, navigating and aiming – are beneficial for children’s brains, Ratan said.

“They’re playing a game that really allows them to develop cognitive skills that will be useful for their future careers, specifically if they want to go into technical fields.”

How parents manage video game use is key to how they will affect children, both Ratan and DeCamp agreed.

“Like any recreational hobby, they can pull kids away from schoolwork,” DeCamp said. “So, it’s important for parents to monitor the amount of time they spend on video games.”

“Feeling their gaming struggles: what are their challenges?” he said. “What worlds are they conquering? What challenges are they overcoming when they play games, and why is it fulfilling to them?”

Parents who know the inner workings of their child’s gaming will better understand game flow and cycles, making it easier to set limits that satisfy the child’s needs, Ratan said.

“Understand what it is about the games that they like and then how they can fulfill those needs while also recognizing that there are other needs that are healthy that they should be fulfilling with balance,” he said.

Like a game of Fortnite, each child is different. Management strategies can be catered to individual needs. Done properly, video games can greatly improve a child’s life, Ratan said.

“All of these activities are building pathways in players’ brains that can be used in other contexts, often toward pro-social, pro-learning ends,” he said.