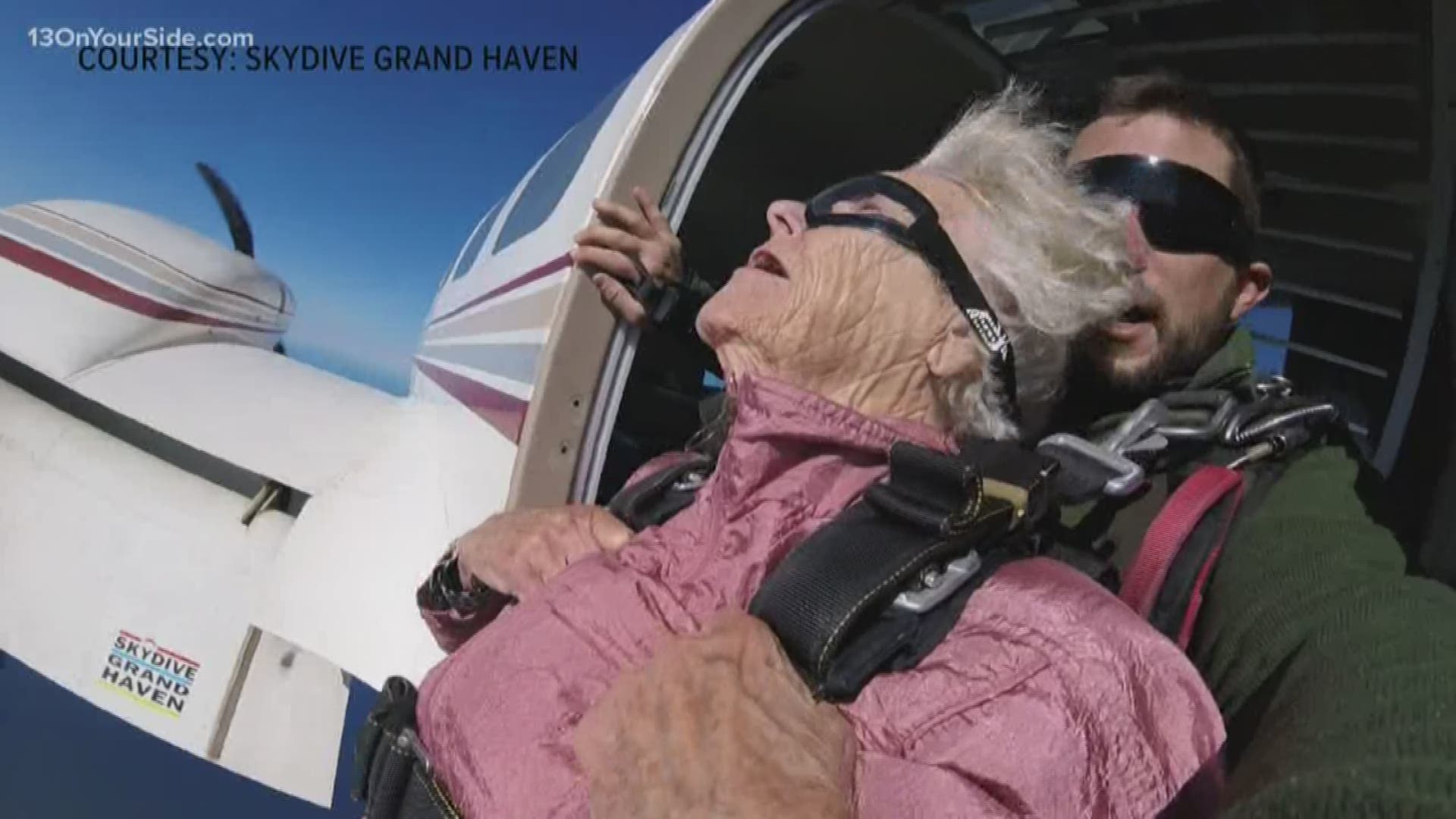 Dave Vincent, a tandem instructor with Skydive Grand Haven, strapped 10 pounds of harnesses on the agile 94-year-old Sunday morning and explained that they would jump at 10,000 feet, then free-fall to 5,000 feet, where he would deploy the chute.

“When we get out of the plane, all I need you to do is arch your back,” Vincent said, as Hartweg arched and threw her arms out to her side to practice.

She remained calm through days of delays, the training, and the pre-jump waiting.

“No nerves,” she reported Sunday just before boarding the plane that would take her skyward. “It's not good to get all uptight. I might start breathing too heavy and get my heart pumping too much. I'm donating my body to science, so if I come down in a crash, they'll send my parts to the school.”

The tandem jump was a gift from her children, who were present to watch.

With sun glistening down, Hartweg climbed into the airplane with several other jumpers. The plane taxied, took off westward then circled until it climbed to 10,000 feet.

Vincent and Hartweg made the leap, becoming just a speck in the sky, until their navy and white chute popped open for the soaring journey land-ward. Upon approaching the ground, Hartweg stretched out her legs and Vincent guided them in for a smooth landing.

Her grin beamed as bright as the sun above.

“I had no idea what to expect,” she said. “The minute you jump out of the plane and start whirring around, you think 'what was I thinking.' Then we got all straightened out and it was just a beautiful flight with the birds and the sky and everything. It was just gorgeous. I may even do it again someday.”

Her white hair whipped by the wind, Hartweg said she was happy to have made the journey safely.

“I can't believe I did it, but I did it,” she said. “You sure get wind-blown up there. I'm down here with no broken bones or anything. Ever since I saw George H.W. Bush do it, I joked about it. The last time I was talking to my kids, they were serious about it. They said 'hey, we'll pay for it for your birthday.' I thought, 'why not?' What better time can you do it? This time of your life you need some kind of adventurous thing."

Friday afternoon, Robbinswood served Chinese food for lunch. Sitting at her window-side table, Hartweg chuckled when she cracked open her cookie. The fortune read: “Courage is not the absence of fear. It is the conquest of it.”

The dining room was abuzz with residents talking about Hartweg's upcoming adventure.

“I'm not supposed to hit the ground hard or anything – the other guy is,” Hartweg told a fellow Robbinswood resident.

Tablemate Sara Young, 85, said she was excited for her friend.

“I think it's terrific, but I wouldn't do it,” Young said. “I'm chicken. I'll definitely say a prayer for her.”

Hartweg said she wasn't nervous at all. Living on the third floor, she's used to heights.

“I'm close to heaven already,” she said. “I'm up there with all the trees. I hope I don't land in one. I figured if I lived through this one maybe by the time I'm 100, maybe I can do it again.”

The jump had originally been scheduled for Wednesday, Hartweg's actual birthday, but rain dampened those plans.

Hartweg's daughter, Nancy Krause, and son, Daniel and daughter-in-law Ann, arrived from out-of-state to surprise their mom on her special day.

“I thought it might be kind of crazy, but what the heck, you're 94,” Krause said. “If you don't do it now, when are you going to do it? She's got a curiosity about stuff that she's instilled in us. We are never lost, we're always on an adventure. That's what life is all about – an adventure.”

“I think it's amazing,” Sibilla said. “I have never heard of another person her age interested in doing that. She's very calm about it and very determined. She wants to do things that other people might not think about doing. She's more adventurous than a lot of people are.”

Sibilla said Hartweg's spirit could benefit other older residents, even if they don't jump out of an airplane.

“I hope it gets others out of their shell and helps them become more confident in what they can do,” Sibilla said. “Seeing someone else do something like that might just help them take a leap themselves.”

Sibilla said Hartweg is frequently helping other residents – whether passing out weights for exercise class, pushing a resident in a wheelchair or taking a new person under her wing.

“Everyone here has their thing,” she said. “She takes it up a notch and helps a lot of people.”

This story orginally appeared in the Grand Haven Tribune.