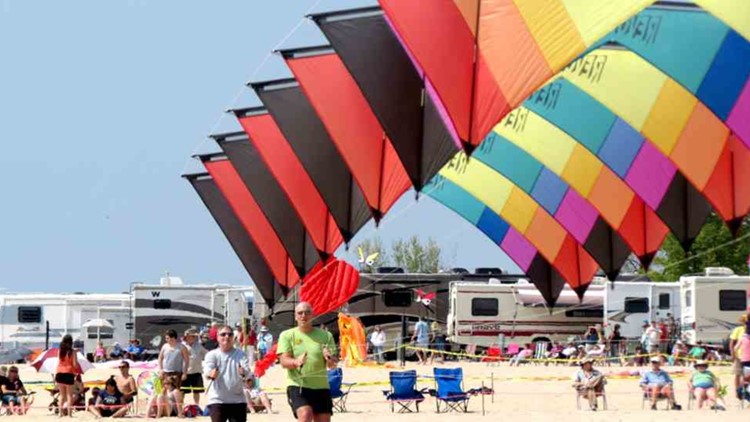 MACkite, which organized the Great Lakes Kite Festival throughout its 30-year history, decided that the 2018 event would be their last.

A new group, headed by Eric Wolf and his kite-flying team, the Chicago Fire, has picked up the pieces and will organize the festival going forward.

The Fire have performed at all 30 previous festivals. Wolf and fellow collaborators are taking up the mantle of putting on the event. The festival is expected to take place in May, and feature a similar lineup of teams and competitions.

“This was a big event for our team and all the family members associated with the team every year,” Wolf said.

The Great Lakes Kite Festival, in name, is retired, MACkite owner Lynn Negan said. The downtown Grand Haven business is taking a hands-off approach to the new iteration, except “as cheerleaders.”

“Tradition is being kept alive and we are beyond excited about that,” Negan said. “The people putting it on are knowledgeable kite flyers that understand what it takes to put on an event.”

Wolf said he and fellow organizers have set up a corporation and acquired a permit from the Michigan Department of Natural Resources. The new event will be called Kite Festival at Grand Haven.

Grand Haven City Manager Pat McGinnis said city officials were eager in 2018 to support other potential organizers for a kite festival, but the city’s assistance was not needed.

Despite poor weather conditions in recent years, turnout had not faltered at the festival, McGinnis said — especially during the 2018 farewell.

“The outpouring of love last year was indicative of how much people really do like it,” he said.

Wolf said flyers are expected from Canada and throughout the Midwest, including giant inflatable kites, choreographed musical routines using two-line and four-line sport kites, and space for the public to fly kites.

Marci Cisneros, executive director of tourism at the Grand Haven Area Visitors Bureau, said events like the festival are important during the “shoulder” months, when the local tourism industry is in a lull.

“Often times events held in the months of September through May can have a more significant economic impact than an event held in the middle of summer,” she said.

Local Chamber of Commerce President Joy Gaasch added, “As a community, those folks that are really passionate about the kite festival are going to rally around it and we’re going to make it happen.”

Visit the Kite Festival at Grand Haven Facebook page for updates on the new event.