Construction on the stadium is scheduled to be completed by Memorial Day 2018 and is estimated to cost $3.2 million. The cost is expected to be covered by charitable donations and a state grant. 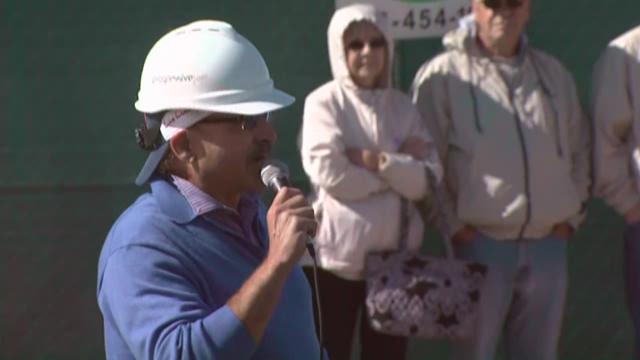 The City of Grand Haven and a large group of community supporters gathered on the city's waterfront on Friday, Sept. 29.

A groundbreaking ceremony was held at the site of what will become the new Lynne Sherwood Waterfront Stadium. The site is located in downtown Grand Haven along the Grand River, near the intersection of Harbor Drive and Washington Avenue.

“Our plan has been to begin construction at the end of summer, and this ceremony will mark the official start of that work,” said Pat McGinnis, Grand Haven City Manager. “After several years of carefully listening to the community and planning, we are excited to reach this point.”

Construction is scheduled to be completed by Memorial Day 2018 and is estimated to cost $3.2 million. The cost is expected to be covered by charitable donations and a state grant.

The new waterfront stadium will be in the heart of Grand Haven along the shore of the Grand River leading out to Lake Michigan. The facility will have a tiered grass seating, volleyball playing surface, seasonal ice rink, areas for dancing, a band shell, winter fire pits, concession stand, flagpoles and more.

The new stadium is named after Lynne Sherwood, a local philanthropist who died in 2016. Sherwood and her family have been philanthropic supporters of the community for decades.

The partnership between the City of Grand Haven, the Grand Haven Area Community Foundation, and a small community volunteer committee received approval of design plans by the Grand Haven City Council in 2015.

“Lynne Sherwood had a hand in supporting every significant fundraising initiative that has happened in our community during the last 15 to 20 years,” said Holly Johnson, President of the Grand Haven Area Community Foundation. "It's fitting that last year's $3 million gift from her estate helped kick off the stadium redevelopment project."

Earlier this summer, Grand Haven city officials approved a grant agreement with the state to receive $280,000 from Department of Natural Resources Trust Fund. As part of the agreement, the city agreed to a $674,900 local match.

The Grand Haven Area Community Foundation also announced this past August that the project had received a $25,000 gift from Fifth Third Bank.