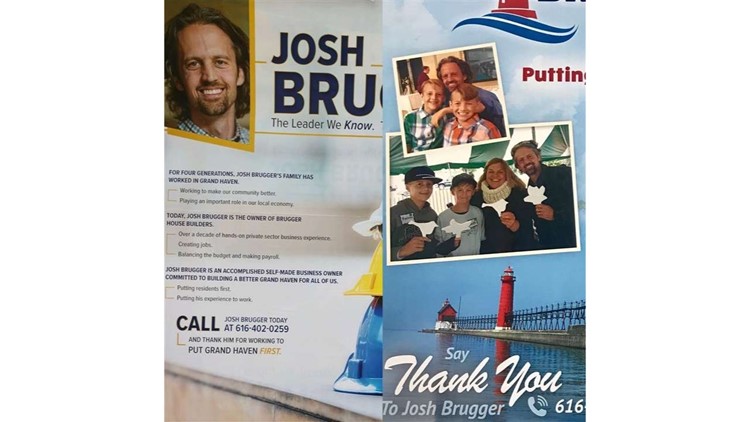 Photo by: Alexander Sinn / GHT
A pair of flyers asking recipients to "thank" mayoral candidate Josh Brugger went out to Grand Haven residents in the week prior to the primary election. Brugger said he was not involved in the mailers, which were paid for by a "dark money" political action committee.

GRAND HAVEN, Mich. (GRAND HAVEN TRIBUNE) - Josh Brugger said he was surprised twice this week when political fliers featuring his family’s faces and his personal cellphone number arrived in mailboxes across the city of Grand Haven.

The city councilman and mayoral candidate told the Grand Haven Tribune he had no part in the mysterious mailings, which were sent from a Grand Haven post office box and paid for by the West Michigan Community Preservation Fund.

The Lansing-based political action committee, or PAC, is using mostly untraceable funding sources to channel “dark money” into Grand Haven’s mayoral race, a tactic common in state and national political campaigns that is a growing trend in local elections in Michigan.

Brugger and Councilman Bob Monetza are running to unseat Mayor Geri McCaleb, who is running for a fifth term. The Aug. 6 primary will narrow the race to two candidates for the November general election.

Brugger, 42, said he and his wife, Jen, were made “uncomfortable” by a flier that went out Saturday containing family photos that include their children. He said they have both since altered social media settings to enhance privacy.

Brugger’s campaign sent out a postcard Thursday asking for voter support, the same day another flier from the West Michigan Community Preservation Fund went out.

During his campaign for City Council in 2015, Brugger filed a complaint against Grand Haven native Brandon Hall, who during that year’s election sent out mailers supporting Brugger through a PAC taking aim at the removal of the cross and Nativity scene on Dewey Hill.

The anonymity of the West Michigan Community Preservation Fund PAC hinges on its 501(c)4 nonprofit status, according to Craig Mauger, executive director of the Michigan Campaign Finance Network. Among the PAC’s past donors is former state Sen. Arlan Meekhof, a Republican and West Olive native. Bob DeVries, a former Meekhof staffer and lobbyist, was listed on the PAC’s board of directors in 2016, Mauger said. In 2016, that PAC had more than $106,000 in its coffers, Mauger added.

Meekhof has attended Grand Haven City Council meetings in recent months during discussions of a medical marijuana ordinance, which the council approved this year. The former Senate majority leader, who has consulted with the medical marijuana industry, sought to strip away key parts of the state’s recreational marijuana law before leaving office late last year.

While the City Council has been divided on both medical or recreational marijuana, Brugger is the only member of the council who supported the medical ordinance but opposes recreational establishments.

Meekhof did not reply to a request for comment from the Grand Haven Tribune.

Brugger said he is confused why a Republican group would attempt to get him elected.

“As a moderate, I have been fortunate enough to be supported by residents on both sides of the political aisle,” he said. “I believe it is important to find the middle ground.”

Neither of the fliers sent out by the West Michigan Community Preservation Fund mention the mayoral race or ask voters to support Brugger. They both contain biographical information and ask recipients to call and thank the councilman.

“If you don’t tell people expressly how to vote, you don’t have to disclose where your money is coming from and you don’t come under regulations,” Mauger explained. “We might know of some of the smaller donors, but we don’t know most of them.”

Ottawa County Clerk Justin Roebuck said he is unaware of “dark money” campaigns aimed at local elections in the county. He said the family photos on the fliers could have been legally obtained from public social media posts. Individuals running for office submit their phone numbers and emails to the county, he said, and the information is retrievable through a Freedom of Information Act request.

PAC activity is legal under Michigan campaign finance law, as long as the candidate is not “colluding” with the PAC by sharing specific details or signing off on PAC expenditures, according to Roebuck. The county clerk said the West Michigan Community Preservation Fund has not filed any expenditures with Ottawa County.

Brugger said his campaign self-imposed a $250 limit on contributions, and accepted donations from individuals only. His campaign has raised more than $3,000, which he said has paid for a letter mailing, Thursday’s postcard and yard signs. The councilman said he was offered PAC money in a “surreal” passing encounter with a local individual, but he declined.

“While it is above my pay grade as a local elected official, I am strongly opposed to any funding tool that hides the business or political affiliation of a donor,” Brugger said.

Mauger, whose organization tracks campaign spending in the state, said dark money has been a factor in political races in Lansing, Detroit and Ann Arbor. He said there has been little recent interest from Michigan’s Legislature to improve transparency in political spending.

“These types of tactics are becoming commonplace even in local races, trickling down from the state level,” Mauger said.

Roebuck said it is plausible that candidates could be just in the dark as the public about a PAC apparently supporting his or her campaign.

“Things need to be transparent,” the Ottawa County clerk said. “For a group to support a candidate is one thing. We just need to be able to know who has paid for what. At the end of the day, we don’t write the laws, but we do have to enforce them.”