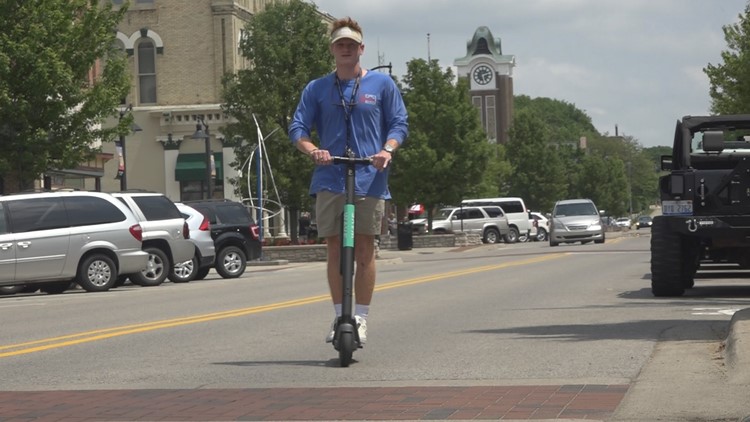 GRAND HAVEN, Mich. — (Grand Haven Tribune) - While a few setbacks have halted a new, local scooter business, its young owner says he hopes to have the alternative mode of transportation rolling again soon.

Collin Reenders, the 19-year-old entrepreneur behind the Wave Scooter Co., said he has experienced some technical glitches in getting the venture started and running since the 2019 Grand Haven Coast Guard Festival. He hopes to work out a few bugs in the next week or two to give users a better experience for as long as the weather permits.

With the previous software, Reenders said customers experienced some issues with low reception, and he would need to call China to resolve other issues. Now, the Grand Haven resident and Hope College student plans to work with a California-based company for his software.

He also is partnering with a startup business, Kuhmute, to provide a cleaner docking and charging solution for users.

“This is very low profile,” McGinnis said. “This would really cut down on the incidents of people leaving them laying around.”

McGinnis noted that Reenders has been given permission to try the new docks at previously approved locations where he kept the scooters corralled.

The new docks would each be able to hold and charge three scooters, and would connect to the city’s power supply through light posts. Each dock would stand approximately 32 inches high and would be a little more than 6 feet long.

“I’m assuming with the new and improved software and docking systems … scooter uses per day will steadily increase,” Reenders said.

Reenders noted that, just a month into the business, each scooter had received an average of at least one ride per day, and about 40-50 rides each since the venture was launched. More than 1,400 individuals have downloaded the Wave Scooter Co. app, and some of the most common trips include riding from the downtown area to the beach and from Chinook Pier to downtown.

One of the best parts of starting up his own business so far, Reenders told city officials, has been “chasing my passions for business and entrepreneurship, and overall providing an awesome service to my hometown (and has) helped me to understand what I’m capable of.”