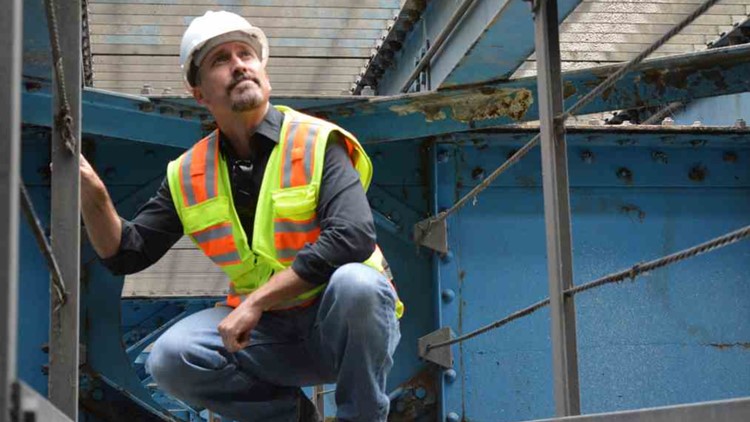 Photo by: Courtesy of Grand Haven Tribune
MDOT Grand Region spokesman John Richard kneels beneath the U.S. 31 drawbridge during a tour of the facility on Wednesday. May 22, 2019

MDOT: 'A million things that have to go right’ to fix Grand Haven drawbridge

GRAND HAVEN, Mich. (Grand Haven Tribune) - At a glance, a drawbridge is a simple machine. It goes up to let boats go by, and it goes back down to allow cars and trucks to go over it.

But the U.S. 31 drawbridge over the Grand River doesn’t always work smoothly.

The mechanisms underpinning the drawbridge are not simple. Some of the equipment is brand new, while other parts span the structure’s 60-year history.

Officials with the Michigan Department of Transportation walked through the bridge tower Wednesday to highlight the intricate working parts of the operation, including upgrades they say have made the bridge work “beautifully.”

RELATED: Grand Haven City Manager: 'It is time to build a new bridge'

Shawn Wigent, an electrician specialist with MDOT, stood at the bridge control panel above the roadway and the Grand River. He explained how bridge operation occurs in a sequence: Traffic signals go red, then the gates go down. Locks are pulled and released, and the bridge is fully opened. Once that process is complete, it happens in reverse with the same set of protocols, Wigent said.

On Memorial Day 2018, a limit switch that is necessary for that sequence got “stuck” on. Its indicator stayed lit on the panel while the bridge was open, and wouldn’t turn off to allow the sequence to continue.

Wigent is the first person to get a phone call when something goes wrong. Local contractors start making their way to the site, while experts attempt to talk the bridge operator through the procedure. Remotely, Wigent can review electrical printouts to find out what went wrong and help fix it.

“There’s a million things that have to go right,” he said.

Replacing small pieces like the limit switch is a challenge for the aging bridge. MDOT Grand Region spokesman John Richard said the bridge has been upgraded “piecemeal” since 1958 — slowly and when funding is available. The state is lagging behind on infrastructure funding, which is a key fight in Lansing over Gov. Gretchen Whitmer’s first budget.

An overhaul of the bridge components this winter led to around 50 test runs, MDOT engineer Christopher Idusuyi explained. The $850,000 in work included rehabilitation of electrical and mechanical components such as limit switches, a new bypass of the limit switches to prevent another delay like last Memorial Day weekend, new relays, and upgrades to the auxiliary drive motor.

The main motor drive will be replaced next year, Richard said.

A new breaker system is located downstairs from the control room. Farther below the road, catwalks connect the tower to four chamber rooms where the bascule and drive systems are located. Here, thundering overhead traffic shakes the foundation. A hatch provides access to a catwalk system just beneath the porous bridge, where shadows of vehicles zip by above. In the chamber rooms, shelves are filled with metal weights to keep the bridge in balance.

Across the state, MDOT operates 11 bascule bridges and one vertical lift bridge, but none face as much traffic as the U.S. 31 bridge at Grand Haven. About 60,000 vehicles cross the bridge on an average day, and that traffic spikes to 120,000 per day around peak summer holidays.

In addition to wear and tear from vibration, Richard said, salt and corrosion are constant battles that require regular cleaning and annual inspections. When these elements cause damage, there is often no warning.

“This is probably the harshest environment you could put a bridge next to,” the MDOT spokesman said.

Testing this spring caused traffic delays multiple times, but Richard said the kinks have been worked out. He said the bridge is “very reliable” and “structurally sound.”

“The bridge getting stuck after the recent upgrade has to do with synchronizing and aligning the new drives with the existing main drive motor, and that issue has now been resolved,” he said.

Local officials have questioned whether the bridge should remain another 60 years. Replacement with a stationary fly-over bridge, Richard said, would require a 60-foot clearance, it would need to start around Jackson Street in Grand Haven and would cost around $400 million.

The bridge falls under federal regulations for Great Lakes and rivers, Richard said, which state the drawbridge must open “promptly and fully” for vessels when a request is signaled. These rules are enforced by the U.S. Coast Guard.

The recent upgrades did provide an unintended benefit. From red to green traffic lights, Wigent explained, the bridge now only requires about seven minutes of operation, while it used to take about nine. Since the beginning of the boating season, he said, it has worked flawlessly.

“This thing’s been beautiful,” Wigent added.