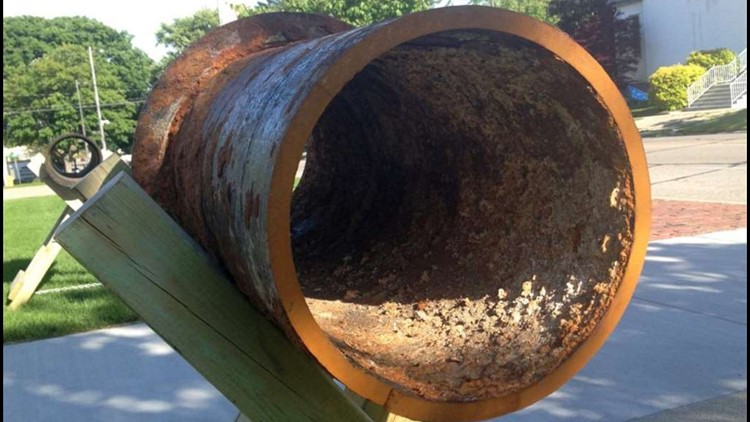 Photo by: Grand Haven Tribune
This old pipe was on display in front of Grand Haven City Hall to illustrate the city's aging infrastructure.

GRAND HAVEN, Mich. — (Grand Haven Tribune) - Almost half of the service lines in Grand Haven contain lead, and a state rule requires the city to replace them.

All municipalities in Michigan have until 2020 to complete an inventory of lead lines. By 2025, the city needs a verified inventory, which requires digging up lines and checking for lead construction.

Gajdos asked City Council on Monday to approve a cap of $500 assistance per residence. Residents will be required to replace the lines. The portion of lines belonging to residents could cost up to $2,000 to replace, Gajdos said. If one portion of the line contains lead, the entire line must be replaced to prevent contamination.

The city’s portion of a service line replacement could cost up to $2,500, Gajdos said.

The City Council voted Monday to postpone setting a cap for assistance until the action is more clearly defined through a resolution. Councilman Bob Monetza called the $500 cap an “arbitrary” measure, while Mayor Geri McCaleb said the city has higher priorities.

“It’s like fixing something that’s not broken when we have a lot of other things that need to be fixed,” the mayor said. “I’m not exactly sure, with all of this up in the air, why we’re doing all this right now.”

Councilman Dennis Scott said he is not opposed to setting the cap as a placeholder as the rule is sorted out.

Council members expressed a need for clarity from Lansing on the new rule, a portion of which is under litigation to determine its constitutionality.

The rule, authorized by former Gov. Rick Snyder, enforces the strictest standards for lead levels in drinking water, a response to widespread lead contamination in Flint.

This past June, the Michigan Department of Environmental Quality acted to lower the state’s lead level standard from 15 parts per billion (ppb) to 12 ppb by 2025, and require municipalities to replace lead lines within the next 20 years.

A minimum of 5 percent of pipes must be replaced annually, which Gajdos said would be around 100 in Grand Haven. If water sampling discovers an exceedance of the contamination standard, replacement of 7 percent of lines would be required annually.

The undertaking would likely require hiring two Department of Public Works employees, Gajdos said, and could require a half-million-dollar investment each year. The overall cost for replacement of lead lines in the city could total more than $5 million in public lines and up to $4 million in private lines.

Following the replacement of pipes, water sampling will be required after 72 hours, and again after 30 days.

Residential water sampling is conducted in Grand Haven every three years, including 2019. The 15 ppb standard has never been exceeded in the city, Gajdos said.

The city is expected to complete its initial inventory at the end of January.