'I hear it. I know it. I've lived it,' GRPD chief responds to cries for change from protesters

"We've had a breakdown and it's been there for a long time and it took an event, a murder by a police officer in Minnesota that has raised this to a new level." 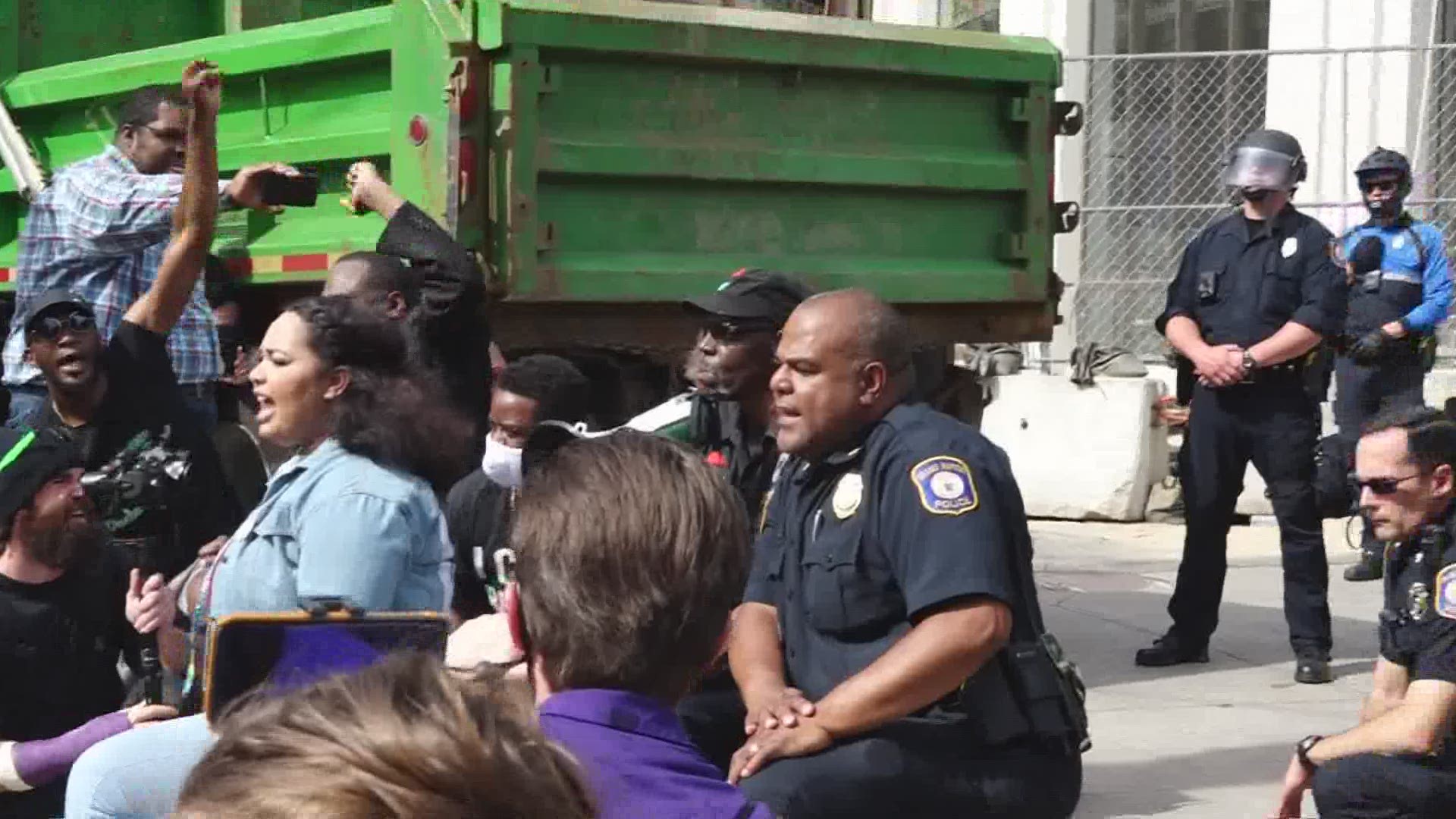 GRAND RAPIDS, Michigan — For several days this week, chants of "I can't breathe," and "Black Lives Matter" echoed through downtown Grand Rapids as protesters march in solidarity with George Floyd and against police brutality.

When asked if he could understand why the protests continue, Grand Rapids Police Chief Eric Payne said he can appreciate it.

"We've had a breakdown and it's been there for a long time and it took an event, a murder by a police officer in Minnesota that has raised this to a new level. It's time for us to start addressing it," Payne said during a Thursday interview.

Following a peaceful protest Saturday that drew out thousands of people, there were over a hundred businesses looted, windows of government buildings smashed and police cruisers were set on fire. Police responded with methods like tear gas and rubber bullets.

RELATED: Grand Rapids Police investigating video of man appearing to get shot in the face with tear gas

The police department is still investigating and making arrests tied to the riot. There was initial discussion of outsider agitators coming into the city to cause violence, however, arrests made so far show that police have charged people both locally and from out of town. Some of those involved in the damage, Payne says, were part of the original protest on May 30.

"I think it was a small majority, small amount of people that were in that group, but they came with the intent to do what they did," Payne said.

The National Guard and multiple other law enforcement agencies were called up to help block off portions of downtown as a result, and now, even during peaceful protests, officers in riot gear stand ready. The city enacted a 7 p.m. curfew Sunday and Monday, which resulted in the arrest of multiple peaceful protests on both days.

Payne and the police department have primarily been supportive of one protest in particular. It was a planned sit in that involved people lining Fulton Street West and later kneeling for nine minutes while chanting "I can't breathe;" Payne and Kent County Sheriff Michelle Lajoye-Young participated.

The organizer of that event, Aly Bates, called for a meeting with the police chief about how to move the city forward, which he says will happen before next Wednesday. The city also held a virtual discussion Friday on local policing. Meaningful dialogue, Payne has said, will be the key to change in Grand Rapids.

But, protesters have asked for more action after seeing Chief Payne kneel briefly Wednesday. More both from him and from the department.

Some people who stuck around following the planned Wednesday sit-in took part in spontaneous a multi-mile march that reached East Grand Rapids and ended in front of a police barricade made up of Kent County Sheriff's Deputies at Fulton Street East and Sheldon Avenue NE. Protesters there pleaded with officers to take a knee and show a genuine sign of solidarity, and promised they would disperse if that happened.

RELATED: ‘Thank you, thank you’ Protest disperses after 3 deputies kneel

After several deputies took a knee, the group erupted in chants thanking them and shook their hands before leaving the downtown area. Chief Payne said that's exactly what needs to happen.

"Those officers acted independent they were not ordered to do that, they did that on their own accord," Payne said.

From the very first protest on Saturday, Chief Payne said "I hear you," when asked what that means, he said he's lived the issues that are the forefront of these protests.

"When I was appointed to this position, I made a point that I have been a police officer for over 30 years, but I've also been African American all my life, very proud of it. I know the struggles that have occurred with law enforcement, I know the struggles between law enforcement and people of color," Payne said. "I hear it. I know it. I've lived it. I've not always been a police officer. Sometimes I have to take this badge off, and I will still be African American living in America."

There is another anti-racism protest planned for Saturday at 4 p.m. in Rosa Parks Circle.