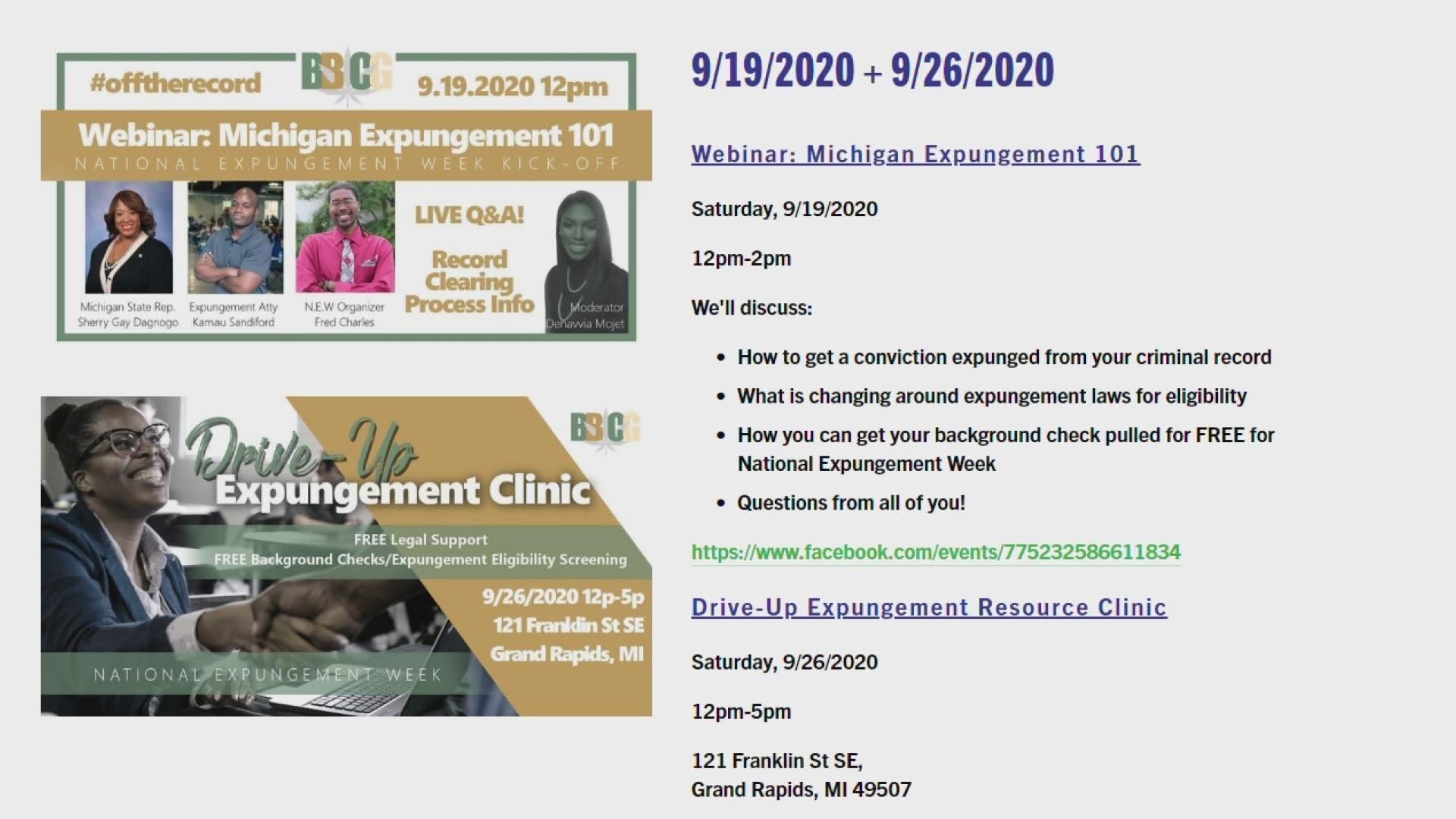 GRAND RAPIDS, Mich — After Grand Rapids Mayor, Rosalynn Bliss, signed a proclamation in 2019 recognizing a Grand Rapids 'National Expungement Week' the city was added to a national roster that helps sponsor some grassroot organizations that hold events related to removing criminal convictions from an individual's record.

One of the events sponsored by NEW this year, an expungement clinic being hosted on Saturday, Sept. 26.

The Black and Brown Cannabis Guild  (BBCG) invited NEW to their annual program, where NEW will cover the background check registration fee that individuals had to pay last year.

National Expungement Week (NEW) was born out of a restorative justice initiative to help people previously convicted for felonies during the war on drugs, especially for marijuana possession which is now legal in certain states. Getting criminal offenses off records allows individuals to apply for jobs and housing, something people with felonies usually get turned down from.

In Grand Rapids, BBCG co-founder, Denavvia Mojet says she became an advocate for expungement work to ensure people get free legal help to complete the often lengthy, expensive expungement process. Once Mojet  found out about NEW, her organization became one of the grassroots partnerships to bring the organization to the city.

“Expungement is an important point of discussion for us, since now marijuana is legal in most states. But once we got into the work we realized so many more people were eligible for expungement that didn’t know how to navigate the system,” said Mojet.

The first step in the process is a background check. Michigan State Police must run it for a complete record of criminal history in order to find out if someone is eligible.

“People looking are allowed up to one felony and two misdemeanor offenses at a time. It has to be a five-year period since they got the offense and then we have to make sure their offense is expungeable. Drinking under the influence, and criminal sexual conduct cannot be expunged,” said Kamau Sandiford, a local expungement lawyer.

Sandiford works for Cooley Law School's Access to Justice clinic, a city resource known for doing expungement work, partnering with the BBCG for a second year.

Another resource, The Women’s Resource Center (WRC), helps woman get job placement from all walks of life, including connecting some with expungement workers.

Even though their work is not related to this weekends clinic, they are excited that Grand Rapids will be able to tap into national resources to hopefully help even more women who were previously incarcerated get jobs.

“We know if someone gets a crime expunged they can get employed, and get housing. There’s a 25 percent income increase for people that get expunged and that’s huge,” said Michelle Bryk, the WRC program director.

Not all expungements end in favorable with outcomes, with a judge making the final call. If denied it can take up to three years to file again, according to Sandiford.

“More so than the nature of the offense, the post-conviction behavior will be paramount to determining whether they are successful or not,” Sandiford said.

The clinic being held this Saturday will be screening people to see if they are eligible to participate in the expungement process. The event runs from 12-5 p.m. at 121 Franklin St. SE.

If you want to participate, you can pre-register here, which is encouraged by the organizations hosting the event. Learn more about the process on Cooley Law School’s Expungement Clinic’s page.