Adoption finalization hearings are typically straightforward. There's a legal template the judge and all other participants involved in the adoption follow closely. 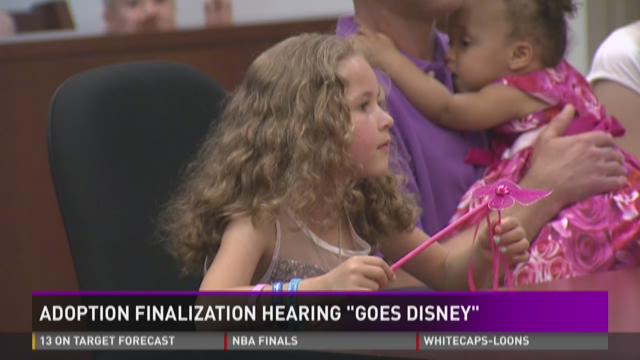 Adoption finalization hearings are typically straightforward. There's a legal template the judge and all other participants involved in the adoption follow closely.

Except for the one that unfolded Wednesday, June 8, at the Kent County Courthouse.

Jim and Sarah Koning adopted two children. One of them is named Danielle. She's 5 years old and is big into Disney princesses. So, to make her adoption day even more special, Judge Patricla Gardner took off her robe and revealed she was dressed up as Snow White.

Then, before the proceedings began, all the rest of the Disney princesses, and Prince Charming, dressed in costumes, entered the courtroom to support Danielle and her adoption.

Soon after, Danielle Koning was introduced.

Disney World is known as the "Happiest Place on Earth." On Wednesday, it was replaced by Courtroom 9-D.

"It was a lot of fun," said Danielle after the hearing had concluded. "I was happy to see all the princesses who came for me, and I really liked what they said to me."

Gardner says she has never seen such a creative adoption finalization hearing in her career on the bench.

"Never; never have I seen so many princesses in the courtroom before," Gardner said. "It was child-centered to make a kid feel special, and at ease at what can be a difficult hearing."

After the hearing was over, Danielle got to get her picture taken with all the Disney princesses, and Prince Charming, in the middle of the courtroom.

This creative adoption hearing was organized by Samaritas Foster Care Program and Child and Family services of Grand Rapids.