GRAND RAPIDS, Michigan — The Kent County Sheriff's Office will no longer hold a detainee for Immigration and Customs Enforcement (ICE) unless a judge has signed off on it.

On Friday, the Kent County Sheriff's Office and Grand Rapids Police issued statements responding to reports that they turned over a U.S. citizen to ICE back in December. Jilmar Ramos-Gomez's story unraveled Wednesday as members of the American Civil Liberties Union joined by other immigration attorneys brought attention to the 27-year-old's detainment.

Ramos-Gomez, who was born and raised in Grand Rapids, is a former Marine who served in Afghanistan. He was arrested for trespassing onto a helicopter pad at Spectrum Health in November 2018. In a statement released Friday, Grand Rapids Police said they contacted federal authorities due to the nature of the offense, which they said provided a risk to federal airspace. Ramos-Gomez's mother went to pick him up from Kent County Jail on Dec. 14, only to learn he had been turned over to immigration authorities.

Ramos-Gomez spent three days in immigration detention before authorities reviewed his personal documents. In a written statement, ICE agents said Ramos-Gomez described himself as an undocumented immigrant during interviews at the jail. An official wrote in an email Friday that "ICE officers acted in good faith with the information they had available."

Ramos-Gomez's family says he suffers from post-traumatic stress disorder and is currently receiving treatment at a mental health facility.

News of the arrest made national news on Wednesday and it reignited the argument that Kent County should end its agreement to detain immigrants for ICE.

Kent County Sheriff Michelle LaJoye-Young said during a press conference that this change to the process between the county and ICE will take affect immediately. But, she could not say whether it would impact anyone currently in custody.

An ICE official said in an email Friday that the outcome of this decision by the Kent County Sheriff "will be the release of foreign-born criminals back into county communities."

LaJoye-Young said the sheriff's office does not have the ability or authority to check a detainee's immigration status.

"We did not contact ICE regarding his incarceration," she said. "During our review of this incident, it was established that the Grand Rapids Police Department contacted ICE in conjunction with their arrest and investigation."

GRPD said in their statement that contacting ICE is not a routine part of the investigative process, however, in this case the federal authorities were contacted because "it is standard for local police agencies to contact federal authorities any time there is a possible act of terrorism."

Sergio Cira-Reyes, a volunteer organizer with Movimiento Cosecha, said they were disappointed to see that a war veteran who struggles with mental health issues was labeled as a possible terrorist.

GRPD's statement emphasized that the police department's priority is keeping the community safe. "We want to reassure the community that safety – not immigration status – is our No. 1 priority"

According to data from the Transactional Records Access Clearinghouse (TRAC), Kent County has detained more than 2,200 people on behalf of ICE since the early 2000s. More than any other county in the state of Michigan.

Cira-Reyes said that the sheriff's announcement is a step in the right direction. However, he said Cosecha's ultimate goal is to see an end to the county's contract with ICE.

See the Sheriff's Office statement and email to ICE here: 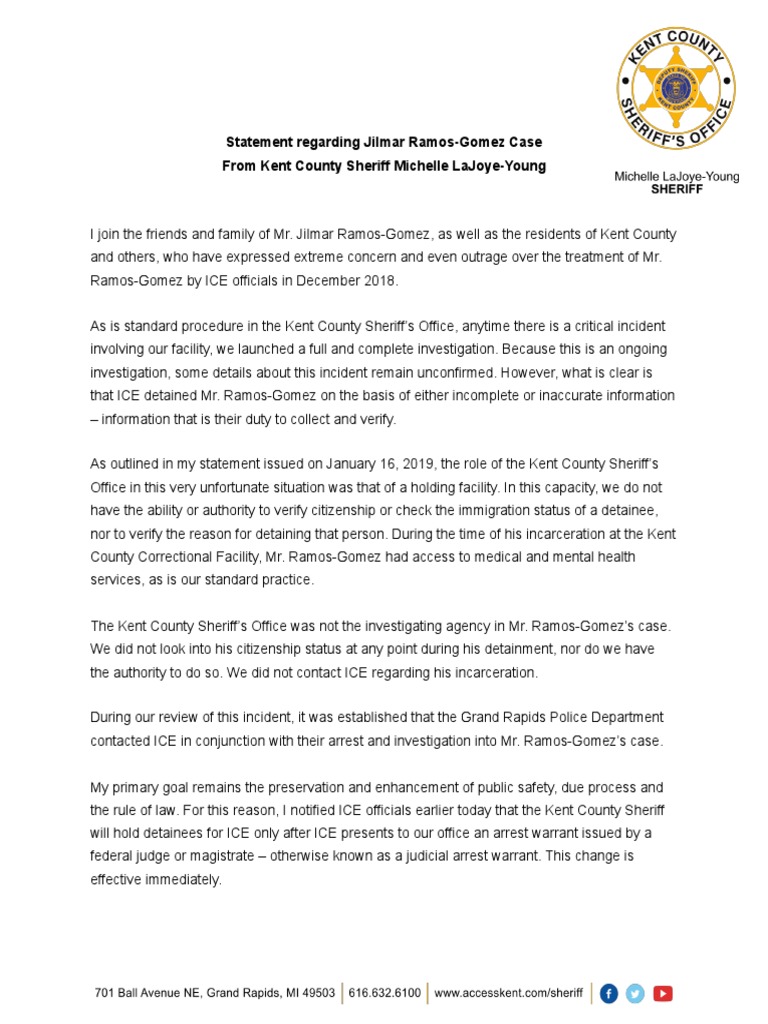 Statement from Kent County Sheriff and email to ICE
My primary goal remains the preservation and enhancement of public safety, due process and the rule of law. For this reason, I notified ICE officials earlier today that the Kent County Sheriff will hold detainees for ICE only after ICE presents to our office an arrest warrant issued by a federal judge or magistrate - otherwise known as a judicial arrest warrant.

An ICE official issued the following response to the announcement:

"There is no such thing as a judicial warrant for administrative immigration violations. The only outcome of this decision by the Kent County sheriff will be the release of foreign-born criminals back into county communities. While it is unfortunate that Mr. Ramos-Gomez’s false claims to foreign citizenship resulted in his brief detention, Kent County should not succumb to the ACLU and activist organizations’ relentless attacks against effective immigration enforcement that keeps criminals off of the streets.

There is no authority or legal mechanism for a judge or magistrate to issue a criminal warrant for an administrative immigration arrest. Sanctuary policies such as these fail to recognize federally established processes for the enforcement of immigration law, as established by Congress."