Twelve people were arrested for violating the city's 7 p.m. curfew.

About 200 people gathered in downtown Grand Rapids throughout the afternoon and evening to protest police brutality and stand in solidarity with Minneapolis after the death of George Floyd. Police had urged people not to participate in the "unpermitted" rally at Fulton Street and Ionia Avenue.

Another small gathering occurred in Veterans Park on Fulton Street near Sheldon Avenue.

A barricade was set up prior to the event along Fulton Street around the Grand Rapids Police Department. The Michigan National Guard and Michigan State Police assisted.

Grand Rapids remains in a 7 p.m. - 5 a.m. curfew, which was put into place after Saturday night's unrest. Prior to the curfew going into effect, law enforcement made announcements on a loud speaker warning the crowd about the deadline.

When the it went into effect at 7 p.m., police advanced on the remaining protesters using tear gas and non-lethal rounds to disperse the crowd. Those who did not leave were arrested.

The statement said 12 people were taken into custody for violating the curfew. The first night of the curfew, Sunday, nine people were arrested.

RELATED: Police arrest some protesters as curfew goes into effect in Grand Rapids 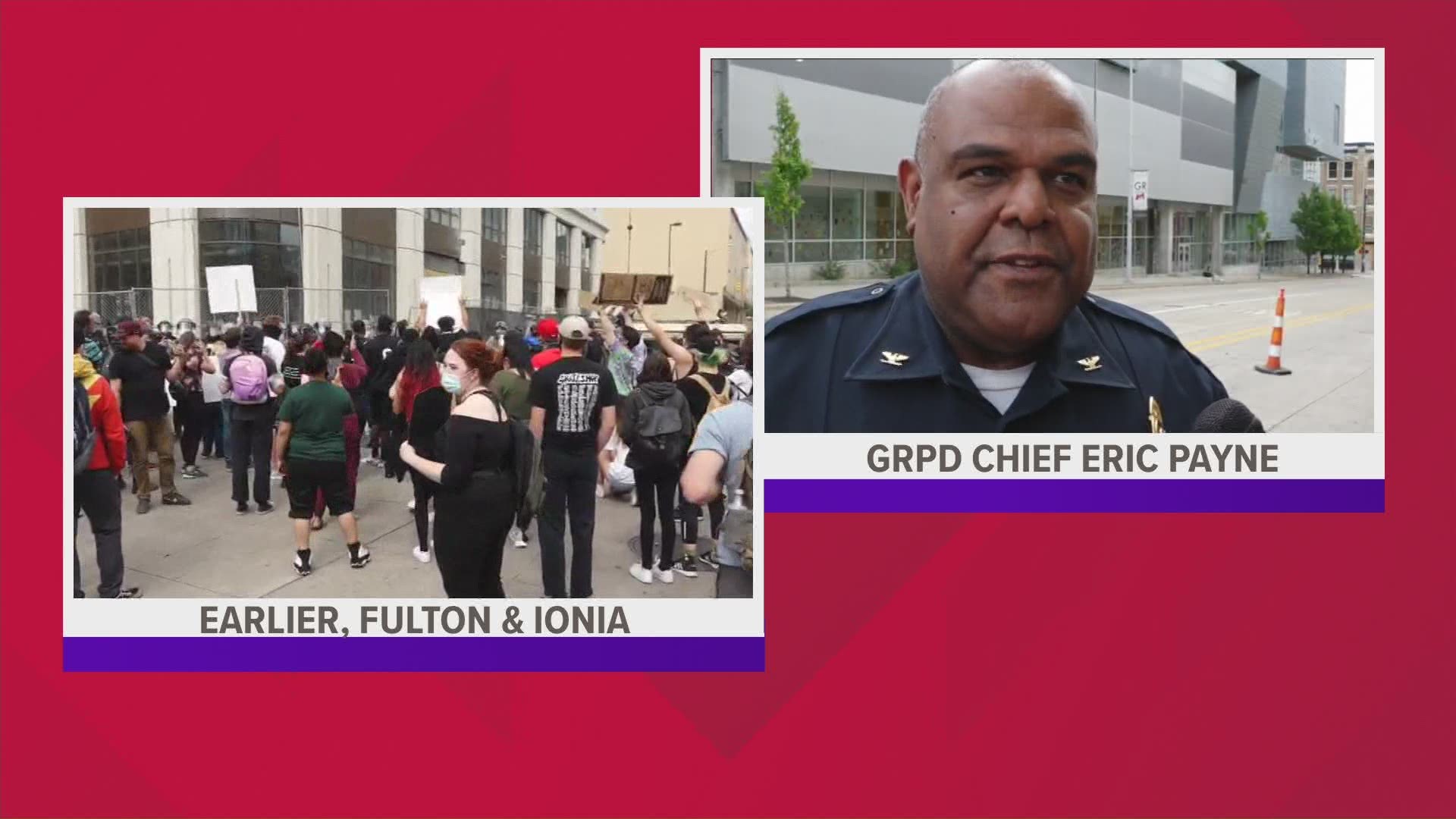 “My heart is heavy tonight,” Payne said in a statement. “In less than 48 hours, our city has seen multiple protests, destroyed property and a level of violence that has put our entire community in jeopardy. I cannot count how many times I have tried to have conversations with organizers and protesters. I’ve heard them. The entire city has heard them. We’re ready to continue the hard work we’ve been engaged in and start looking at new strategies to move forward.”

Ahead of the protest, Grand Rapids Police attempted to contact the organizers of the event. But Payne said despite their efforts, they were not able to get in touch with anyone leading the rally.

“I’ve experienced a roller coaster of emotions the past couple of days,” Payne said.  “From the low feeling of sadness and frustration on Saturday night to the high of appreciation Sunday morning when hundreds of people came out to clean up the downtown area. I am grateful to the community and our partners for all their help and support."

Grand Rapids Mayor Rosalynn Bliss issued an order of civil emergency Sunday after about 100 businesses and buildings were damaged downtown. This also activated the Michigan National Guard to assist in the city in policing and repairing the damage.

The Kent and Ottawa sheriff's departments, Wyoming and Kentwood police departments and the FBI helped secure the downtown area.

“While policing civil unrest is difficult, we still hold ourselves accountable for all of our actions,” Payne said. “We are committed to Grand Rapids being an inclusive and welcoming city where all community members can peacefully exercise their freedom of speech in a public forum.”

During a press briefing Monday evening, Payne said he has been in contact with organizers of a Wednesday rally. He said he plans to participate in that one.

1 / 29
WZZM
At 7 p.m., a line of protester kneeled in front of the barricade as the curfew went into effect. 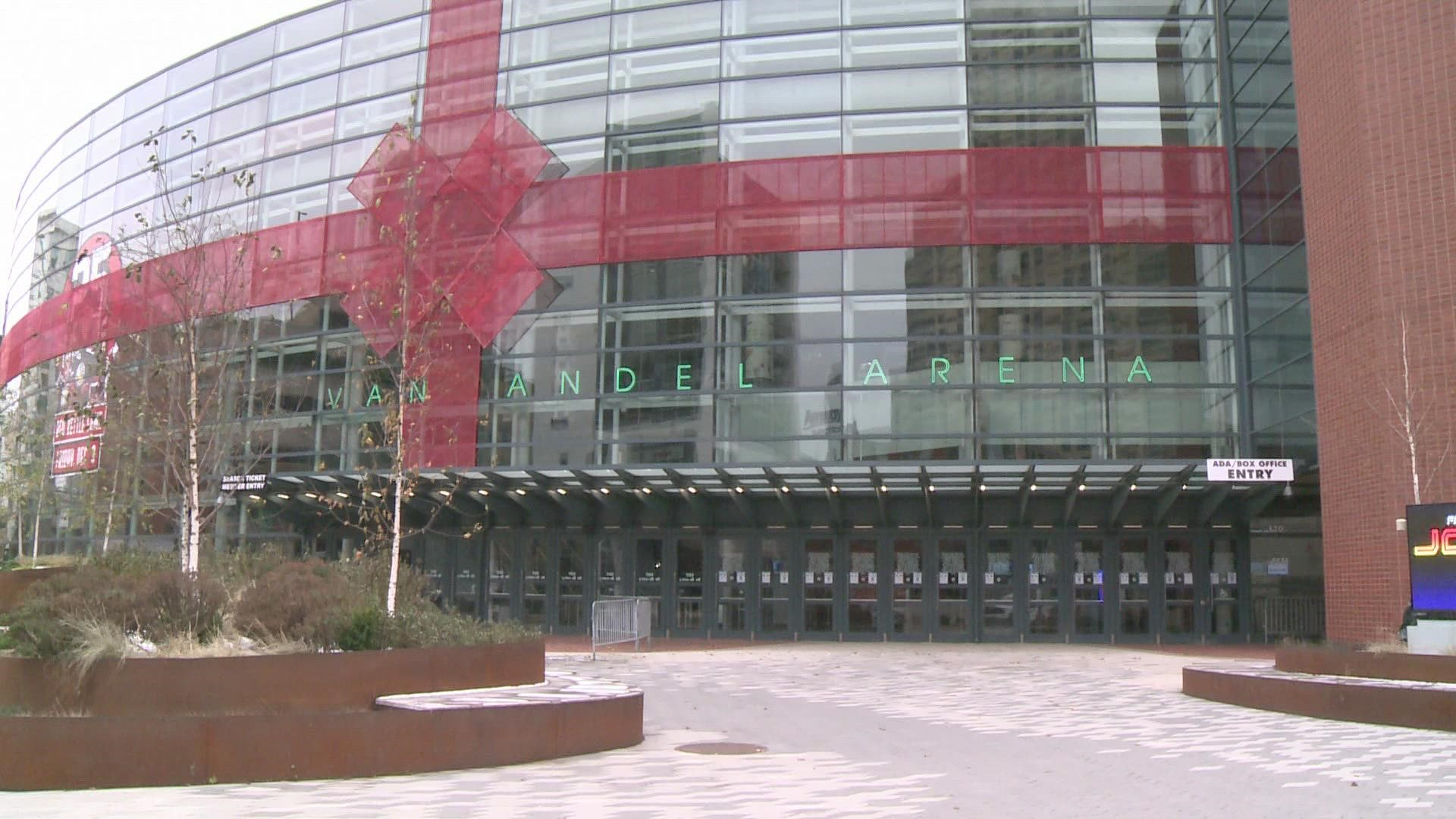