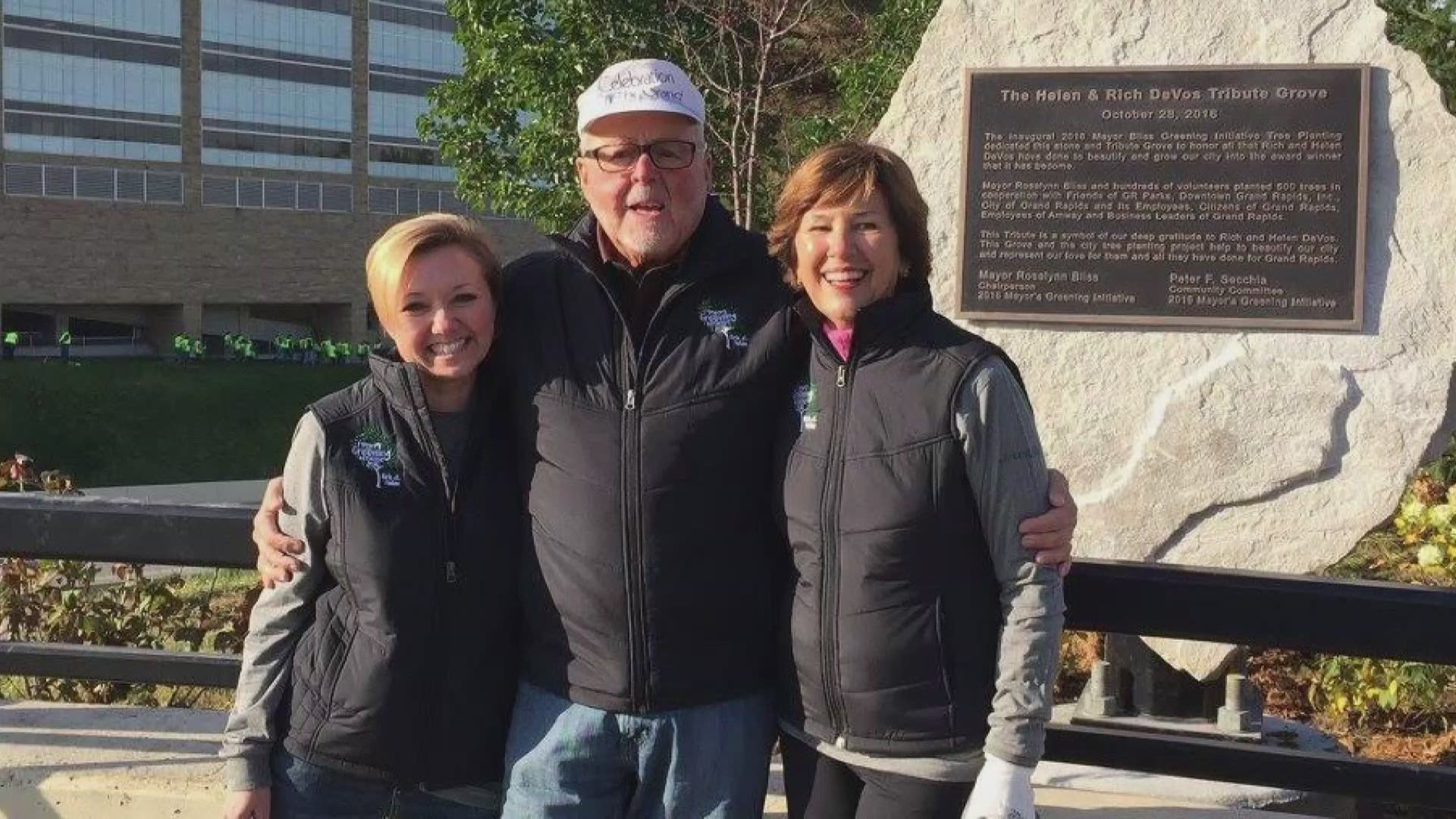 GRAND RAPIDS, Mich. — Organizations and local leaders have taken to social media and released official statements in response to the death of Grand Rapids businessman and philanthropist Peter Secchia. He died Wednesday morning at the age of 83.

A spokesperson for the family said Secchia experienced health issues for several months and was receiving nursing care from home. He recently contracted COVID-19, which the spokesperson said was a contributing factor to his death.

Secchia was also an integral part of the Kent County GOP. He volunteered for the Republican Party through the 1960's and 70's. According to a statement from the Kent GOP, he engaged and inspired a new generation of political activists when he formed the Kent County "Scatter Blitzers" during Gerald R. Ford’s presidential campaign of 1976.

Secchia held a variety of leadership positions within the GOP. He served as the Chairman of the Kent County Republican Committee, Congressional District Chairman, Michigan’s National Committee Member, Vice Chair of the Republican National Committee for the Midwest Region, and was appointed U.S. Ambassador to Italy under President George H.W. Bush in 1989.

"As a business and community leader, Republican and Spartan, Peter always inspired those around him to be their best, do their best, and expect the best,” said Kent GOP Chairman Joel Freeman in a statement following news of Secchia's death. “From Grand Rapids, to Washington, to Italy and beyond, Ambassador Secchia left a legacy of service that will impact generations to come. No matter how far his business and political successes took him, he always came back to Kent County, back to his community, which will forever be changed for the better."

"The entire Kent County GOP family sends our sympathy to his son Charlie who is our Kent County GOP Treasurer, his wife Joan, and the entire Secchia family. Peter Secchia was one of a kind and he will be deeply missed by us and our community," the statement continued.

"We are deeply saddened by the loss of our great friend, Peter Secchia, and our hearts and prayers go out to Joan and their four children—Stephanie, Sandy, Charlie, and Mark. What a remarkable legacy Peter leaves behind. Whether he’s remembered as an entrepreneur rebuilding Grand Rapids, or as a philanthropist making life better for the people of Michigan, or as a counselor having the President’s ear, or as an ambassador bridging connections to Italy, Peter made things happen. He was bigger than life. Everything he did, he did with gusto. Just look at how he was devoted to his family, generous to his friends, fierce in his beliefs, and unwavering in his support for the causes he held dear.

Peter and our dad first met back in 1964, during one of our dad’s congressional campaigns, and it seems he’s been part of our family ever since. Dad and Mom treasured his playful sense of humor, good counsel, and abiding friendship; also the good-natured rivalry between a Spartan and a Wolverine. Our family will miss Peter. We will remember his generous spirit and be inspired by his determination to make everything he touched better than he found it.

Thank you, Peter, for letting us share in your wonderful life and journey.

Eternal rest grant unto him, O Lord, and let perpetual light shine upon him."

"Grand Rapids has lost an icon in the passing of Peter Secchia. More than a business leader, community leader and philanthropist, Peter was a giant in our community. My heartfelt condolences go to Joan and the Secchia family.

Peter’s love for this city and its economic success was second only to his love of Michigan State University, for which the community will remain indebted to him for his leadership in bringing MSU’s College of Human Medicine to the Medical Mile. There are countless new opportunities our region has experienced in the health sciences due to his efforts in strengthening MSU’s relationship with Grand Rapids.

His list of accomplishments and philanthropic endeavors will leave a lasting mark on our region. I am grateful to have worked alongside Peter on several projects, and will remain grateful for the opportunity to have known him."

"We are saddened by the news of the passing of our great friend Peter Secchia," the park tweeted. "Peter generously sponsored the annual Secchia Garden Lecture Series and has been a long-time supporter of Frederik Meijer Gardens & Sculpture Park."

"Today we remember the life and contributions made by our friend, Ambassador Peter Secchia. He was a passionate advocate for Grand Rapids and Kent County. We are thankful for his contributions toward education, medical research, culinary arts, parks, sports and much more. Our thoughts are with his wife Joan, the Secchia family and loved ones."

“For decades Ambassador Peter Secchia has been a powerful supporter of the Michigan Republican Party, Republican candidates and our causes. It is so appropriate that his name is on our building because he epitomizes the kind of strength and fight that everyone in our Party should have for the causes they believe in. His generosity and philanthropy extend beyond politics which is clear when you look around at all of the wonderful work he did for organizations and efforts across the State and his enthusiasm for those efforts was unmatched.

On behalf of Republicans across Michigan, I would like to send our thoughts and prayers to Ambassador Secchia’s family and friends during this time of loss.”

"Deeply saddened to hear of Ambassador Peter Secchia’s passing. Peter was a tireless champion for West Michigan, and the driving force behind Grand Rapids’ redevelopment, especially the Van Andel Arena. My deepest condolences to Joan and the entire Secchia family for their loss," Meijer tweeted Wednesday. "Among Peter’s many titles: Marine, entrepreneur, diplomat, philanthropist. An incredible life he lived, the last of a trailblazing generation of West Michigan community leaders that worked tirelessly to make this community a wonderful place to live. We owe a debt of gratitude."

“Ambassador Secchia spent his life in service to others. His leadership, impact and influence made Michigan and our world more free. His is a legacy of broader and enduring liberty, and an example of selfless service worth following. We will be sure to keep his family and friends in our thoughts and prayers during this difficult time.”

"Peter Secchia loved his family, his country, and his community. From his time in the Marine Corps to being our nation’s Ambassador to Italy, Peter served our country with distinction.

Here in West Michigan, his impact has been enormous. Peter turned a small business into a successful company, played a critical role in securing Michigan State’s Medical School in Grand Rapids, and led the effort to restore and renew the natural beauty of West Michigan through the creation of Millennium Park and the Kent County Parks Foundation.

Through it all, Peter will be remembered not only for his giving but his ability to encourage and help others give back to our community. His philanthropic endeavors and those he inspired have made West Michigan a better place to live, work, and raise a family. I will miss his “smiley face” notes and memos as well as the occasional I’m not happy “frowny face.“ One thing is for sure, you always knew where you stood with Peter Secchia.

Natalie and I join the countless number of people who hold Joan and the entire Secchia family in our prayers. May you have peace knowing Peter lived a life that made West Michigan an even greater place to call home."

"For decades, Peter Secchia was a leader in business, government, and caring about people. His endeavors have made a positive difference for the people of Michigan and he will be missed by all those who knew him,” said Congressman John Moolenaar. “I first met Peter in 1986. He had a larger-than-life personality and he was all-in with everything he did. Today, my prayers are with his wife Joan, his family, and his friends here in Michigan and around the world."

"The West Michigan Policy Forum is deeply saddened to hear of the passing of Peter Secchia today. Peter was a key founding member and first co-chair of the WMPF conference over a decade ago. Peter's vision, energy, bold ideas and understanding of policy are at the very core of what we do. Peter inspired and engaged the business community to pay attention to the importance of good public policy - and inimitable ability to discern, focus and prioritize the BIG issues made his impact on this organization immeasurable. Our thoughts and prayers are with Joan and the entire Secchia family."

“Peter is a Grand Valley icon who played a deeply influential role in the growth of the university over the years. His passion for education and the growth of our community has made a tremendous difference in West Michigan and he will be missed."

"With the death of Peter Secchia, the people of Grand Rapids lose an individual whose generosity and commitment to the community will have a lasting impact. An astute business leader, Mr. Secchia served our country as Ambassador to Italy and was fully engaged in the revitalization of downtown Grand Rapids. We offer our prayers and condolences to the Secchia family on the loss of their beloved husband, father and grandfather. May Mr. Secchia now rest in eternal peace."

"Ambassador Secchia left a lasting impact on our nation, community and family and he will be deeply missed. He was a committed public servant throughout his life, including his time as a beloved Ambassador to Italy. In his adopted hometown of Grand Rapids, he led countless efforts to improve and grow our community by supporting local investment, education, arts and parks. But beyond his public acts, and his strong leadership, our family is most thankful for his warm and loving heart, and his and Joan’s deep and enduring friendship with our parents and grandparents, Rich and Helen DeVos. He always found a way to share a joke or local insights to keep them smiling, which we all especially appreciated when Rich was waiting for his heart transplant in London. Our thoughts and prayers are with Joan and the Secchia family during this time."

"West Michigan owes much of its rich culture to Peter Secchia, whose generous heart and hands helped transform our area into a dynamic stronghold for healthcare, sports, music, the arts, education and more.

His reach and influence will live on forever, and he leaves a legacy of giving that can be traced, not only to the establishment of widespread initiatives like Millennium Park, but to parks and playgrounds and other subtle needs for which he wrote checks and shunned publicity.

Our family joins untold others in mourning his passing and extends to his beloved wife Joan and their four children prayers that will lift him up and help them find peace as they take solace in knowing that he was indeed loved." 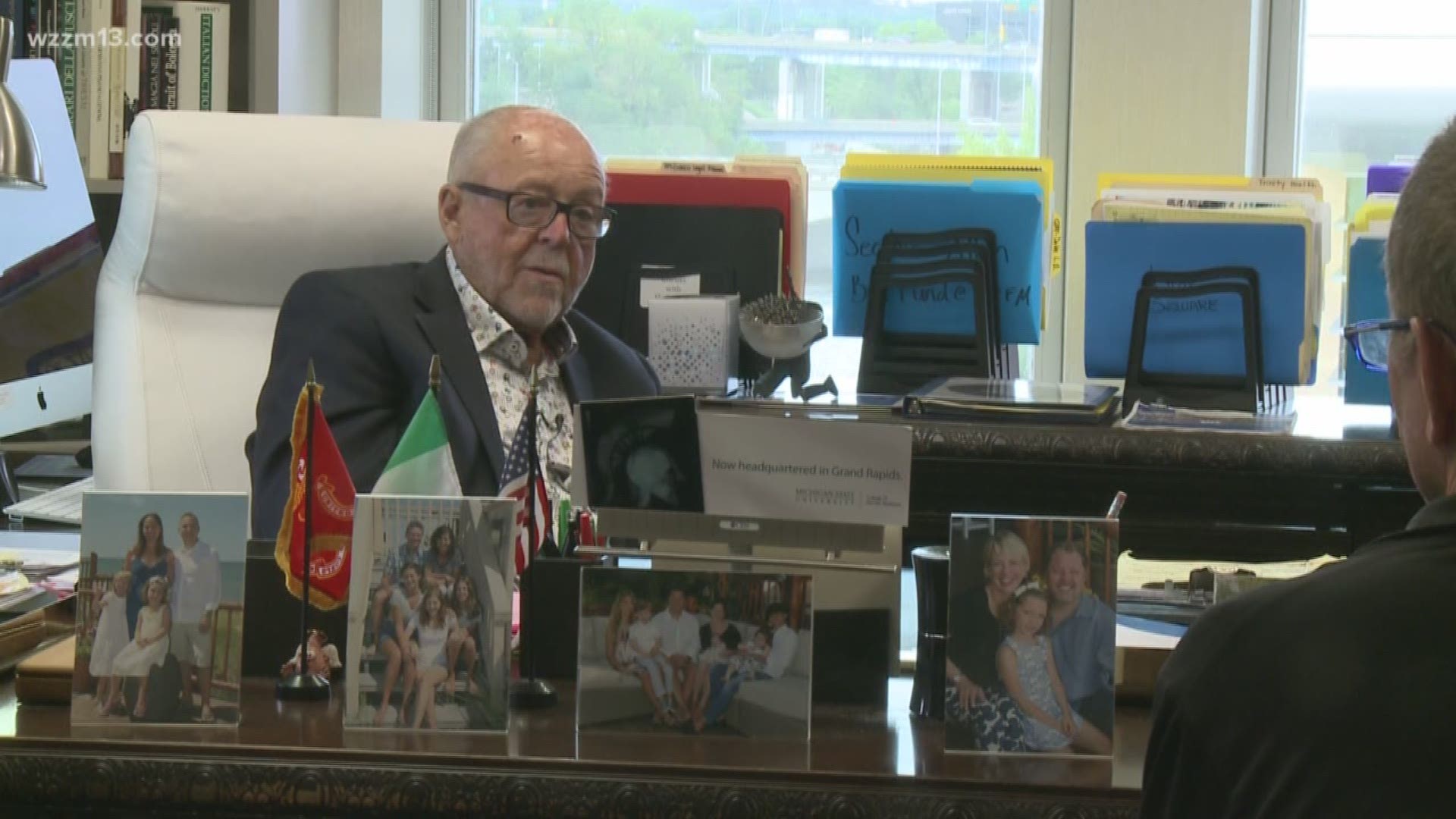