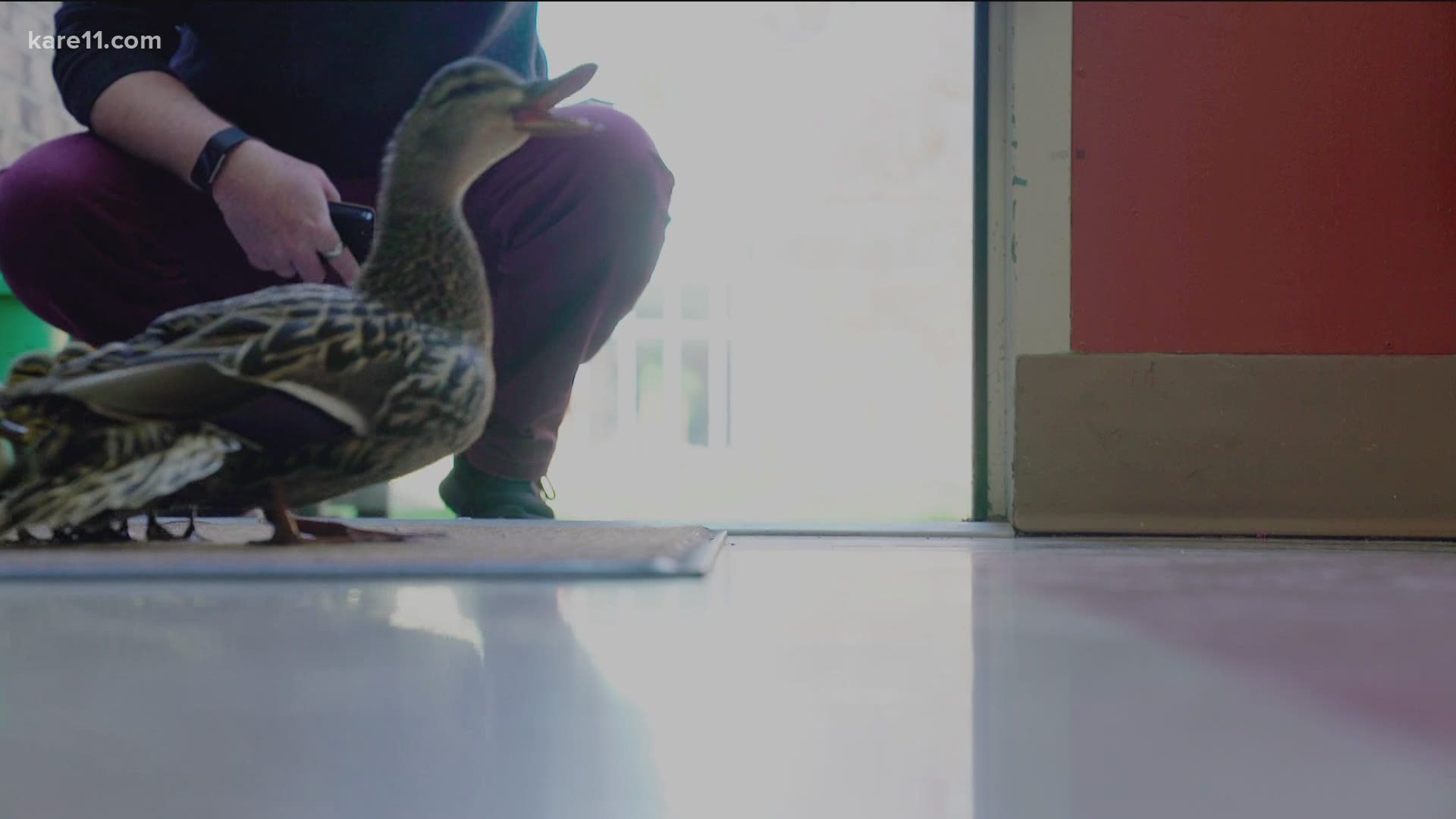 HOPKINS, Minn. — Eisenhower Elementary has a long tradition of transitioning young ones to fly on their own.

Recently, a momma duck and her 10 ducklings continued a long-running tradition when they paraded down an Eisenhower hallway, out an exterior door, and into a pond behind the school.

Sixth graders stood pin-drop quiet on either side of the hallway as the ducks passed between them.  “They’re so cute,” one of them whispered as the ducks went by.

The tradition was born two decades ago, when a mallard flew into the school’s enclosed courtyard to lay her eggs, but then had no way get her flightless ducklings back out.

With the babies literally sitting ducks in the courtyard to hawks and other flying predators, something had to be done.

That’s when someone opened the courtyard door, allowing the mother duck to march her ducklings through the school.  The spring ritual has been taking place ever since, one generation of ducks to the next.

“It’s kind of bittersweet because we love watching them grow up, but this is where they belong,” Johnson said as the ducklings waddled away behind their mom toward the pond.

If Johnson is a sort of auntie to the ducks, then Eisenhower’s library media specialist Jeff Shepherd is the doting uncle.

Shepherd’s workspace provides him a direct view of the courtyard. “And as soon as they’re born, ‘I’m like okay, everyone stay away, everyone be careful, everyone look out.’”

Credit: Chad Nelson, KARE
A mother duck and her 10 ducklings in the courtyard at Eisenhower Elementary in Hopkins, MN

This spring, the in-school migration is the subject of a new children’s book celebrating the ducks’ annual hallway passage. The book was written and illustrated by Eisenhower school parents Brad and Laurie Gilmore.

“There’s really a metaphor for what the school is doing to prepare the kids for where they’re going next,” Brad Gilmore says. “Middle school from here.”

Credit: Chad Nelson, KARE
Brad and Laura Gilmore read from their children's book, Duck in a Row Here We Go!

The Gilmores, parents of an Eisenhower sixth grader, plan to donate proceeds from the book to pay for upkeep and improvements in the courtyard.

Johnson and Shepherd gave each other hug as the ducks cleared the schoolyard and swam out of view on the pond.

“We did it,” Johnson said. “Another family.”