"I don't know which is going to be harder, driving by everyday and seeing the old girl rot or tearing it down." - Linda Wolbers 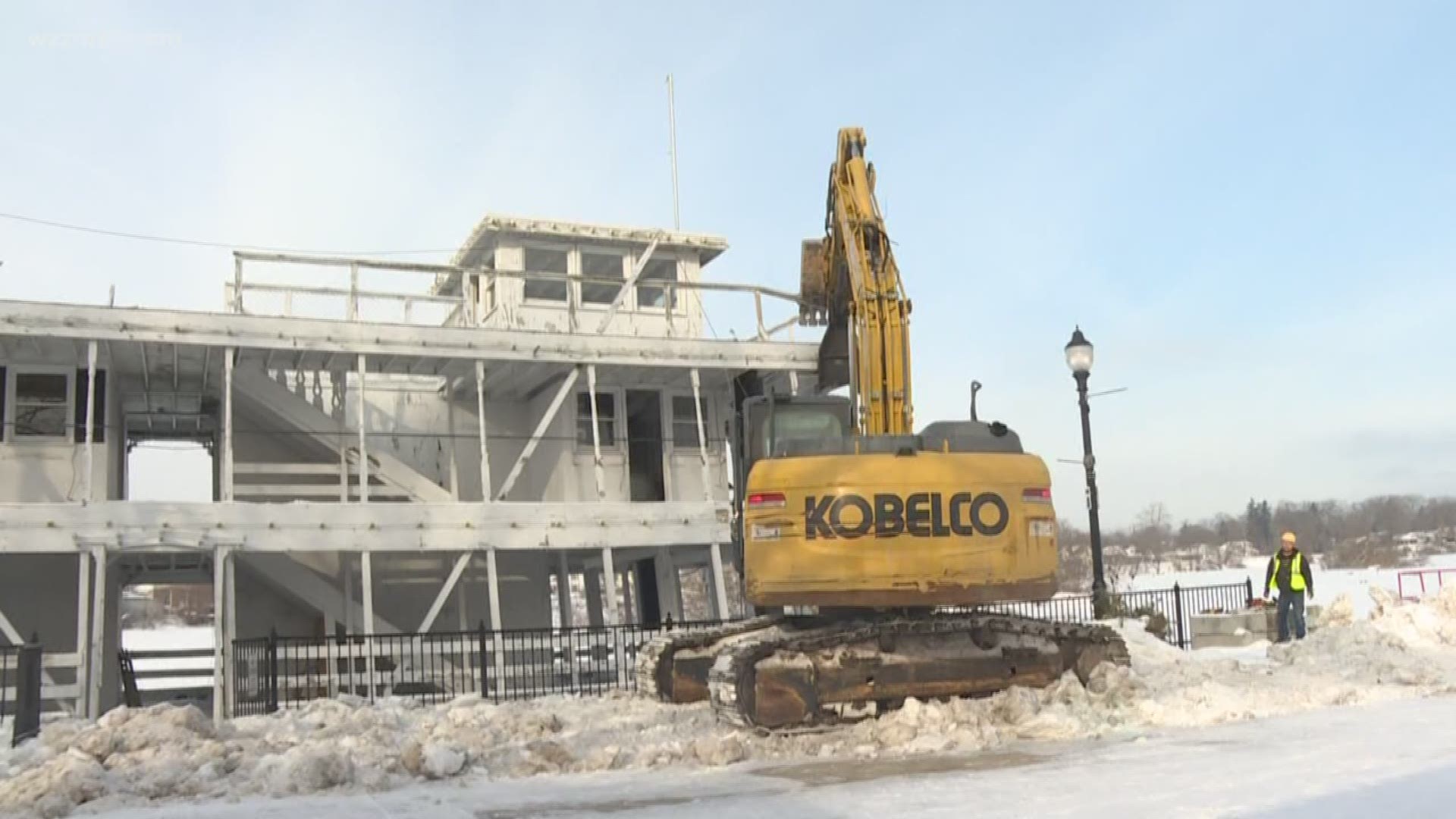 LOWELL, Michigan — For the first time in 40 years, Showboat City doesn't have a Showboat. The iconic Lowell Showboat, that has rested alongside Riverwalk Plaza in downtown Lowell, was demolished Thursday, making way for city officials to build a new one.

"We knew this day was going to come," said Liz Baker, executive director of the Lowell Area Chamber of Commerce. "It's just hard when the day finally does arrive."

Heavy equipment began arriving at the location where the Showboat was docked around 8 o'clock Thursday morning. That's also when gawkers started to gather along the riverwalk.

"We're here for sentimental reasons," said Linda Wolbers, who sat in a car watching with her husband Gordon. "Our sister-in-law performed in the choir and danced on the Showboat with Pearl Bailey."

Terri McCready made it down to the Showboat right before demolition started. She had her camera in hand and snapped off as many images of the iconic boat as she could.

There have been five different versions of the Lowell Showboat since 1932. The one that was demolished Thursday was designed and built by Ivan Blough in 1979 after a strong storm destroyed the previous one.

One of the men who helped Blough build the Showboat 40 years ago wasn't going to miss the opportunity to say goodbye to it Thursday morning.

"We had fun building it, though."

Demolition began around 9:30 Thursday morning. Crews from Earthworm Dozing and Excavating tore down and removed everything above the main deck.

"In the spring, the main deck and pontoons will be moved to the boat launch and then completely removed from the river," added Baker.

City leaders say the preparations to do away with the current version of the Showboat began two years ago.

"Plans are underway for a new one," said Baker. "The new Showboat won't float or travel down the river like its predecessors did, but it will be used for weddings, parties and corporate events."

City officials haven't revealed when construction on the new Showboat will be finished and ready for patrons to visit.

The Lowell Rotary will be holding an auction in April for the public to place bids on remnants collected from Thursday's demolition. For more information on the auction, you're asked to call the Lowell Area Chamber of Commerce: (616) 897-9161.