Breaking the signed 'oath-of-secrecy,' even to talk among themselves, was considered treason, punishable by prison. 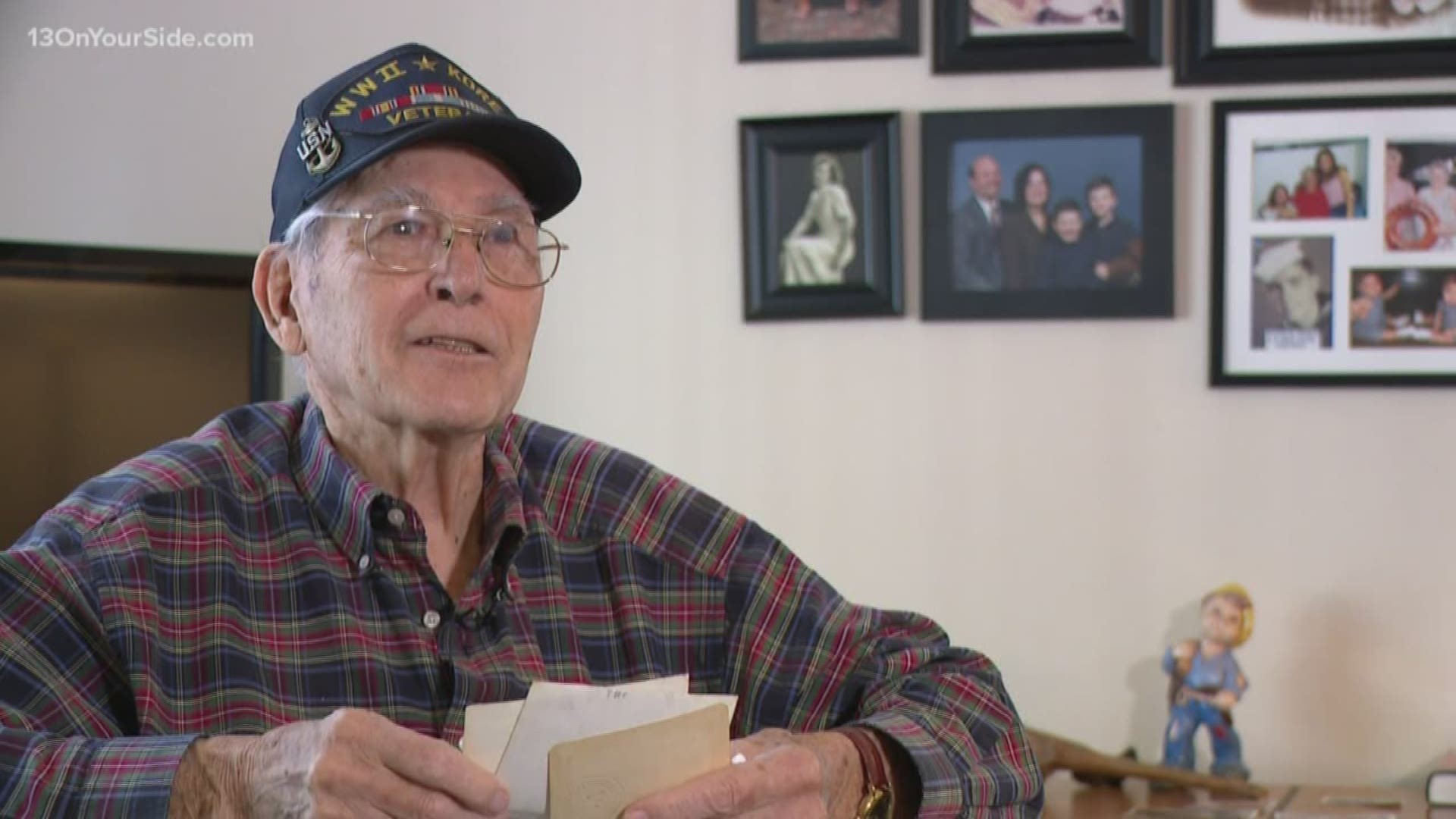 MUSKEGON, Mich. — Between the years of 1946 and 1962, the United States conducted approximately 200 atmospheric nuclear tests.

Most of them happened in the South Pacific, Nevada and New Mexico.

More than 400,000 servicemen in the U.S. Army, Navy and Marines were recruited by the American government, without their consent, to participate in what were the first peacetime atomic bomb blasts in history.

As the Cold War heightened, the purpose of the tests was to investigate the effect of nuclear weapons on warships and on the soldiers who were purposely positioned close to the blasts, exposing them to deadly doses of ionizing radiation poisoning.

After the tests, every soldier was forced to sign an "oath-of-secrecy" about their involvement. Breaking the oath, even talking among themselves, was considered to be treason by the government, punishable by a $10,000 fine and 10 or more years in prison.

For decades, the servicemen kept their burdens from their families and doctors. They were haunted by nightmares and PTSD from their experiences. As time wore on, they began suffering from various health afflictions, including multiple forms of cancer, which many of them believed were a direct result of their exposure to radiation.

These service members are known as Atomic Veterans.

And there aren't many of them left.

Muskegon natives Tom Stafford and Lenz Temple are believed to be two of only 40 Atomic Veterans left in Michigan.

They want to share every detail of their terrifying and haunting experiences before it is too late.

Stafford was among hundreds of thousands of sailors who took part in the above-ground atomic bomb tests. In July 1946, "Operation Crossroads" got underway. It was a pair of nuclear weapon tests conducted by the United States at Bikini Atoll in the South Pacific.

The blasts were 24 days apart and Stafford was forced to stay for both. He was assigned to the battleship U.S.S. Nevada which was the chief target vessel for the first test.

The first bomb was called "Able."

"They dropped it from a plane," recalled Stafford.

The 23-kiloton Able bomb missed the aim point by 710 yards, causing less-than-expected damage to all the battleships that were close to it.

Had the bomb exploded over the Nevada as planned, at least nine ships, including two battleships and an aircraft carrier, would likely have sunk.

Stafford, along with hundreds of other sailors, likely would have died.

"A few weeks later the second bomb happened," said Stafford. "That one detonated underneath the water."

"Baker" was the name of the second nuclear blast which came on July 25, 1946. It was detonated 90 feet under water. The huge nuclear fireball rose up, creating a radiation-filled waterfall that cascaded over all the ships.

Ten ships sunk during the blast.

The biggest difference between the two blasts was the radioactive contamination caused by Baker. Nine surviving Baker target ships were eventually decontaminated while the rest were sunk at sea.

"We were all still on the ship after the second one happened," said Stafford. "I remember somebody with their face and hands covered saying to us, 'Stop, stop, stop; get off; it's too hot [from the radiation].'

"We were told to take all our clothes off and to throw them over the side, then take an oatmeal bath. I ended up covered in red spots all over my body. Five doctors came and looked and just told me, 'It'll go away.'"

While all of his superiors were wearing bodysuits and goggles, Stafford says he was given no protection during either bomb blast.

He was told to take his arm and cover his eyes.

In the year 2000, 54 years after the Bikini Atoll blasts, Stafford was diagnosed with prostate and colon cancer.

"For sure, colon cancer is definitely at an increased risk with exposure to radiation," said Dr. Kevin Stone, a urologist at West Shore Urology in Muskegon, who is familiar with Stafford's case. "He's done quite well despite having a real aggressive tumor."

When asked if he believed that he got radiation poisoning during the nuclear weapons testing, Stafford said, "Yes."

When asked if he still feels like the U.S. government let him down by not getting his consent to participate in the nuclear testing, Stafford again replied, "Yes."

Operation Crossroads was just the beginning of nuclear bomb testing. In 1953, another above-ground test was conducted in Yucca Flats, Nevada, called, "Operation Upshot-Knothole."

Lenz Temple, who was a member of the U.S. Army's 61st Engineer Combat Battalion, was recruited to participate in the test.

Credit: Richard Mullally
Lenz Temple was a member of the U.S. Army 61st Battalion of Engineers in 1953 when he was present for the nuclear test at Yucca Flats, Nevada.

"They said, 'You, you and you," recalled Lenz, 87, about how he was approached by his superiors.

On April 25, 1953, Temple, along with 5,821 other soldiers, participated in the "Simon" test, which had a maximum yield of 43 kilotons. They were told to go get into a trench about a thousand yards away from where the bomb would detonate.

"I didn't think I'd be that close," said Temple. "We were out there with a bunch of sheep, goats, pigs, horses and cows.

Temple recalls getting on his hands and knees in the trench and hearing the countdown before the nuclear weapon was detonated.

"When the bomb went off, there was a blast that went over us that almost sucked us right out of the trench," said Temple. "It was so damn hot, it felt like my head was shrinking.

"I looked and saw this ball of fire just rolling. It looked like an orchid going up.

"There was an announcement that said everything was okay and that we could start walking toward ground zero," said Temple. "The fireball was still going up!"

As he walked toward the blast point, Temple says he saw a bunch of dead animals.

"The sheep looked like somebody drew a line down them," recalled Temple. "One side was brown and the other side was white and one of their eyeballs was white."

Temple remembers several of his commanding officers saying that they viewed the blasts from ten miles back.

"We were told to be up close because we were guinea pigs," Temple said. "We were expendable human beings."

In the early 2000s, health issues started to emerge. Like Stafford, Temple was diagnosed with two different forms of cancer—thyroid and colon.

"I had my colon out [in 2004]," said Temple. "Just before that I had my thyroid out. I had a lump in my neck the size of a chicken egg. I went to the doctor and he said, 'That's your thyroid; you must've had your tonsils out with radiation. That's the only way that would affect that thyroid.' I said, 'No.' Then he said, 'Well, you had radiation from something.' I said, 'I was at the nuclear bomb tests,' and he said, 'Oh s--t!'"

Decades after the nuclear tests ended, the United States government continued to refuse to admit that anybody was harmed by the radiation, even though many of the servicemen who were there died from or contracted and were suffering from radiation-related diseases.

Atomic Veterans were consistently denied government compensation until 1990, nearly three decades after the nuclear tests concluded. That's when the United States Department of Justice formed a different compensation program established by the Radiation Exposure Act, which was passed by Congress and signed into law by President George H.W. Bush.

Four years later, President Bill Clinton launched an advisory committee to investigate the government's role in radiation experiments on U.S. servicemen. The committee would conclude, "Government officials and investigators are blameworthy for not having had policies and practices in place to protect the rights and interests of human subjects who were used in research from which the subjects could not possibly derive direct medical benefit."

After the report was released, Clinton formally apologized to the victims of the human radiation experiments and to their families. In his speech, Clinton stated:

"Those who led the government when these decisions were made are no longer here to take responsibility for what they did. They're not here to apologize to the survivors, the family members or their communities whose lives were darkened by the shadow of these choices. So today, on behalf of another generation of American leaders and another generation of American citizens, the United States of America offers a sincere apology to those of our citizens who were subjected to these experiments. When the government does wrong, we have a moral responsibility to admit it."

On what was their most triumphant day in decades, the Atomic Veterans once again became an afterthought. Within two hours after Clinton's public apology, a Los Angeles jury returned a "not guilty" verdict in the O.J. Simpson murder trial, overtaking that day's news cycle.

In 1996, Congress repealed the Nuclear Radiation Secrecy Agreements Act, allowing Atomic Veterans to finally talk about their experiences without fear of fines or treason charges.

Not much has been done for the surviving Atomic Veterans since.

More than 50 years after the nuclear tests, and more than 20 years since the government declassified the programs, admitting fault, the struggle to raise awareness and meaningful recognition for the Atomic Veterans remains.

Lawmakers approved the participation certificate for these servicemen as part of the 2019 National Defense Authorization Act, but it wasn't until nine months later that these veterans learned how to apply for the certificate.

In May 2017, a piece of legislation was filed by U.S. Representative James P. McGovern (D-Mass.) seeking medals of honor for the Atomic Veterans, and a few congressmen have written President Donald Trump to urge his support, but there hasn't been any response or movement from either front.

Credit: WZZM
Lenz Temple (left) and Tom Stafford (right) were both present, without consent, at the U.S. government's nuclear bomb testing between 1946-1953.

For Tom Stafford and Lenz Temple, receiving a simple piece of paper from their government isn't enough, especially considering the health problems both men have dealt with over the past twenty years.

"I'm not holding my breath," said Temple, when asked about any future honors that might finally be bestowed on the Atomic Veterans. "We were forgotten about for 50 years, so at this point, I expect that trend to continue."

If you'd like to learn more about Atomic Veterans and the compensation benefits they qualify for, click HERE.

If you know of a story that should be featured on "Our Michigan Life," please send a detailed email to 13 ON YOUR SIDE's Brent Ashcroft at life@13onyourside.com.