Eight-year-old Tryson Smallegan may have lost his eyesight but that didn't mean he had to lose his focus. 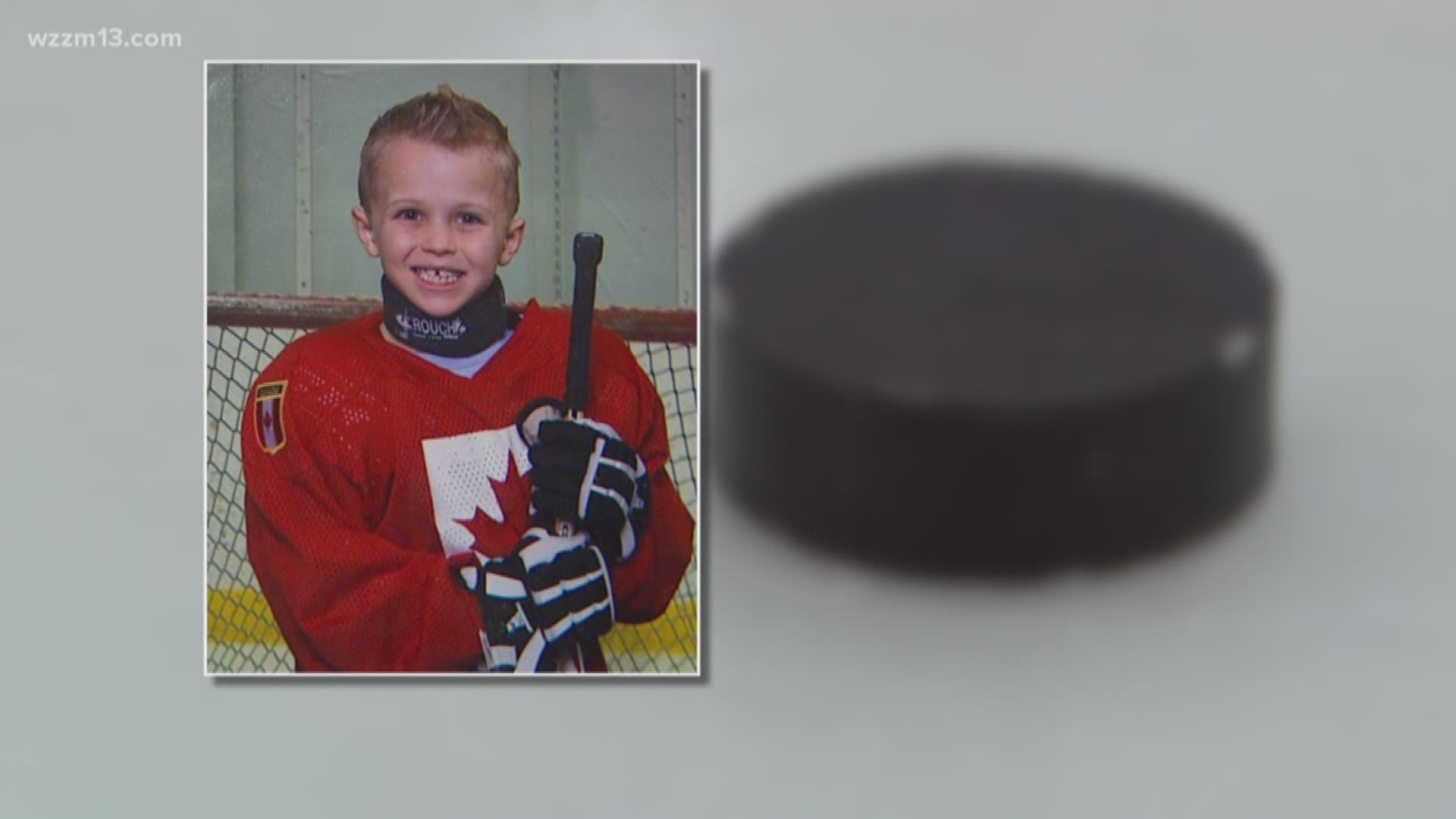 It seemed like everything was fine, and the family no longer needed to worry, then suddenly, everything went blurry then dark.

Eight-year-old Tryson Smallegan may have lost his eyesight but that didn't mean he had to lose his focus, too.

"It all started for him soon after he was born," said Hannah Smallegan, Tryson's mother. "He had four surgeries before he was 6 months old."

Tryson was born with an arachnoid cyst on his brain. He underwent a craniotomy and had a shunt implanted to help drain the pressure in his brain.

This is a scan that was taken of Tryson Smallegan's brain. Tryson underwent 11 separate surgeries in 2017 to help alleviate the pressure the Arachnoid Cyst was placing in his optic nerves. His vision could not be saved.

"After he was 6-months-old, [the shunt] was working, and we only went to the hospital every two years for MRIs," said Hannah. "The doctors said everything was looking good."

So, the Smallegans focused on living a normal life.

"A couple of years ago, I took [Tryson] to a Grand Rapids Griffins hockey game," said Mike Smallegan, Tryson's father. "He fell in love with hockey after that."

Tryson Smallegan underwent 11 surgeries in 2017. During his many hospital stays, he enjoyed visits from Griffins players and the team mascot, Griff.

The family would go to several Griffins games, which led Tryson to wanting to start playing the game. In 2016, he joined a team with the Grand Rapids Youth Foundation. He was practicing and playing in games every week.

"He had never been in ice skates before," said Hannah. "He picked it up pretty fast."

"His teacher called me the first day after Christmas break ended and said Tryson kept running into things in class, and that wasn't like him," said Hannah. "We took him to Helen DeVos Children's Hospital, where we found out the shunt wasn't working properly and there was pressure building on his optic nerves."

Tryson underwent a surgical procedure where doctors cut a hole in the cyst. They were hoping that the cyst would then drain itself, but within a week, the swelling came back and his eyesight kept getting worse.

"It was tough not knowing how it would effect him long-term," said Mike. "For a while, we were really hoping and praying that this was a temporary thing."

That wasn't the case. It didn't take long for Tryson's vision to be completely gone, and he would be declared legally blind.

"It was so hard watching him suffer," said Hannah.

Tryson didn't only lose his sight, it appeared he would also have to lose the chance to play the game he loved -- hockey.

Or, so he and his parents thought, until they got a phone call in February 2017.

"The Grand Rapids Griffins Youth Foundation called and said we want Tryson to come back and play hockey," said Hannah.

Bradley Lardie volunteers with the Grand Rapids Griffins Youth Foundation. During practice and games, Bradley serves as Tryson's eyes on the ice, helping guide him on the ice so he can still play the game he loves.

Tryson tried to play, but he couldn't see anything, so he just stood on the ice. The hockey season ended in March 2017. Tryson was back on the ice, but could no longer play the game even close to the level he could before.

Once the season ended, Tryson spent the spring and summer of 2017 enduring several more surgeries, hoping to reduce the pressure inside his head.

The pressure would lessen, but his eyesight never improved.

In the fall of 2017, the Grand Rapids Griffins Youth Foundation contacted Hannah and again invited Tryson back to play hockey. GRGYF organizers had discovered a special puck that was being used in blind hockey leagues in Canada.

Marie Sly, who works for USA Hockey, and is the disability director for for the Michigan Amateur Hockey Association, managed to get a blind hockey puck for Tryson to use during practice and games. It's metal and filled with ball bearings.

"Tryson can actively participate now," said Marie Sly, USA Hockey and Michigan representative for Disabled Hockey. "These blind pucks are larger than real hockey pucks; they're made of metal and are loud because they're full of ball bearings inside.

"Blind players don't have to rely on seeing the puck; they just need to listen for it instead."

"I went over to Georgetown Ice Center at the end of October, met Marie Sly and got one of the pucks from her," said Hannah. "We would then bring the puck to Tryson's practices and games."

Not only was Tryson given a special puck to use, he was also introduced to a new friend, who would be his new eyes.

"I tell him which way to go and what to do when he takes his shifts on the ice," said Bradley Lardie, who volunteers with the Grand Rapids Griffins Youth Foundation. "He follows my voice."

During practice, Lardie joins Tryson on the ice and works exclusively with him during all the drills. He tells Tryson where the obstacles are on the ice, and where to avoid.

"When he's following me, he's usually pretty close to me and he's able to see the outline of me," said Lardie. "When he's holding the puck, sometimes I can't hear my voice over the puck, so I tap my stick on the ice to let him hear where we're going."

"Every time Tryson is on the ice, he gets the puck," said Hannah. "Just for him to be able to participate in games again has really been life changing for him.

"The blind puck allows for Tryson to not be any different from the rest of his teammates, and having Bradley out there as his personal guide, helps him keep his competitive edge."

Tryson Smallegan began attending Grand Rapids Griffins hockey games when he was 5-years-old. He fell in love with the game an started playing before he lost his eyesight.

Thanks to the Grand Rapids Griffins Youth Foundation's willingness to think of Tryson and want him to continue playing the game he loves, Marie Sly's friendship and connections to securing the blind hockey puck, and Bradley Lardie's on-ice commitment to be his eyes and help him succeed, Tryson's hockey career will continue, despite losing his vision.

Within the next couple of years, Marie Sly is hoping to bring a blind hockey league to Michigan. She says the first league will likely organize on the east side of the state. If it's successful, Sly hopes to eventually get a league going in Grand Rapids.

As for Tryson, after eleven surgeries in 2017, with his last one happening on Dec. 1, he currently has no more surgeries scheduled. He can focus on playing the remainder of his hockey season, which ends in March 2018.

For more information about USA Hockey, and disabled hockey in Michigan, you're encouraged to check out these websites:

If you know of a story that would make for a great feature on "Our Michigan Life", please send an email to WZZM's Brent Ashcroft at life@wzzm13.com. 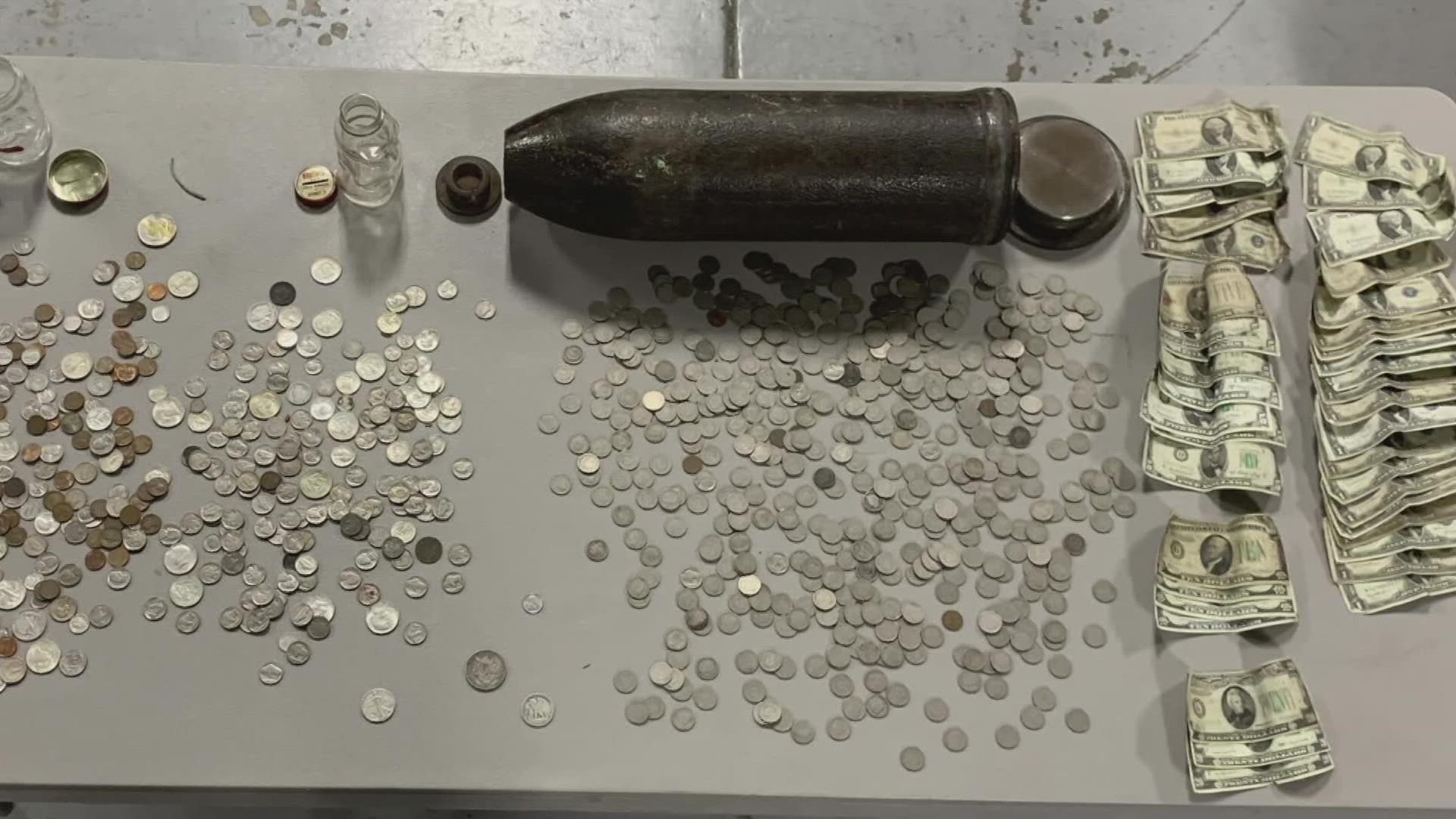 TORPEDO TREASURE: Coins from the 1800s found inside WWI bomb at Michigan home