The parking lot of a West Michigan dialysis center was a make-shift chapel, as a couple pulled together a 'quickie' wedding so the bride's ill father could attend. 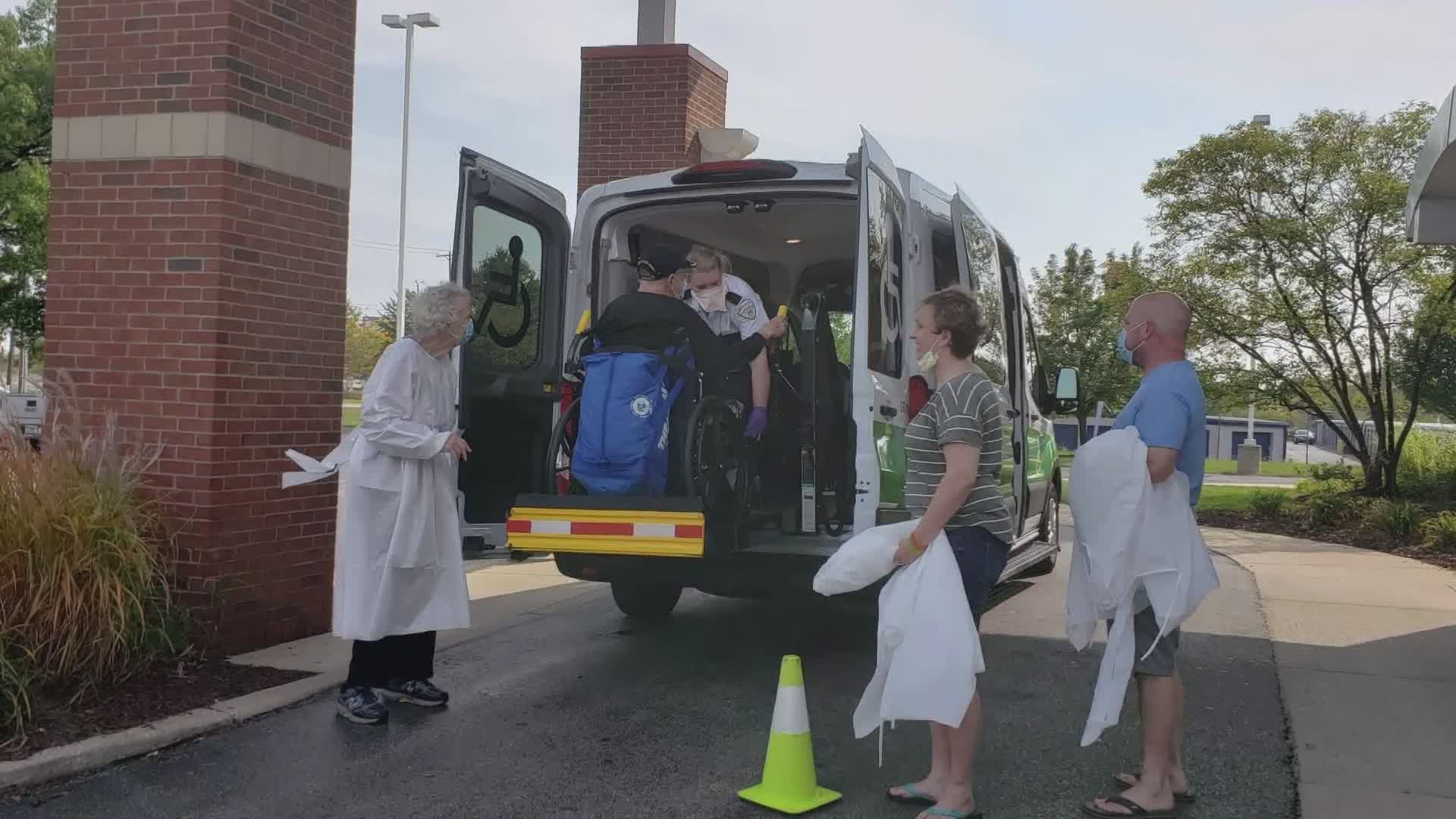 WYOMING, Mich. — The pandemic has forced many couples to alter their 2020 wedding plans, but it wasn't going to slow down a West Coast couple, who flew all the way home to West Michigan so the bride's terminally ill father could give her away.

"[Back in July], my dad had a fall and went into the hospital," said Connie Gee, the bride-to-be. "He fractured a bone in his neck and they also diagnosed him with congestive heart failure.

Ernest Gee was immediately put in Hospice care and was given a month to live.

Connie and her fiancee, Matt Tsuchiya, flew to Grand Rapids as quickly as possible to be with Ernest and so that Matt could ask him for his daughter's hand in marriage.

"We weren't able to see my dad in-person," added Connie. "Because of the pandemic, we could only communicate with him through his window at the Hospice facility."

Ernest gave his blessing to Matt, then quickly said to Connie, "So, who's giving you away?"

It was in that moment that Connie knew that time was of the essence and she wanted to make sure her father was still around and was able to give her away.

"The only time we would be able to catch him would be after he has a dialysis session, which he has three times a week," said Connie. "So, the wedding would have to be at his dialysis treatment center and before the ambulance has to take him back to the nursing home."

Connie contacted her mother and found out her dad was having dialysis at Fresenius Kidney Care in Wyoming on Saturday, Sept. 26 from 10 a.m. to 3 p.m. Connie and Matt flew from Oregon to Michigan a week prior and began the process of planning their wedding.

"We were able to secure an official and the dialysis facility was willing to let my dad out 15 minutes early so he could attend the wedding," added Connie.

Connie, Matt, the official, and a small group of family and friends, arrived at the dialysis center early Saturday afternoon. The plan was to have the wedding at 2:45 p.m. that day because Ernest had to be on the ambulance no later than 3 p.m.

Just before 2:45 p.m., Ernest was wheeled outside and into a small courtyard near the facility's parking lot.

"We actually placed the wedding where his group of dialysis friends could see it from the windows," said Connie. "There was a nice path that we used for a make-shift aisle; I pushed my dad down the aisle in his wheelchair.

"The officiant asked, 'Who gives this woman away today,' and he got to say, 'Yes,' so my dream came true."

Connie and Matt's wedding was done before the ambulance left without Ernest.

"Any little hiccup in this plan and it wouldn't have gone through how it should have," said Connie. "It was just the perfect scenario."

"Having Ernest in attendance kind of put a tone to the moment," added Matt. "The wedding would have been incomplete without him there."

Once the nuptials concluded, Ernest was quickly loaded into the waiting ambulance and transported back to Hospice care. He never got to speak to the newlyweds, but he did call them the next day.

Credit: Connie Gee
Connie Gee made her dream come true by arranging her wedding day so that her terminally ill father would give her away.

"He asked us, 'Was I dreaming or did you get married,'" said Connie. "The wedding wasn't traditional, but family is important and he got to be there, so I wouldn't change anything about it."