"It's not what's underground, but what used to be above ground that's important." - James Schmiechen 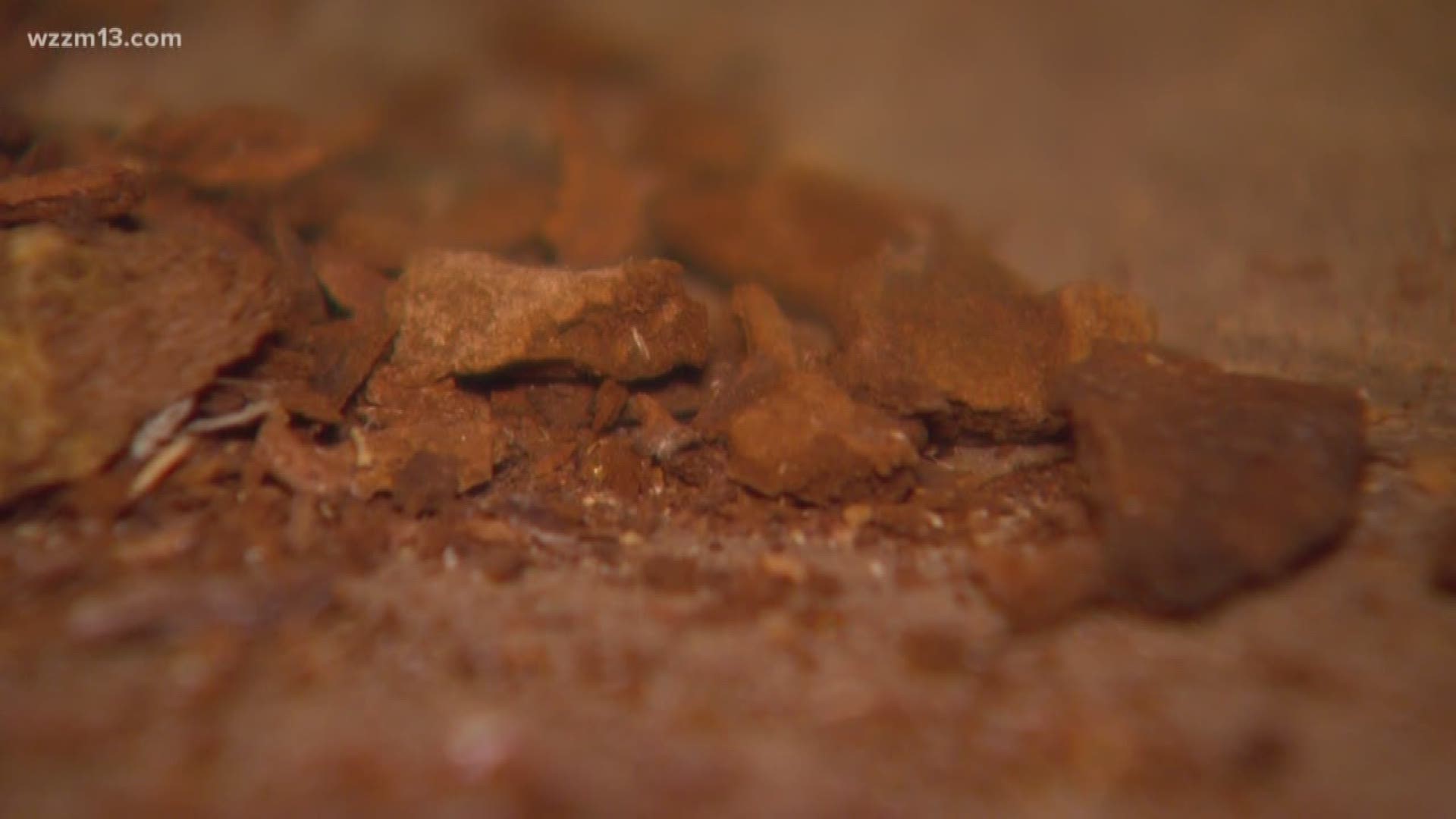 SAUGATUCK, Mich. — The site where the famous lumbering and shipbuilding village of Singapore, Mich., once stood still holds enormous significance for the history of Michigan and the Great Lakes.

Nearly two centuries later, a few of the structures still remain from a town that was buried beneath the dunes.

The structures can be seen today, but you need to know where to look.

To truly know all there is to know about Singapore, Mich., one must start at the beginning. In 1831, a man by the name of Oshea Wilder, a pioneer from Massachusetts, traveled west and visited the Kalamazoo River valley, accompanied by two fellow investors. Wilder decided to acquire the land, then returned in the spring of 1832 with his wife and six children, prepared to start a new settlement.

In 1837, Wilder's dream had come true. Singapore had become established and people started moving there.

Credit: Kit Lane
This is the remnants of Singapore, Mi. Photo was taken around 1880 after the settlement had been deserted and the sand began swallowing the village.

"It quickly became a famous lumbering and shipbuilding boom town," said James Schmiechen, chairperson of the Saugatuck-Douglas Historical Museum and Singapore historian. "Singapore was platted with streets; there were four lumber mills, a bank and between 25 and 40 houses.

"The bank actually printed it's own money."

Credit: Saugatuck-Douglas Historical Society
Once the settlement of Singapore was established, the bank printed its own currency. Some of the original Singapore money still exists today.

An official census was never kept for Singapore, but historical accounts say approximately 200 people lived there.

"Schooners and barges were built in Singapore," said Schmiechen. "It was the central center of commerce for this part of Michigan for 20 years.

"Singapore started to rival Milwaukee and Chicago as a primary shipping and lumber port on the Great Lakes."

Singapore flourished for nearly a half-century, but its time of prosperity came at a price.

In 1871, The Great Chicago Fire broke out, and Singapore was called upon to help rebuild the city.

"Some of the last good timber at that time was the timber that existed in a forest ring that was between Singapore and Lake Michigan," said Schmiechen. "Singapore was a village protected by woods, and all of those trees were clear-cut so the timber could be shipped across the lake to Chicago."

As the trees came down, Singapore was no longer being protected from the prevailing west wind off the lake.

The result was catastrophic and Singapore would succumb to, "a form of environmental suicide," said Schmiechen.

Over the course of the next several decades, as the sand kept piling up, all the settlers left Singapore deserted and relocated.

The mills, buildings and homes in Singapore would become dismantled then ultimately buried by the sand.

1 / 3
Kit Lane
Soon after the settlers of Singapore cut down all of the trees that protected the village, the prevailing west winds off Lake Michigan blew the sand and ultimately buried everything. Singapore became Michigan's version of Pompeii.

"By the early 1900s, people could still see parts of house roofs sticking up [through the sand]," said Schmiechen. "By the early 1920s, Singapore became Michigan's version of Pompeii - a buried city under a couple of sand dunes."

In the century-and-a-half since Singapore's demise, proof that the story was real and not a myth continued to be unearthed.

1 / 3
WZZM
In the century-and-a-half since the demise of Singapore, people have been unearthing several artifacts from the site, including pottery, silverware, machine pieces, tools and toys.

"People would discover building materials, tools, household goods and pottery," said Schmiechen. "As time went on, people also discovered old Dugout Road, which was the main road the settlers used to travel to and from Singapore."

1 / 2
WZZM
Back in the mid to late 1800s, Dugout Rd. was the only way in and out of Singapore. Dugout Rd. still exists today, though it's not much more than an overgrown trail. You can certainly see the footprint of a once busy artery used by settlers.

All these years later, Dugout Road has become an over grown trail, but the footprint of a once bustling artery for traffic (likely horse-drawn carriages) still exists.

Four buildings were spared from Singapore and moved to Saugatuck before the sand buried them.

"The bank and three houses were slid down the frozen Kalamazoo River on logs in the winter," said Schmiechen. "The bank and two of the houses still exist."

Credit: WZZM
The Singapore Bank was among four buildings that were spared from the disaster. The bank, along with three houses, were relocated to Saugatuck.

The Singapore Bank was relocated to Butler Street, which is the main drag along Saugatuck's waterfront district. It's been converted into a book store and art gallery.

"Visitors likely go in and out of that old bank building and have no idea the real history behind it," added Schmiechen.

Credit: WZZM
996 Holland St. in Saugatuck was one of the vestiges saved from Singapore. It was placed on large logs and slid up the Kalamazoo River in wintertime.

One of the houses is located at 996 Holland St. in Saugatuck and the other is at 333 Lucy St.

Credit: WZZM
333 Lucy St. in Saugatuck is a home that was saved from Singapore. It was placed by settlers on big logs and slid up the Kalamazoo River to Saugatuck during wintertime.

"I bought this house in 2011," said Maureen Hayes, who owns the home at 333 Lucy St. "The day we pulled in the driveway of closing, the historic commission was here at the house and said, 'Do you realize you have a Singapore house?'"

Hayes says many parts of the house are original and from the 1860 time frame, including piles of wood chips that she has to continue to clean up in her basement.

"This is all from Singapore," Hayes said, while taking a broom stick and poking at her basement ceiling. "The insulation in this house is made from sawdust and wood chips that was created by the settlers of Singapore."

Every few weeks, Hayes has to sweep up shards of Singapore.

Credit: WZZM
When Maureen Hayes walks on her kitchen floor, the ceiling in her basement constantly shakes loose its insulation and is makes a mess.

"Cleaning this gets annoying, but it's kind of neat to know that I have rare Michigan history raining from my ceiling," said Hayes."

Some structures within her home itself, and the wood chunks falling from her ceiling aren't the only remnants of Singapore on her property.

"I've got this big beam in the back yard," said Hayes. "I think it's what the settlers used to drag the house down the river to save it.

"We found the beam under the kitchen floor and decided to use it as a bench in our backyard."

Credit: WZZM
Maureen Hayes strongly believed that these wooden beams were used to slide her home up the frozen Kalamazoo River, during the demise of Singapore.

Hayes knows she's literally living inside a piece of history, and with that comes the responsibility of preserving that history.

"Retaining the character of this house is a priority for me," said Hayes. "I love this house and I'm so glad it didn't get buried by sand."

For many American and Great Lakes historians, as far as legendary stories go, few are as fascinating as Singapore.

"It was always Singapore that was the point at which West Michigan history began," said Schmiechen. "It was a story about lumber, ships and people."

If you know of a story that should be featured on "Our Michigan Life," send a detailed email to Brent Ashcroft: life@13OnYourSide.com.