DJ DILL PICKLE: 12-year-old is one 'cool cucumber' across the Midwest

MOUNT PLEASANT, Mich. - What's a 12-year-old boy to do during the summer months? Some of the common options are playing with friends, ride bikes and go to the beach.

Oh, since it's 2019, we can't forget endless hours of playing FortNite and watching YouTube videos.

There's a 12-year-old in Mount Pleasant, Mich. who is choosing to spend his summers consumed with something else and it's putting him on the fast track to stardom.

"I love dancing and I love music," said Dylan Hunter, 12, who will be a 7th grader at Mount Pleasant's Sacred Heart Middle School this fall. "When I was like 2 or 3 years old, my mom and dad would play songs for me and I would just dance to them."

As Dylan got older, he acquired a nickname -- one that may stick with him forever.

"Everybody started calling him Pickle," said John Hunter, Dylan's father, who is also his manager. "Dylan was shortened to 'Dill Pickle', like the small cucumber, then his nickname became just Pickle."

DJ Dill Pickle got to meet and learn from Marshmello (Christopher Comstock) who is a, internationally known DJ and producer.
John Hunter

Pickle would spend a lot of time at his dad's nightclub in Mount Pleasant -- Wayside Central -- which is a college hot spot near Central Michigan University that brings in many well-known disc jockeys and artists.

"He was introduced to this world at an early age and it became a passion," said John.

When he turned 10, Pickle was introduced to Josh Orozco, who has been a DJ for over a decade and a talent who John has hired frequently to perform at Wayside Central.

"Pickle and I would hang out when he came to Wayside," said Orozco. "After a while, we started working together and I quickly became his DJ mentor."

Orozco showed Pickle everything, from how to execute the seamless segue to even producing his own content.

"Pickle kind of took the reverse on learning how to DJ," said Orozco. "He learned how to handle himself on stage, mix and set his own cues first, then got into the music making process second."

When Pickle was nine years old, he started opening for acts in front of live crowds at Wayside Central where he was able to meet and learn from nationally-known DJs like Pauly D, Khalid, Quinn XCII and Andre Drummond.

That's about the time when Pickle became known as 'DJ Dill Pickle.'

"This is what I want to do for my career," said Pickle.

In 2017, Pickle would perform at Wayside a lot as well as other festivals and venues around Mt. Pleasant.

It was in the summer of '17 that Pickle truly put himself on the DJ map at the Breakaway Music Festival in Grand Rapids, Mich.

John Hunter coordinates the event, including the booking of all the acts.

"One of the artists canceled at the last minute," said John. "We were back in the production office trying to figure out what we were going to do."

"We came up with the bring idea of letting Dylan go on stage."

An hour later, Pickle had put together a set list, ran up and out on stage and performed in front of 10,000 people.

"It was a surreal moment," said John. "He was just fearless.

"Once he pressed play, the crowd really sucked to the barricade and just had a blast.

When DJ Dill Pickle wrapped up his show at Breakaway Music Festival 2018, he posed for a pic with the crowd of thousands behind him.
John Hunter

From that moment on, DJ Dill Pickle has been getting offers to play shows and festivals around Michigan.

"He outgrew my bar quickly," said John Hunter, Dylan's father. "He was established."

Pickle was then invited to DJ at the Portland Summer Fest in Portland, Mich., and Common Ground Music Festival in Lansing where he started performing alongside some "A-List" acts.

After meeting Pickle, many of these big name DJs started following him on Instagram.

"Quinn XCII and Waka Flocka Flame were the first two DJs to follow me," said Pickle. "After that, I kept getting new followers every day."

Pickle isn't just DJ'ing gigs in Michigan anymore. Events throughout the Midwest have heard of this 12-year-old EDM phenom and have inquired about adding him to their concerts.

"Milwaukee Summerfest contacted us and wanted Pickle to open the show," said John. "What an amazing opportunity that was for him."

The Milwaukee Summerfest is considered the world's largest music festival, drawing tens of thousands of fans. On June 26th, 2019, Pickle took the stage, did his thing, and the crowd went wild. 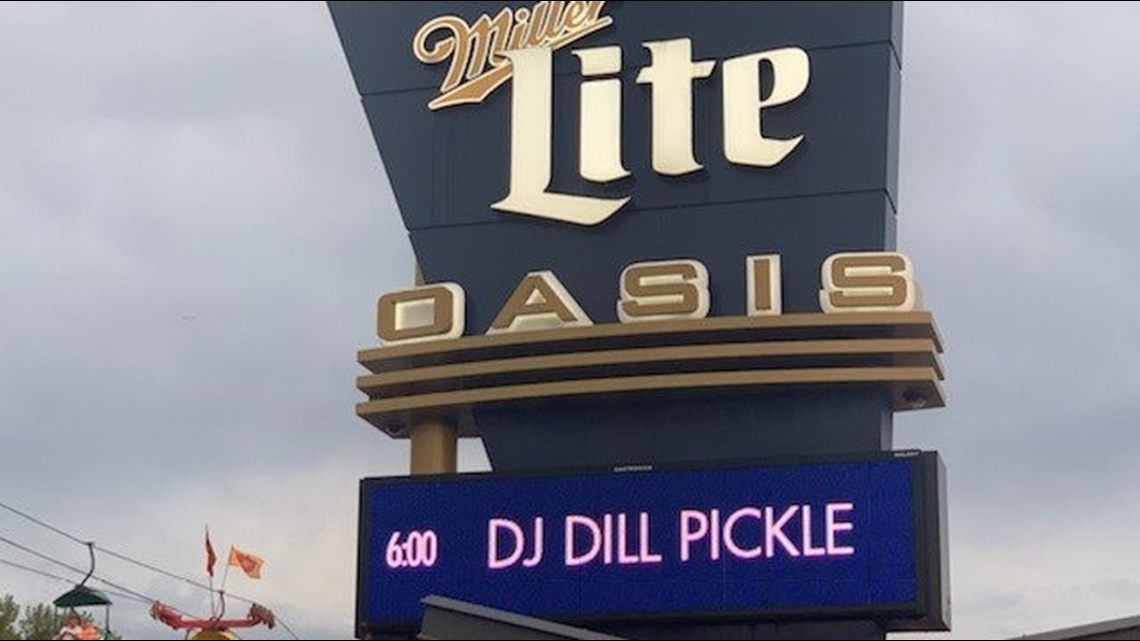 "His future from here is entirely up to him," John said. "I will keep managing him but eventually I will hand the keys over to him.

"You never know what you're going to get at a DJ Dill Pickle show."

Pickle says he can't get enough of it.

DJ Dill Pickle's next appearance is at "Party in the Park 2019" at Fifth Third Ballpark in Comstock Park, Mich. on Thursday, July 18.

Pickle and Josh Orozco have been collaborating on some original music recently. That music can be found on platforms such as Spotify, SoundCloud and Apple Music.

Just search, what else, 'Pickle Juice.'

If you know of something of interest that would make for a great feature on "Our Michigan Life," please send a detailed email to 13 On Your Side's Brent Ashcroft: life@13onyourside.com.