David Trotter has found over 100 Great Lakes shipwrecks in his 40 years of hunting. In June, he discovered and identified the elusive 'Water Witch' steamer. 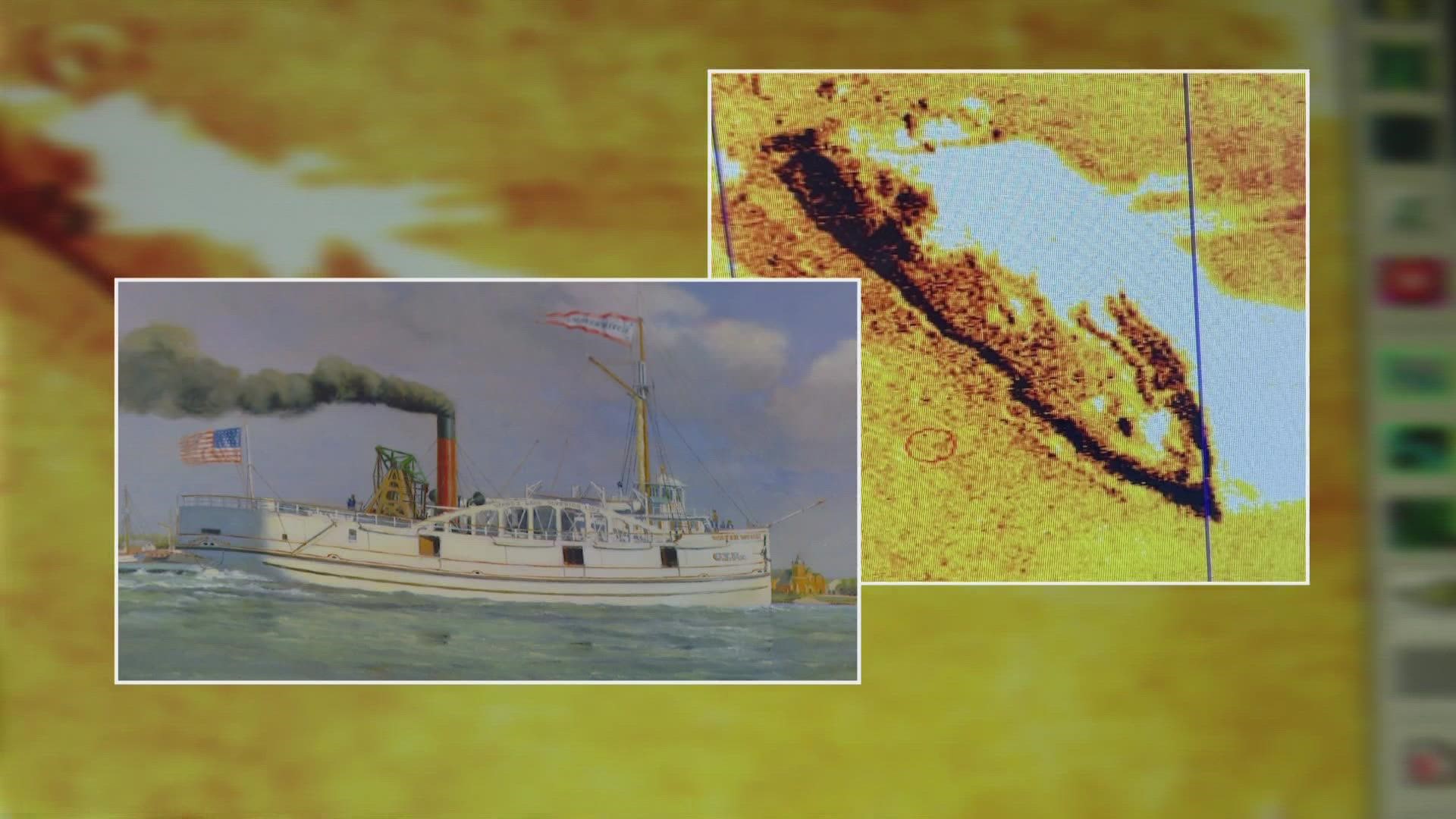 DETROIT, Michigan — On November 11, 1863 - just 17 months before the end of the Civil War - a Great Lakes steamship named 'Water Witch' was braving the perils in Lake Huron's Saginaw Bay during a fierce storm. The ship foundered, sunk, taking all hands 230-feet to the bottom.

Shipwreck hunters have been searching for her final resting place for more than a half-century.

The search ended in June 2021, after one of Michigan's premier shipwreck hunters finally discovered and identified it after over 40 years of searching.

"I've known of the loss of the Water Witch since I started in this game in the 1970s," said David Trotter, 79, a renowned shipwreck hunter from Canton, Mi. who has found more than 100 lost ships while managing Undersea Research Associates. "We got really interested in it when we found the City of Detroit steamer in 1998."

The City of Detroit, which also sank in Saginaw Bay, was the sister ship of the Water Witch.

"I thought, surely, it would be easy to discover the Water Witch because we knew it went down near in the same vicinity on the lake as the City of Detroit, but it took us 23 additional years," Trotter joked.

Trotter and his team have covered and scanned more than 2,500 square miles of Lake Huron's bottomlands. While running side scan sonar, he picked up an image of what certainly looked like a sunken ship. He cross-referenced the coordinates of the site with the state's shipwreck database and realized he had located something undiscovered.

Credit: David Trotter
Screen-capture of the side scan sonar image David Trotter saw, which ultimately ended the mystery of what happened to the Water Witch steamer.

"I was able to get our dive team out to the wreck site in late June," Trotter said. "It was a mixed-gas because it was 230-feet down."

"As we grappled into the shipwreck, divers suited-up then descended," Trotter said. "The visibility was sufficient to allow an overview of the ship as [the divers] settled on it."

The divers spent between 20-30 minutes swimming from one end of the wreck site to the other, documenting it by taking copious amounts of video footage. Once back on land, Trotter and his crew watched the footage, scrutinizing every frame, hoping to see a 'smoking gun' that would lead to a confirmed identification of the wreck. 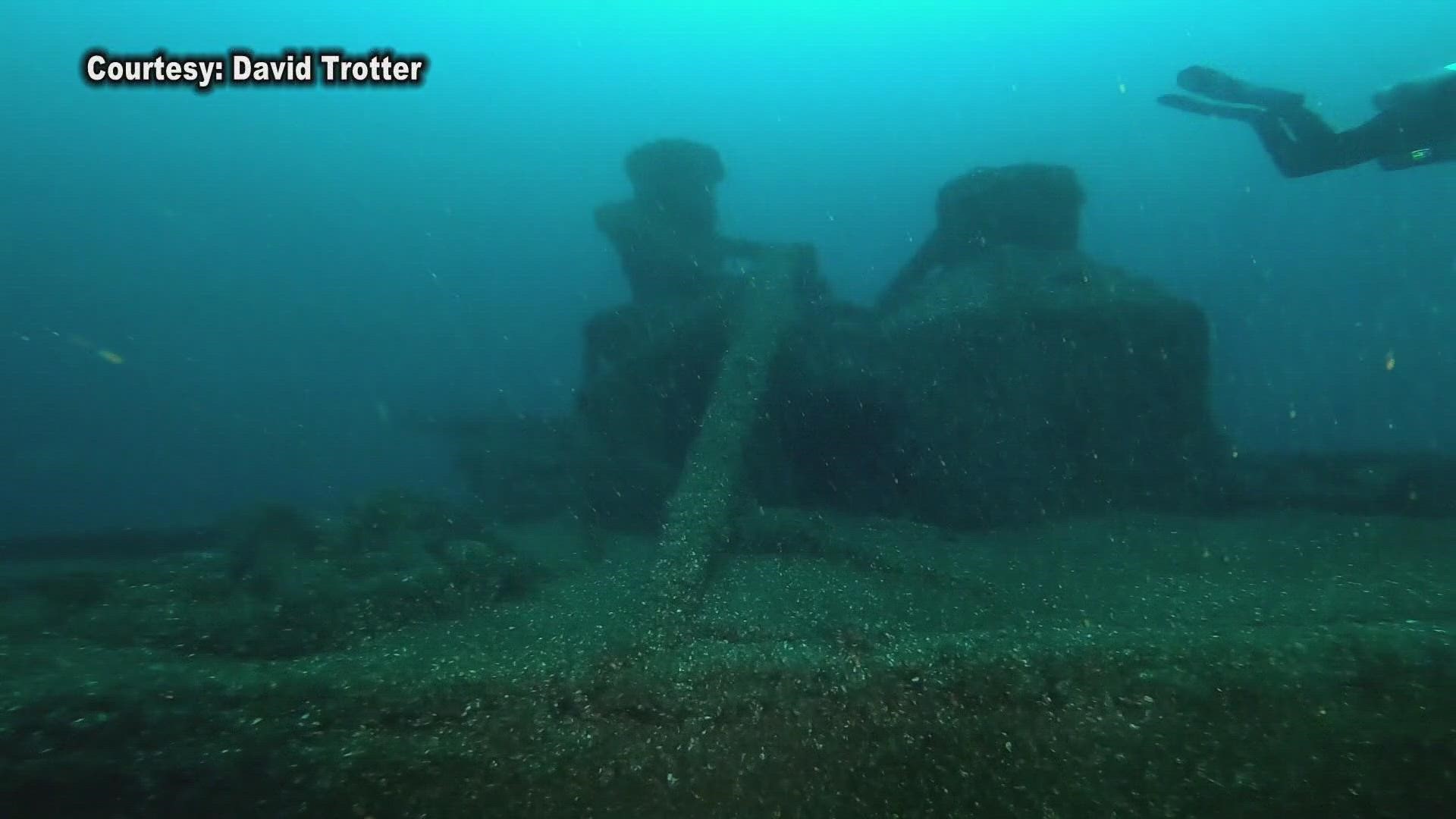 "Swimming down the deck, you come to open cargo hatches that we dropped down into and actually found grain which was another identification about what this vessel was carrying," said Trotter, of his viewing of the video. "As we move out to the front of the bow, we see that both of those wooden stock anchors are still in place, which told us they had no chance to use those in an effort to stave off the tragedy.

"The key to absolutely confirming and verifying what we had found had to do with physically measuring the length of the ship underwater." 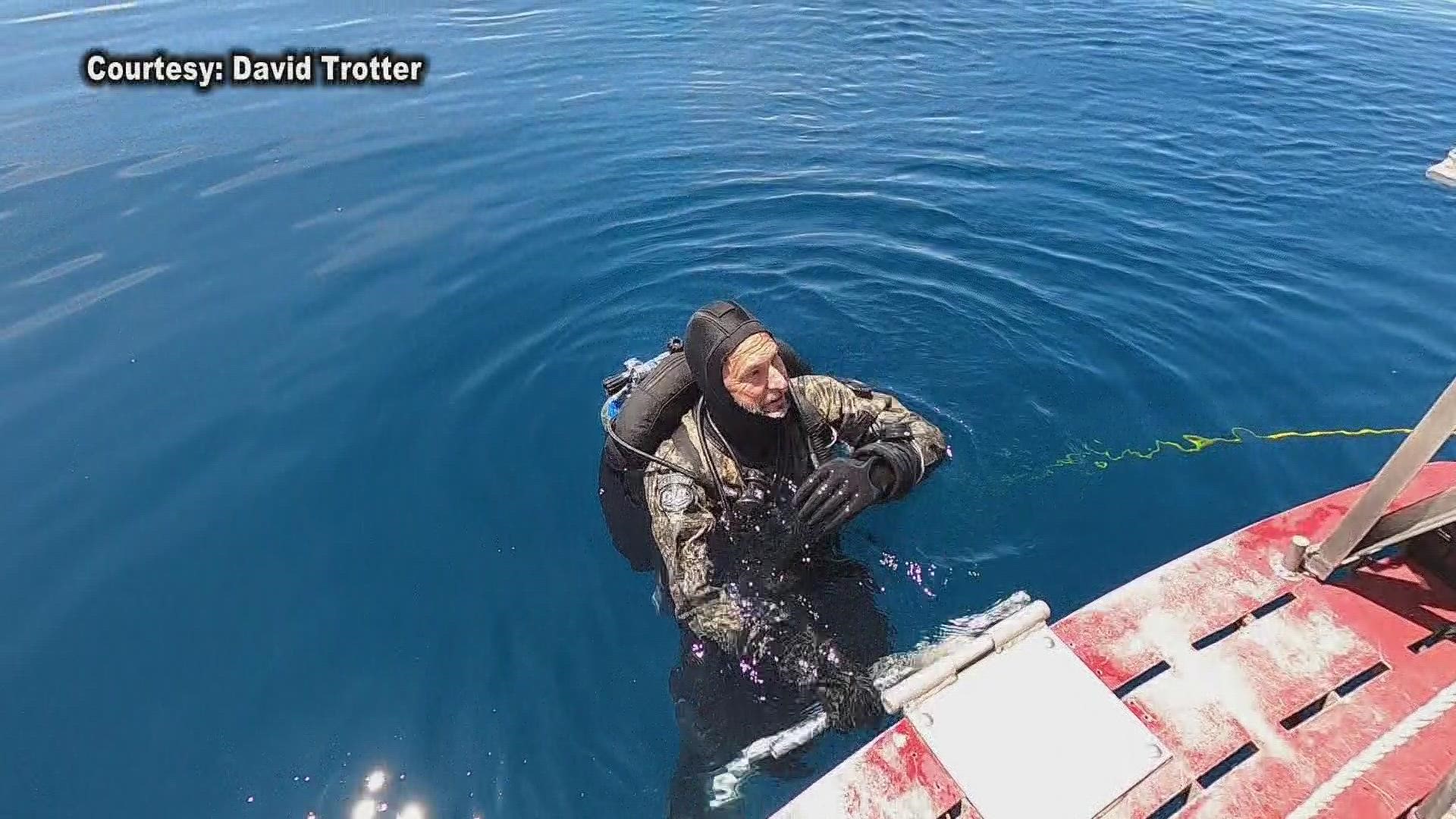 The divers estimated the ship was 170-to-180 feet in length, which meant the Water Witch was still being considered as a possibility by the group. It also had a 125-foot beam, which was common for most steamships built during the Water Witch's time period.

"The stern unfortunately had more extensive damage than I would have envisioned should have happened," Trotter said. "You could conclude that she dropped down at an angle, hitting the bottom stern first, which collapsed the stern's aft section."

As they continued to scrub through the dive footage, the smoking gun seemingly revealed itself.

"After looking closely at the remains of the site, it was pretty apparent there was a mechanical application for the walking beam engine," Trotter said. "The big boiler, though covered in zebra muscles, was also prominent, as was the ship's large smokestack which lay about 80-feet from the wreck site."

Once Trotter saw the visuals on the dive footage, he put them against historical information about the Water Witch.

He and the team were able to confirm what they'd discovered.

"We had found the Water Witch," Trotter said. "And finding it was at the top of my list."

Knowing already where the City of Detroit sank, Trotter soon realized that only 15 miles separated it from the Water Witch.

"This means both captain Ryders who commanded these ships, lost a decade apart, died within the same area on Lake Huron," added Trotter.

Trotter is keeping the numbers of the exact location on the lake the Water Witch is located, but adds that he'll eventually reveal them to the public.

Credit: 13 ON YOUR SIDE
David Trotter has been a Great Lakes shipwreck hunter since the 1970's. Trotter has found over 100 ships - most of them at the bottom of Lake Huron.

Meantime, now that he can cross the Water Witch off his list, Trotter says he'll continue searching in spring 2022 for another elusive Lake Huron Shipwreck - the R.G. Coburn, which was a 193-foot steamer that foundered in a gale north of Saginaw Bay on October 15, 1871.

"I hope I didn't miss it in my previous searches because if I did, I probably won't find it," said Trotter. "We'll see; there's a lot of water out there."