Many famous 'death cars' sit inside museums, where paying customers can get up close and personal with them. 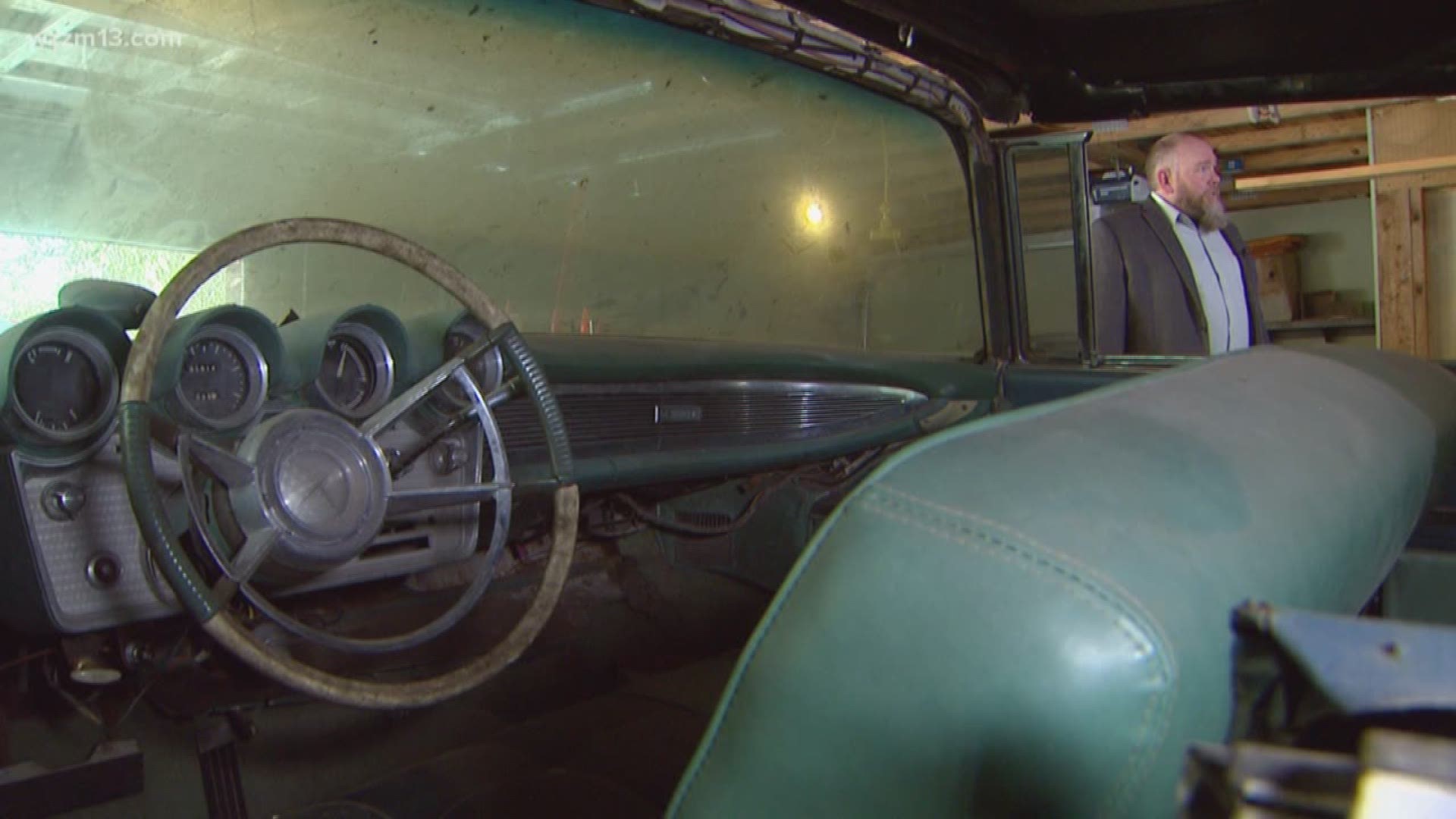 BEULAH, Mich. - Have you ever heard of a "death car?" It's a vehicle that instantly becomes infamous for the well-known individuals who died inside them.

Among the most known death cars include the 1961 Lincoln in which President John F. Kennedy was assassinated in, James Dean's 1955 Porsche 550 Spyder and Princess Diana's 1994 Mercedes-Benz S280.

Many of these "death cars" sit inside museums, where paying customers can get up close and personal with them.

Other "death cars" have vanished, taking their grisly backstories with them to wherever they are. The mysteries behind these vehicles have allowed them to become a permanent part of public imagination and discussion.

A Michigan man believes he's in possession of a "death car", and is hoping citizen sleuths recognize the car and can help him put the puzzle pieces together of what may have happened inside his car.

Credit: Bob Lucas
This is an image of the 1960 Lincoln convertible soon after it was removed from the farmer's barn in East Jordan, Mi. Bob Lucas purchased the car with the hopes of restoring it, but became more of a 'mysterious relic' instead.

"The car appeared to have been inside a barn for many years," Lucas said. "It was in pretty rough shape."

Lucas says he doesn't recall anything about the farmer or any conversations he had with him, but it didn't take long for him to realize the vehicle had some disturbing damage.

"There was a bullet hole in the middle of the windshield," said Lucas, while he pointed at a photo he took of the car soon after he bought it. "[The bullet hole] was the size of my little finger."

This is a closeup image of what Bob Lucas believes was a bullet hole through the windshield of the 1960 Lincoln convertible he purchased from a farmer in East Jordan, Mi. in 1990. To this day, Lucas believes somebody was killed inside the car.

Lucas says when he checked the interior, he saw what appeared to be a giant blood stain on the front seat, and more blood on the floor boards.

"Blood had seeped through the seat," said Lucas. "I realized something happened, but I didn't have enough sense to follow-up on it then."

Lucas says his initial thoughts about the car's condition turned to theories about what appeared to have happened inside it.

"As far as I was concerned, somebody was killed in that car and bled to death on the front seat," said Lucas.

Credit: WZZM
Many decades have passed, but both Bob Lucas and Ross Richardson hope somebody may recognize this car, and would be willing to come froward and disclose what may have happened inside many years ago.

Soon after Lucas took possession of the vehicle, he says he began restoring it. He replaced the windshield and had the interior reupholstered. He says he never completed restoring the vehicle, and it has been sitting in his garage ever since.

Nearly three decades have passed since Lucas gained possession of the mysterious vehicle. He says what might have happened has really begun to weigh on his conscience in recent years.

Has Bob Lucas unknowingly been the owner of criminal evidence?

Credit: WZZM
Bob Lucas, 93, stands next to the 1960 Lincoln convertible vehicle he purchased from a farmer in East Jordan, Mi. in 1990. Lucas strongly believes somebody was killed inside his car, and would like help to find out who.

"I had the FBI and the local sheriff over and they looked at the car," said Lucas. "One of the FBI agents said, 'can we haul this in and get some DNA?'

A few years ago, Lucas contacted a man by the name of Ross Richardson, who is an author and has investigated unsolved mysteries, shipwrecks and disappearances in Michigan. Richardson found Lucas's theory about the 1960 Lincoln to be fascinating and wanted to dig into the history of the car and see if he could leverage his resources and figure out what may have happened, if anything.

"It's definitely a curiosity," said Richardson, who wrote a book about Michigan mysteries in 2014.

Credit: WZZM
When Ross Richardson began investigating the 1960 Lincoln in 2015, he tried to determine the trail of ownership. The vehicle&#39;s VIN number found no prior owners of the car before Bob Lucas gained possession of it in 1990.

Richardson took the vehicle identification number (VIN #: OY8SH417924) and tried to follow the trail of the car's previous owners, but he found no prior owners listed anywhere.

The only registered owner of the vehicle is Bob's wife, who passed away in 2009.

"I contacted local historians from the area, and law enforcement again, but they knew nothing of any missing people," added Richardson.

Even though the front seat was reupholstered 28 years ago, both Lucas and Richardson believe that some blood stains could still be present inside the car, in particular on the foam cushion.

"There's a chance [blood and DNA could still be extracted]," said Richardson. "During the restoration process, we don't know how much was repainted under the carpet or seats."

With every direction leading to a dead end for Lucas and Richardson, they started to theorize who might have died inside the car. The two men started to consider a well-known individual who disappeared 43 years ago, and mystery has surrounded this person's disappearance ever since.

Credit: Detroit Free Press
Jimmy Hoffa was the American Labor Union leader who served as the President of the International Brotherhood of Teamsters from 1958-1971. His disappearance in July 1975&nbsp;became&nbsp;one of Michigan&#39;s biggest mysteries, and still is today.

"Jimmy Hoffa died around this timeframe," said Lucas. "I sent a letter to [Jimmy Hoffa's son] James Hoffa with a picture of the car and never heard anything from him."

Jimmy Hoffa was the American Labor Union leader who served as the President of the International Brotherhood of Teamsters from 1958-1971. He vanished in July 1975, and was declared legally dead in 1982.

He was never seen or heard from since.

"It's pretty interesting that time period, the 1960s and early 1970s, there was a lot of organized crime in Michigan," said Richardson. "One can't help but consider Jimmy Hoffa, or former furniture mogul, Harvey Leach, who's murder in 1974 remains a mystery today as well."

Leach bought Robinson Furniture in 1971 and changed its name to Joshua Doore.

What Lucas and Richardson both believe is that if this rough-looking Lincoln could talk, it would have a grisly story to tell, and they hope somebody recognizes the car, and will consider coming forward and be able to help.

"There's a story behind who died in the car, we just don't know what it is." said Richardson.

"I'd like to know what the story is," added Lucas. "Somebody knows, if they're not dead."

Bob Lucas and Ross Richardson have created an email account where people with information about the 1960 Lincoln convertible can reach them at lincolndeathcar@gmail.com.

Credit: WZZM
Ross Richardson, an accomplished author who runs a website dedicated to solving Michigan&#39;s mysteries, was contacted by Bob Lucas in 2015 to see if he could help determining of the 1960 Lincoln convertible was, in fact, a &#39;Death Car.&#39;

If you know of a story that would have a good feature for "Our Michigan Life", please send a detailed email to 13 On Your Side's Brent Ashcroft at life@wzzm13.com.