PICK A CARD, ANY CARD: Magicians turn Michigan city into 'Street of Cards'

"Every two or three feet there are playing cards all over the street," Antony Gerard said. 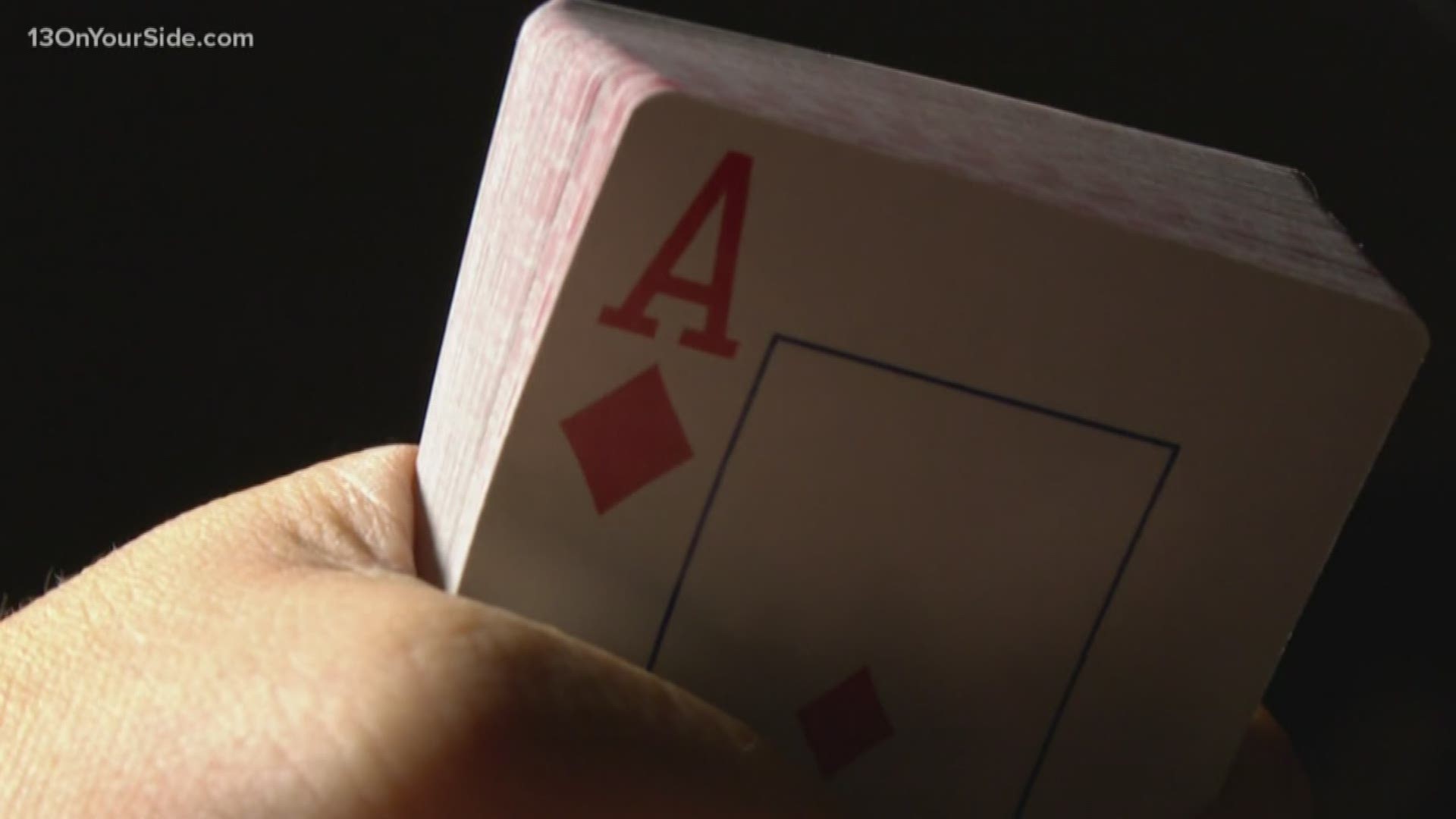 COLON, Mich. — How does one properly break in a new deck of playing cards?

Shuffling them is likely the most popular option. Many kids, back in the day, used to clothespin playing cards to their bike spokes to create a motorcycle sound. That method will certainly limber them up!

Credit: WZZM
There are may ways one can choose to break in a new deck of playing cards. Many from Colon, Mich. throw or scale them.

There are others who use playing cards as toothpicks when they have to dig a chive out in a pinch.

What about throwing them?

It's called scaling, and it was popularized by magicians in the 1800s. Scaling is the art of throwing standard playing cards with great accuracy and/or force.

A unique gathering of modern-day illusionists in a tiny Michigan town has found a way to rekindle card scaling and turn downtown into a 'Street of Cards.'

It happens in Colon, Mich., which is revered internationally as the "Magic Capital of the World." Former Michigan Senator Carl Levin made it official in 1991.

Credit: WZZM
Former U.S. Senator Carl Levin declared that Colon, Mich. was the "Magic Capital of the World" on August 2, 1991.

Colon has one streetlight and three magic shops. Nowhere else on Earth can proclaim that. Everywhere you look, there seems to be an image of a top hat and a rabbit, so the moniker fits. 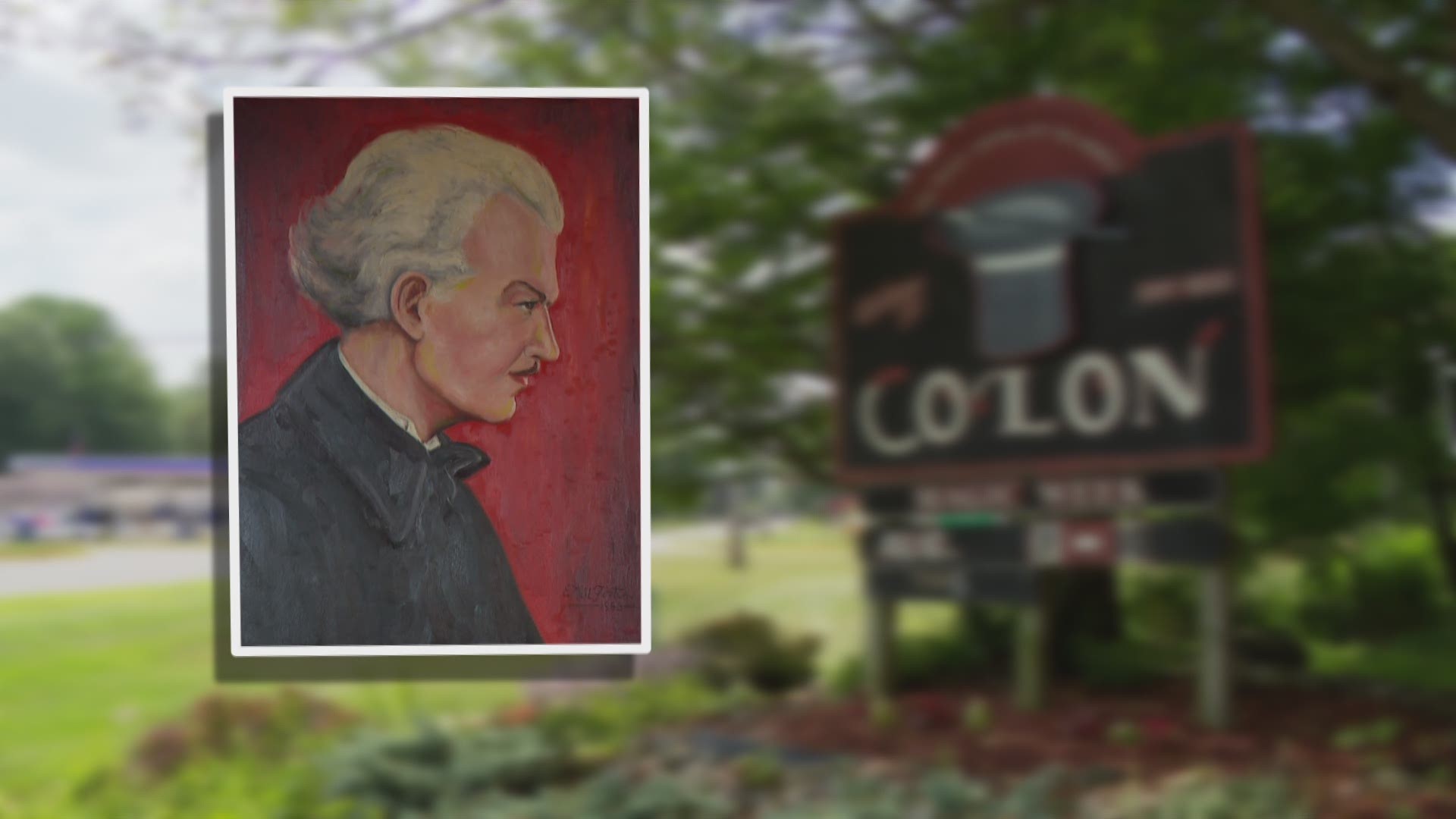 "We have an annual event here called the Abbott's Magic Get Together," said Greg Bordner, owner of Abbott's Magic Co. in Colon. "This year marked the 82nd year we've coordinated and hosted the event."

Every August, magicians from all over the United States, as well as many from foreign countries, converge on Colon for four days of public programs, lectures, trick-jamming and, perhaps most importantly, the nightlife and socializing.

"It's kind of like Vegas comes to Mayberry," joked BJ Mallen, who is a comedic magical entertainer and resident of Colon. "Our little city doubles in population every year when the Abbott's Magic Get Together happens."

"The three venues are within walking distances of each other downtown so everybody drifts in and out of each," said Mallen. "You'll have magicians doing card tricks, drinking beers and showing each other the latest techniques they've learned."

Carl Thornton, owner of Five Star Pizza, says the four-day event is his most favorite time of the year.

"You will be sitting here talking with friends, or watching a close-up magic show, and next thing you know you're running outside to see what's going on," said Thornton. "It's truly amazing that this kind of thing happens every year in a town of this size."

As the nightlife goes deeper into the evening, an unscheduled event starts to develop on the sidewalk in front of the three establishments.

Credit: WZZM
There's no scheduled time for when 'Street of Cards' begins. At some point each evening, somebody will throw a card, then dozens start doing it, too.

"We'll be on the curb conversing with other magicians and suddenly, there goes a card," said Antony Gerard, magician, and owner of The Timid Rabbit Costume and Magic Shop in Kalamazoo, Mich. "Once the first card is thrown, everybody starts doing it and downtown Colon turns into a street of cards."

Gerard is a veteran of 'Street of Cards.' He started it.

Credit: WZZM
Antony Gerard started "Street of Cards' in Colon in 1975. The unscheduled event has become a tradition at the annual magicians gathering.

"I think it was 1975 when I came to the Get Together and started teaching card scaling," added Gerard. "Back then, we'd scale the cards into the street then run out and pick them all up.

"We'd miss some, of course. The next night, we'd scale more cards and many would be left in the street."

Credit: WZZM
Antony Gerard is considered to be the "Yoda" of Colon's 'Street of Cards.' He gives scaling tutorials every night during Magic Week.

"Many of us would stand out here talking magic and scaling cards into the street all night long until the sun came up," added Gerard. "Many people come up to me and ask me how to scale cards and I will spend time showing them."

It's not uncommon that between the hours of 11:00 p.m. and 1:00 a.m., there will be as many as fifty people scaling cards into the street.

"The road gets absolutely covered in cards," said Brett Johnson, who is the Commander of the Colon American Legion Post #454.

"They're in their glory," added Kathy Earl, owner of Curly's Bar. "I don't know how many decks of cards they go through but it's a lot."

The road isn't closed. Cars still drive by, but where their tires meet the road, they're also coming in contact with all the cards, kicking up an interesting wake of hearts, clubs and diamonds. 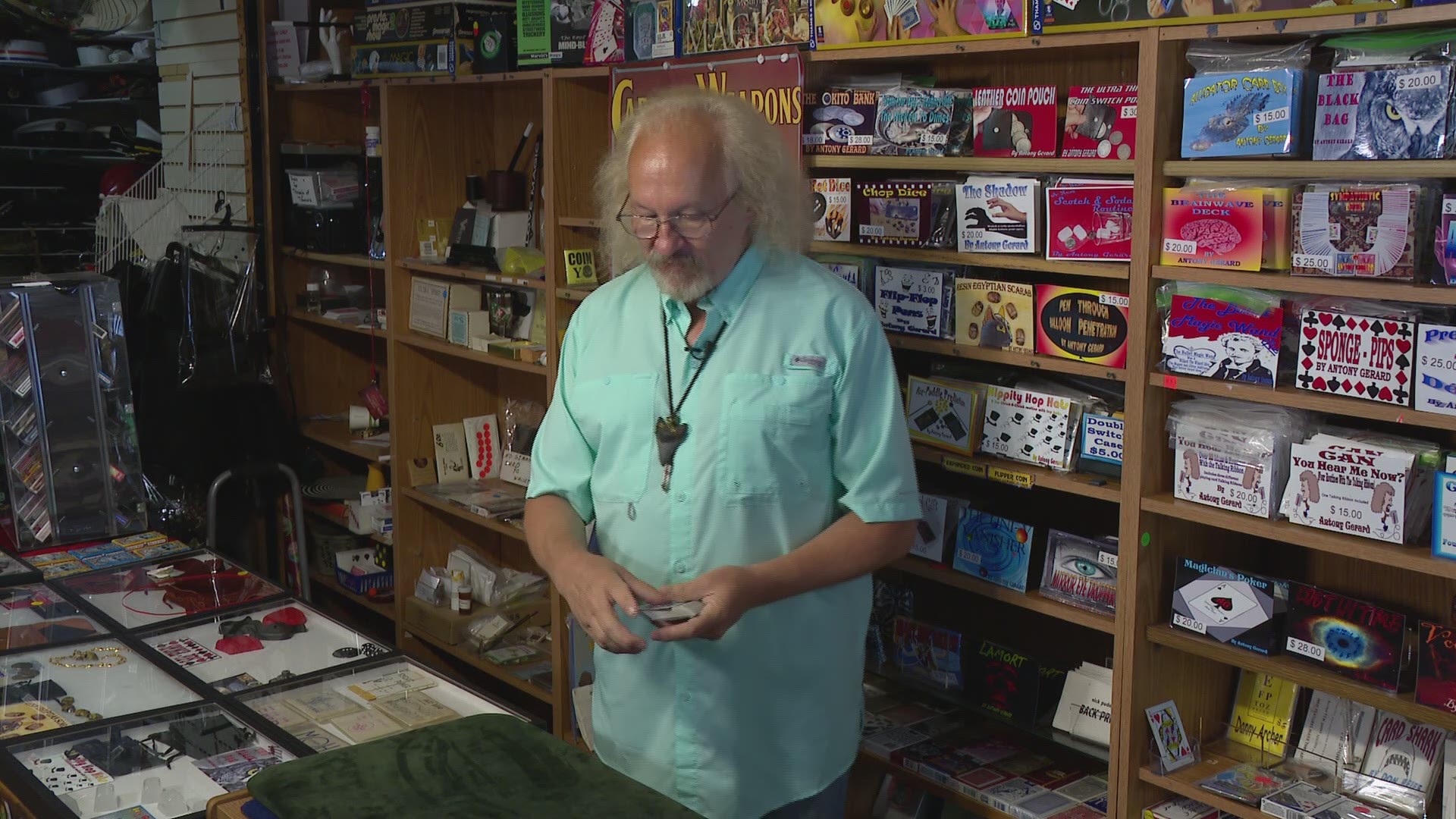 "It does look like it could be a driving hazard," joked Bordner. "If you were going to hit your brakes, you might slide a little bit on the cardboard."

For Gerard, the challenge is to scale a card across the street and hit the buildings on the other side, but for many of the younger throwers, landing a card on top of one of the buildings is the ultimate accomplishment.

"We have an elite group of card scalers called 'The Second Floor Gang,'" said Gerard. "There are only 13 people in the club, and they're able to scale cards on the rooftops of the buildings."

Members of The Second Floor Gang, like Tom Kracker and Brian Frank, will scale cards toward the rooftops until the pain in their arms is unbearable.

"I've put them on the tops of the second story buildings many times," said Kracker, a magician from Ohio. "I've even put some on top of the third story building."

"Every year, it's always the roof," added Frank. "Your arm gets kind of tired after [scaling] two or three decks [of cards], but it's hard to stop until you land one up there."

In most cities, law enforcement would be arresting people who choose to partake in this much 'littering' and 'loitering' on a nightly basis, but in Colon during Magic Week, not only do the cops allow it, they often stop by and learn how to scale cards alongside everybody else.

Credit: WZZM
During Magic Week, Colon police officers allow the 'loitering' and 'littering' that comes with 'Street of Cards.' They often take part, too.

"Colon has a couple of beat cops that walk around and I've seen them get into the action," said Mallen. "I've seen them flinging cards, too."

"Officers come up to me every year and ask me for techniques on how to scale cards," added Gerard. "It's amazing to see them get involved in the fun."

The morning after the annual gathering of magicians wraps up, locals venture out into main street in downtown Colon and spend several hours collecting all the cards and disposing of them.

By noon on Sunday, it looks like 'Street of Cards' never happened. But for the many who spent one, two or perhaps all four nights participating in the event, the memory and the image of the intersection covered in cards never fades.

"Magicians always have playing cards and do effects with them," said Gerard. "Here's something different with a tool that they work with all the time, creating atmosphere and character that can't be matched anywhere."

Credit: WZZM
Colon, Mich. has a population of around 1,200. During the annual Magic Week, the city's population doubles in size for four days.

If you know of something or someone who should be featured on "Our Michigan Life," please send a detailed email to 13 On Your Side's Brent Ashcroft: life@13onyourside.com