"I have saved recess for myself and a million other people!" Zoey Harrison exclaimed. 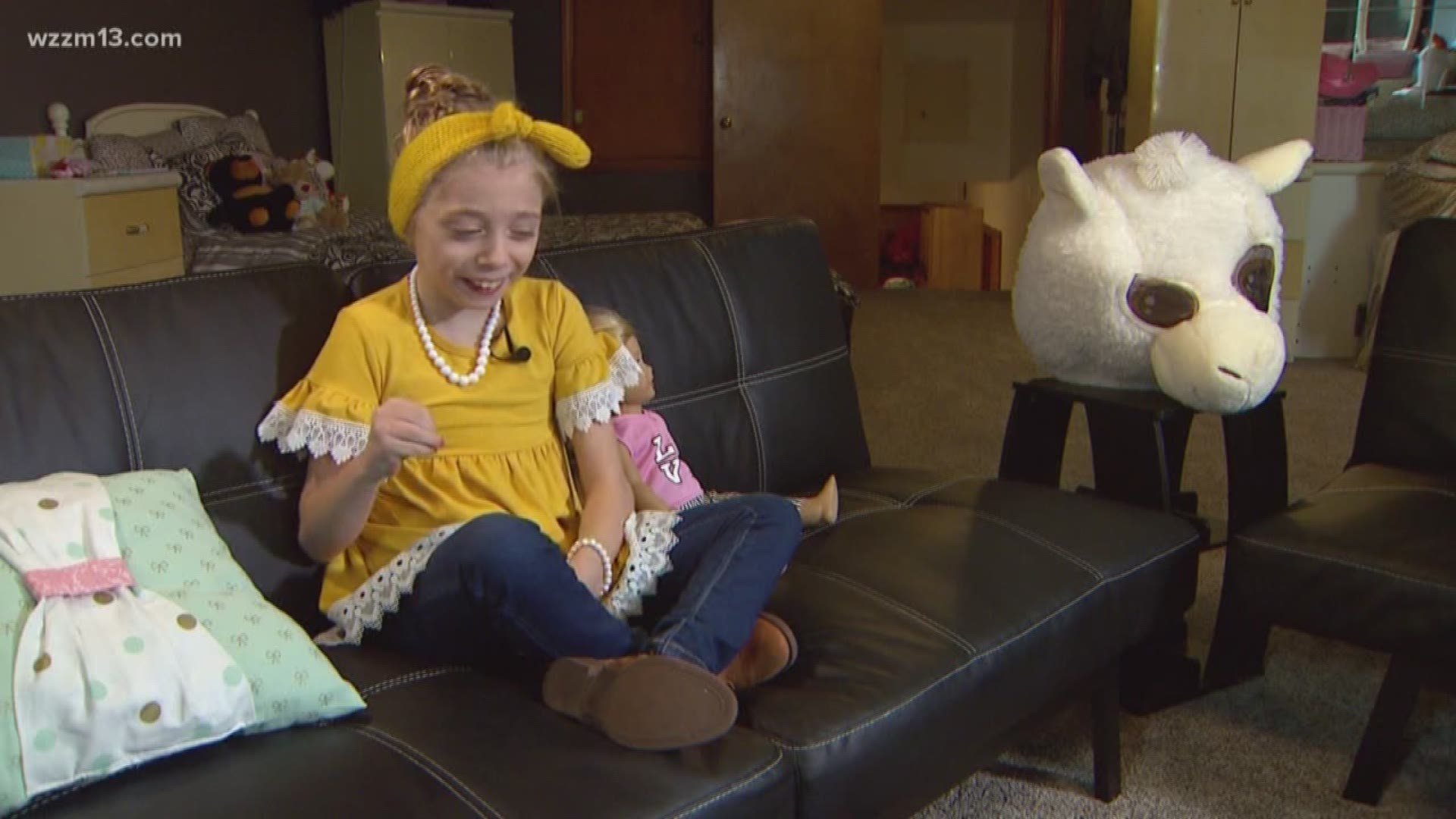 ITHACA, Mich. - Sometimes in life, ''unintended consequences'' happen. They are outcomes that are not the ones foreseen and intended by a purposeful action.

It's occurred for a family in the mid-Michigan community of Ithaca, - in a big way - and they have their disabled nine-year-old daughter to thank for it.

"She brings a lot of joy to people in our family and our community," John Harrison said of his daughter, Zoey. "Now maybe she's going to bring some joy to people all over the world."

Zoey, who is one of nine children John and Jennifer Harrison have adopted, was born with cerebral palsy, but there's cause to suggest that she's lucky to have even been born at all.

"Both of her parents had drug issues," said Jennifer Harrison, Zoey's mother. "Her birth mother has been in and out of prison on [drug] possession and larceny charges."

While incarcerated, the birth mother tried to abort Zoey.

"She pounded her stomach up against a wall," Jennifer said. "And then the second time, she paid an inmate a pack of cigarettes to beat her stomach so she would go into pre-term labor."

Zoey was born at 31 weeks and weighed just three pounds. She spent 48 days in the Neonatal Intensive Care Unit (NICU), fighting for her life. Doctors determined the trauma Zoey suffered in utero led to her disability.

"When she was born, she was black and blue and lying there helpless with all sorts of feeding tubes," John Harrison recalled. "It really tugged at me, and we decided if this little girl makes it, we need to bring her home."

The Harrisons say raising Zoey has certainly had its challenges but also its blessings. She attends public school in Ithaca. Cognitively, she's close to matching her classmates in almost every subject, but physically, it's a struggle.

She gets around the majority of the time, both at home and at school, in a motorized wheelchair, which makes participating in recess a challenge.

"Children with disabilities like Zoey take longer to get ready," said John, speaking about the school's daily recess activity. "They get cold easily and they don't get to stay outside as long."

In the winter of 2017, Zoey came home from school frustrated about not being able to play at recess with her friends.

"She was like, 'It's not worth it to go outside for recess anymore because by the time I get ready to go out, the bell rings and recess is over, and I spent the whole time getting ready,'" Jennifer said.

Zoey's frustration serendipitously led to her asking a question, which triggered an even more important response.

"I asked my mother to make me something I can wear that doesn't take long to put on so I can play with my friends at recess," Zoey said.

Jennifer started thinking, which led her to start drawing prototypes of a product that could possibly help her daughter.

"My wife started buying a lot of coats," said John. "She came up with this invention."

Jennifer took two coats, cut them down and sewed them together.

Zoey Harrison is bundled up in her Body Coat - an invention her mother, Jennifer Harrison, came up with after Zoey came home from school frustrated that she couldn't play at recess due to her disability. Her frustration triggered an invention.

The end result was one coat that could lay open in a wheelchair, allowing Zoey to sit down and have the body coat zipped up around her.

Before Zoey took it to school, John and Jennifer wanted to make sure Zoey's paraprofessional educator, who assists Zoey in the classroom, knew how to use this unique invention.

"I decided the best way was to shoot a short tutorial video," Jennifer said. "I tried to both text and email the video to Zoey's para-pro, but the file was too big.

"So, I decided to upload it to my Facebook page, then make it 'public,' so she could watch the video."

Overnight, the Facebook video, which was intended for one person to see, had been viewed 7,000 times. The 'likes' and 'shares' started racking up.

Credit: X-Ability Body Cost
The X-Ability Body Coat is actually two coats in one. Jennifer Harrison drew up some prototypes, then designed the first one herself. One year later, the Harrisons have a manufacturer making these items and they're being sold and shipped globally.

"Within a few days, the video went viral," Jennifer said. "The views were in the millions."

Before long, Jennifer's Facebook Messenger inbox had requests from 25,000 people around the world who were interested in purchasing one of the Body Coats, which cost between $115-$185.

By the time the initial surge in interest started to calm down, the Body Coat had accumulated some impressive numbers: The video had been viewed 11.7 million times, there were hundreds of thousands of comments and the family logged more than 119,000 requests.

"This can't be happening," John recalls saying about the overwhelming first wave of public interest. "We're just this normal couple from Ithaca, Michigan."

The Harrisons found themselves entering a "new normal."

"I applied for a patent for the Body Coat right away," said Jennifer.

"I contacted the Central Michigan University Research Corporation (CMURC), which is a business accelerator program," added John. "They put us in touch with patent and business lawyers and accountants who helped us get started."

"We were able to find several businesses in the Ithaca and Alma area who are helping us manufacture the Body Coats," said John. "We now have a Facebook page and a dedicated website where we're taking orders."

The name of the business is 'X-Ability.' The 'Dis' in the word disability is crossed and blurred out.

"See my ability, not my disability," said Zoey.

Thanks to Zoey Harrison's desire to play at recess, her mother's determination to conjure up an idea and an invention, and thanks to her father's connections in the community, the business of recess will thrive, too.

"I saved recess for myself and a million other people," Zoey said excitedly.

If you have a story that you think should be featured on "Our Michigan Life", send a detailed email to Brent Ashcroft at life@13OnYourSide.com. We will be sure to follow-up.