"It's an exciting moment in the life of anyone who loves history when a window to the past is opened." Valerie van Heest. 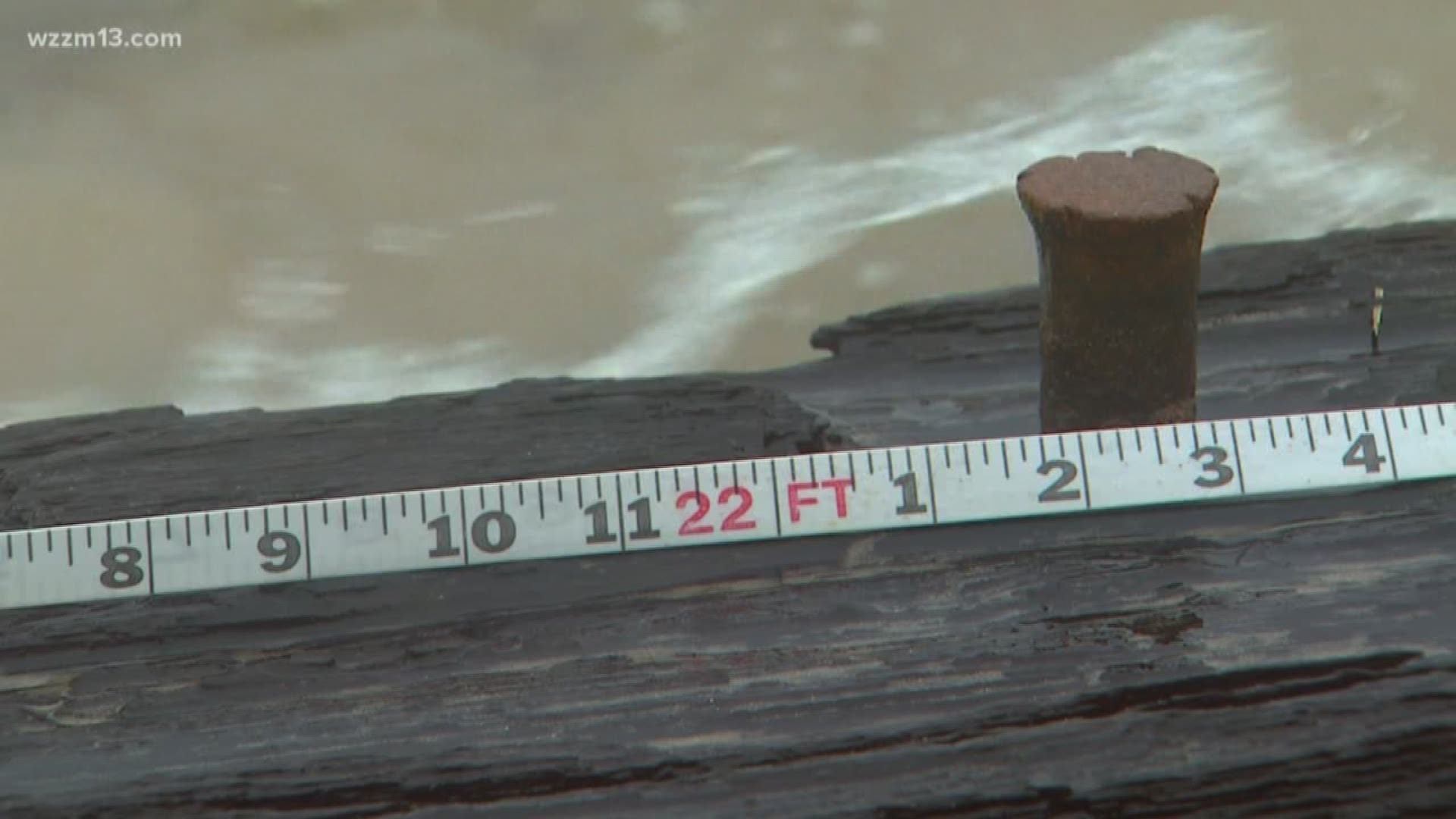 WHITEHALL, Mich. -- A shipwreck from the 1800s that had been buried under a Lake Michigan sand dune and last seen 44 years ago has been re-identified by members of the Michigan Shipwreck Research Association, thanks to Mother Nature's fury.

Torrential waves earlier this month took out part of a dune and churned the sand to reveal the shipwreck's skeleton near the White Lake channel in western Michigan's Muskegon County.

"For this brief period of time, we're getting this glimpse at this time capsule of the past," said Valerie van Heest, director of the Michigan Shipwreck Research Association.

Credit: Kevin R. Ailes
Late fall gales along the coast of Lake Michigan, just south of the White Lake channel, caused a dune to collapse, revealing the remains of the "Contest" - a 124-foot-long schooner that's been beached there since 1882.

Before long, interested people began making their way to the White River Light Station Museum for a short stroll along the pier, then over the newly-created bluff to look into this fascinating window to the past.

MSRA marine archeaologist Eric Harmsen (left) and MSRA director Valerie van Heest (right) investigated the shipwreck near the White Lake channel and determied it's the remains of the schooner Contest which foundered in Lake Michigan in 1882.

"This is not the first time the remains of this shipwreck have been exposed," said van Heest. "It appeared in 1942 and again in 1974."

Pete Caesar, who was the first curator of the decommissioned White River Lighthouse Museum, spotted the same wreckage in the same location 44 years ago. Caesar knew immediately it was the remains of a schooner and began trying to identify it.

Initially, he identified it as the L.C. Woodruff, a 170-foot schooner that went down in 1878, van Heest said. It was among more than a dozen schooners that sank during storms in the late 1800s near the White Lake channel, she said.

But van Heest and other members of the Michigan Shipwreck Research Association aren't so sure what is appearing off the White Lake channel is the 'L.C. Woodruff.'

"We recalled that back in 2005 when a beachcomber came across the remains of a shipwreck in shallow water about a mile north of the White Lake channel," van Heest said. "Wisconsin historian Brendon Baillod reviewed photographs of the wreck and suggested it was more likely the Woodruff than the one at the channel."

Historical accounts suggest the Woodruff, which was anchored off the White Lake channel during the November of 1878 storm, might have been swept into sandbars north of the channel, MSRA member Craig Rich said.

"We decided it was time to get our shovels, tape measures and slate boards and head up to the White River Light Station in attempts to officially confirm or refute Caesar's identification of the wreck," van Heest said.

On Tuesday, Dec. 11, van Heest, along with MSRA marine archeologist Eric Harmsen made their way to Whitehall.

They invited 13 On Your Side to accompany them.

"It's just important to try to assess the condition of the wreck and get as much information as we can to try and get a good identification on it," said Harmsen, who also works as the curator at the Port of Ludington Maritime Museum.

"The channel wasn't always where it is now. It was three-quarters of a mile north, so we can immediately rule those three out."

That left the MSRA with three possibilities.

Armed with all their research and tool kits, van Heest and Harmsen ventured out to the wreck site. While the waves were kicking up around them, the pair began stretching their tape measures to get specific measurements. After each measurement, van Heest wrote it down on her clip board.

The shipwreck remains that appeared along the Lake Michigan shoreline just south of the White Lake channel, are that of the schooner Contest which was lost in 1882. It's not the L.C. Woodruff, according to the MSRA.

From the bow to the last portion of the structure visible before it disappeared into the sand dune, the keelson of the ship measured 66 feet. The two also were able to identify the centerboard trunk of the ship which helped them determine exactly how big the ship was.

"We quickly were able to rule out the Madison because the vessel extended farther into the dune," said van Heest.

That left the Contest or the L.C. Woodruff as the only possibilities.

If you double that, the vessel was some 120 feet long.

"That means there's no chance that this ship is the 170-foot L.C. Woodruff," van Heest said. "Therefore, we conclude that the wreck is that of the Contest."

According to van Heest, the Contest was built in Buffalo, New York in 1855 and sailed on Lakes Erie, Huron and Michigan, operating in grain trade and lumber.

"And here it sits all these years later," said van Heest. "I don't think it's moved since 1882 when it grounded here."

What Mother Nature gives, she will also take away, eventually.

"I would venture to say that probably in early 2019, this wreck will be covered again," said van Heest. "Mother Nature is a wild woman."

The Contest could be buried for another 44 years, or it may never reappear again.

"Come down and see the Contest, but don't remove anything from the wreck site," advised van Heest. "For this brief period of time, we're getting this glimpse at this time capsule of the past."

If you have a story that should be featured on "Our Michigan Life," send a detailed email to: life@13OnYourSide.com. We will be sure to follow-up.