In the last 200 years of commercial shipping on the Great Lakes, some 12,000 sailors have lost their lives in upwards of 6000 shipwrecks.

Three of the most recent shipwrecks are:

When the calendar page turns to November each year, the Edmund Fitzgerald, the most recent major shipwreck, and the subject of the famous song, “Wreck of the Edmund Fitzgerald," tends to get most of the media attention -- unless you live in or near Rogers City, Michigan (near Alpena), where the loss of the Carl D. Bradley has never been forgotten.

The Carl D. Bradley was the largest ship sailing the Great Lakes, before it sank November 18, 1958. It was 639 feet long. It was built in 1927, and was specifically designed to haul limestone from Rogers City, Michigan to Chicago, Illinois.

“The Carl D. Bradley was a 639-foot-long freighter – the largest ship sailing on the Great Lakes at the time it went down,” said Valerie van Heest, board director with the Michigan Shipwreck Research Association, museum designer, and author of the book Lost & Found – Legendary Lake Michigan Shipwrecks.

“It was built in 1927, specifically to haul limestone from Rogers City, Michigan to Chicago, Illinois for use in making steel.”

The Bradley had survived many fierce storms, during its 30 years of service, but it wasn’t able to survive the storm it encountered in northern Lake Michigan on Nov. 18, 1958.

“The Carl D. Bradley was overdue for repairs,” said van Heest. “It suffered some damage in the spring of 1958, but the ships’ owner, U.S. Steel, decided to keep the Bradley in service delivering limestone until winter rather than lay it up for repairs.”

Then in early November, the Bradley grounded in shallow water, further damaging the hull. But U.S. Steel decided to make one last limestone delivery before sending it in for repairs.

“After offloading its cargo in Chicago on Nov. 18, the Bradley sailed toward Manitowoc, Wisconsin, where the repairs would be done over the winter months,” said van Heest. “Just before it entered the Manitowoc harbor, U.S. Steel radioed the Bradley’s captain, Roland Bryan, ordering him to return to Rogers City for yet another load of limestone.

“The crew was mad -- they had looked forward to getting home in time for Thanksgiving, but another round trip could result in them missing the holiday with their families. And on top of that, a storm front had moved in, and the lake started to swell.

Frank Mays (right) and Elmer Fleming (left) were the only two survivors after the tragic sinking of the Carl D. Bradley. The remaining other 33 sailors perished in the tragedy.

“Rather than wait out the bad weather, Captain Bryan decided to go for it. “By the time the Bradley was half was across Lake Michigan, the waves had grown to over 40 feet.

“As the Bradley fought the storm, the crewmen heard a loud noise. Seaman Frank Mays ran topside and saw sparks coming from a tear across the deck and saw the stern flapping up and down like a dog’s tail. He knew immediately that the ship was going down. He and the 34 other sailors had but a few minutes to try to get to the lifeboats and auxiliary rafts.”

Only four of the sailors, including Frank Mays, managed to get onto a raft before the Bradley plunged beneath the surface of the lake and descended to its watery grave. Two of them would soon die from the frigid cold.

The news of the sinking of the Carl D. Bradley was a big deal up in the little community of Rogers City, Michigan.

By the morning of Nov. 19th, the raft, carrying the only two survivors, Frank Mays and First Mate Elmer Fleming, had drifted to a point near Gull Island in northern Lake Michigan when they were spotted and recovered by the Coast Guard.

Mays and Fleming both recovered and lived to tell about their experiences that fateful night aboard the Bradley.

After the sinking, the families of the 33 sailors who perished aboard the Bradley sued U.S. Steel requesting over $16 million in damages.

The company who owned the Bradley &nbsp;hired a firm from California to locate and survey the wreck of the ship. The firm reported that the hull of the Bradley in &quot;one piece.&quot; As a result, media reported the wreck was caused by an &quot;act of God.&quot;

“Frank Mays told U.S. Steel and the media that he saw the Bradley break in half, but the company didn’t believe him,” said van Heest. “About a month later, U.S. Steel fired Frank Mays.”

U.S. Steel then hired a firm out of California to locate and survey the wreck. It reported finding the hull in 375 feet of water in one piece. As a result, the loss of the Carl D. Bradley was ultimately determined to be “an act of God.”

But recent dives confirm that there is a massive tear in the Bradley, just as survivor Frank Mays reported.

24 of the 33 sailors who perished aboard the Bradley were from Rogers City which, in 1958, had a population of only 4,000. Mass funerals were held for the victims.

“Thirty three families lost their breadwinner that night. Many of the wives and children left behind by the victims became destitute and struggled to get by.”

Twenty four of the 33 sailors who perished called Rogers City home. One victim, Joseph Krawczak, left behind his wife Cecelia and six children, ranging in age between 3 months and 11 years old.

“I remember the last time I saw him like it was yesterday,” said Kathryn Krawczak, one of Joe’s children. “I was just 5 when it happened.

Joseph Krawczak was among 33 sailors who perished aboard the Carl D. Bradley when the ship sank November 18, 1958. He left behind a wife (Cecelia) and six children, ranging in age from 3 months to 11 years old.

Rose Krawczak-McCrumb, another one of Joe’s children, was 7 when the Bradley sank.

“We found out about the sinking on the evening of Nov. 18th,” said McCrumb. “Our neighbor came over to the house and asked my mother is she had heard anything about the Bradley, and my mother said she hadn’t.

“The neighbor told my mother that the Bradley sank, and our mother basically lost it.”

Once the news of the Bradley’s sinking was confirmed, and Joseph Krawczak’s body had been recovered, media swarmed to Rogers City, and specifically targeted Cecelia Krawczak and her six children.

The Life Magazine photo of Cecelia and four of her children became the face of the Bradley tragedy.

“There were other kids that lost their father, too, but we just had the biggest family and got the most recognition,” said McCrumb.

Part of the media blitz was nationally acclaimed, Life Magazine, which captured a photo that forever ingrained the Krawczak family as the face of the Carl D. Bradley tragedy.

“We became very close as a family after we lost our father,” said McCrumb. “It was tough, but life went on for each one of us.”

In 2008, renowned Great Lakes’ shipwreck diver John Janzen offered to take the six Krawczak siblings out to the exact location on Lake Michigan where the Bradley went down. Once there, they placed a wreath on the surface of the water.

“[We placed the wreath] to commemorate our father,” said McCrumb. “The flowers on the wreath were taken from our mother’s garden [in Rogers City].

“It wasn’t really closure, but that moment signified our ‘goodbye’ to him.”

Nov. 18th is a day the Krawczak siblings will never forget for two reasons. Not only is it the day they tragically lost their father aboard the Carl D. Bradley, it’s also their mother’s birthday.

The Carl D. Bradley as it may have appeared on Nov. 18, 1958, getting battered by the 40 foot swells on Lake Michigan. Beneath, the Bradley &nbsp;today, resting in its watery grave, 375 feet below the surface in northern Lake Michigan.

“Every year, it’s always on your mind,” said Kathryn Krawczak. “All these years, we’ve never known to celebrate or mourn.”

Cecelia Krawczak turns 90 years old on Nov. 18, 2016. All six of her children spent time with her in Rogers City, not only celebrating her birthday milestone, but also reflecting on the loss of Joseph Krawczak, that fateful night on the Carl D. Bradley, 58 years ago.

If you know of a story that would make for a good feature for “Our Michigan Life,” please send an email to: life@wzzm13.com.

Our Michigan Life airs weeknights on WZZM 13 News at 6. 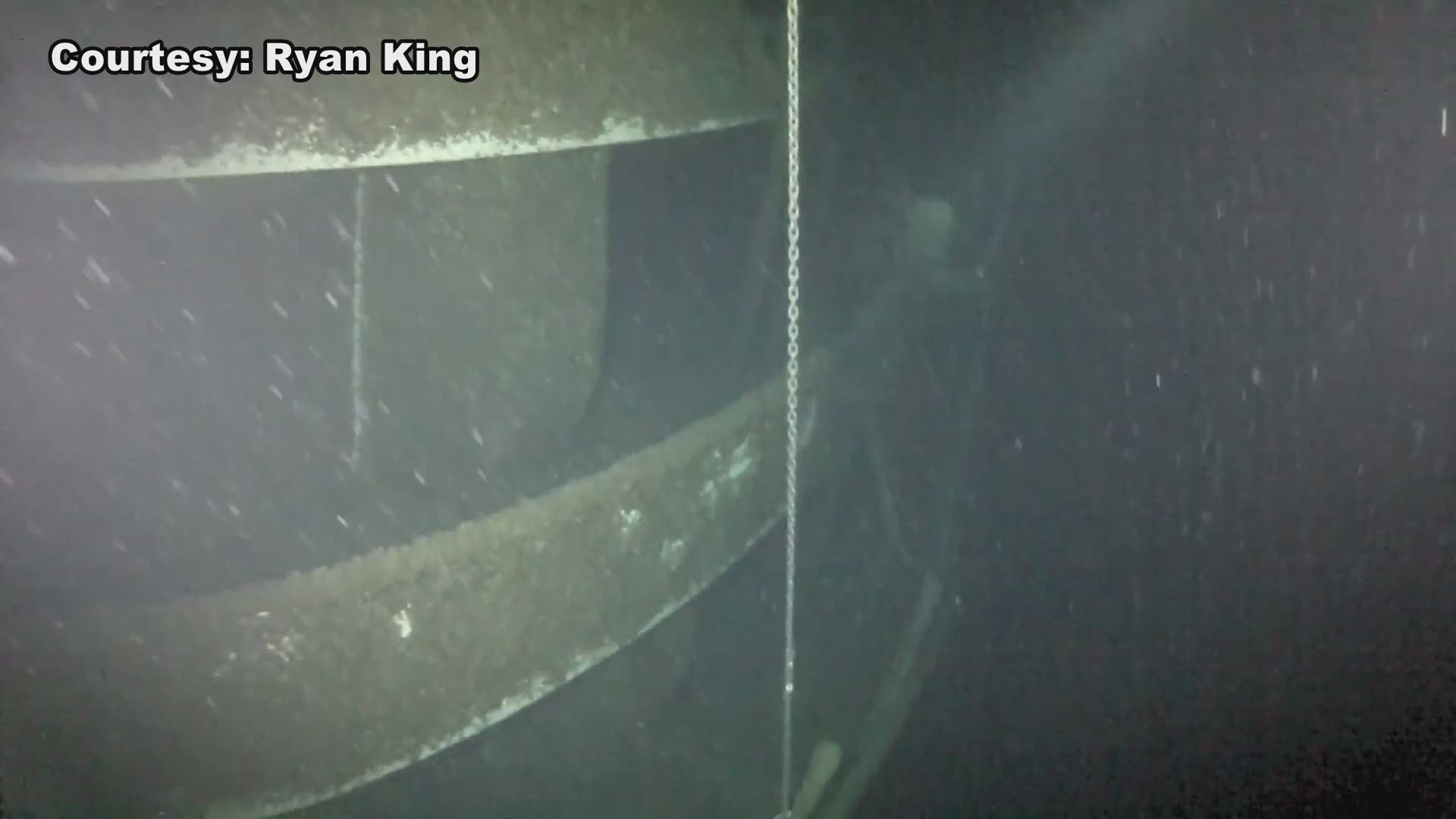 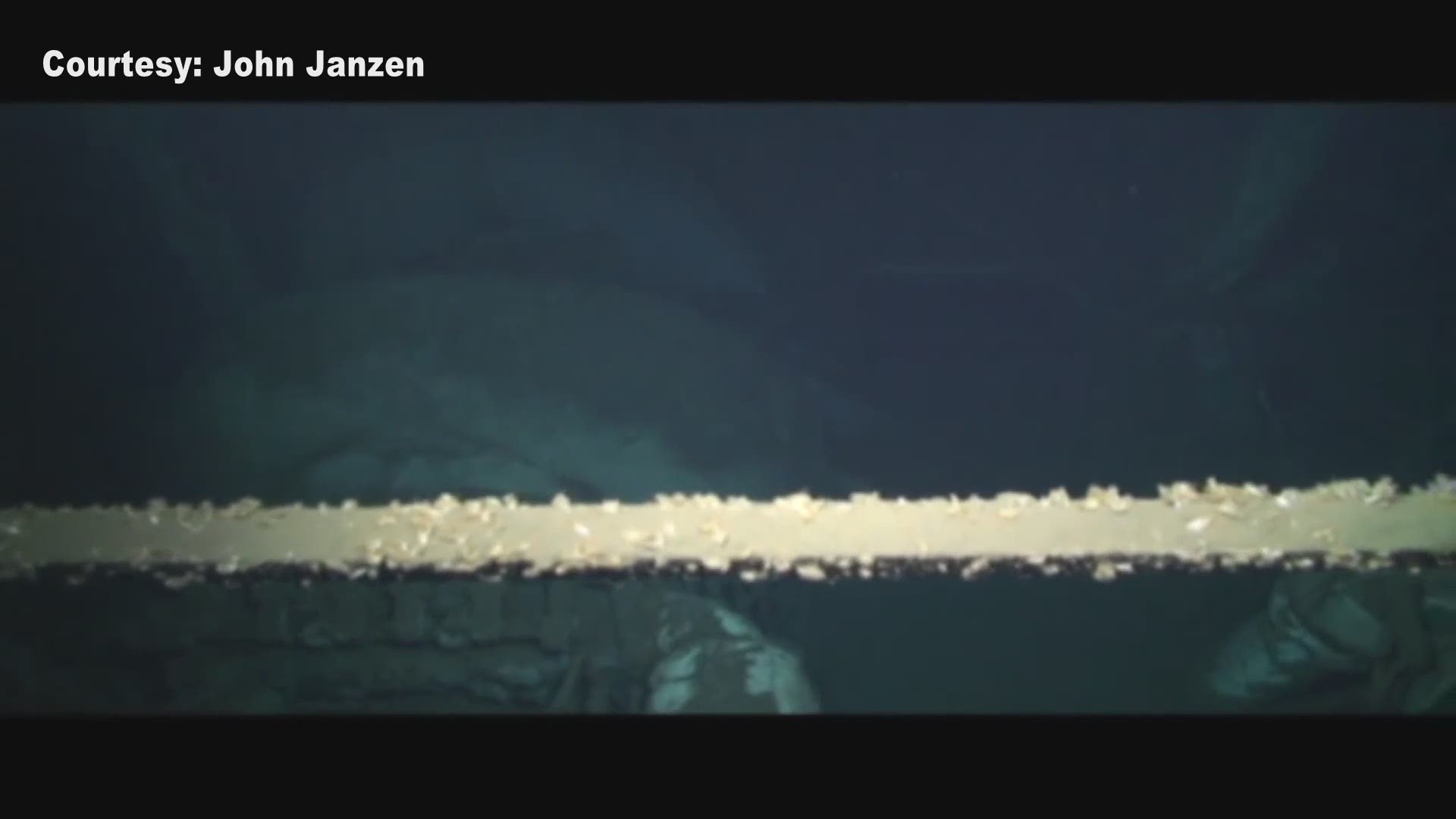