Cancer or no cancer, chemo or no chemo, side effects or no side effects, fatigue or no fatigue, he plans to keep the streak going. 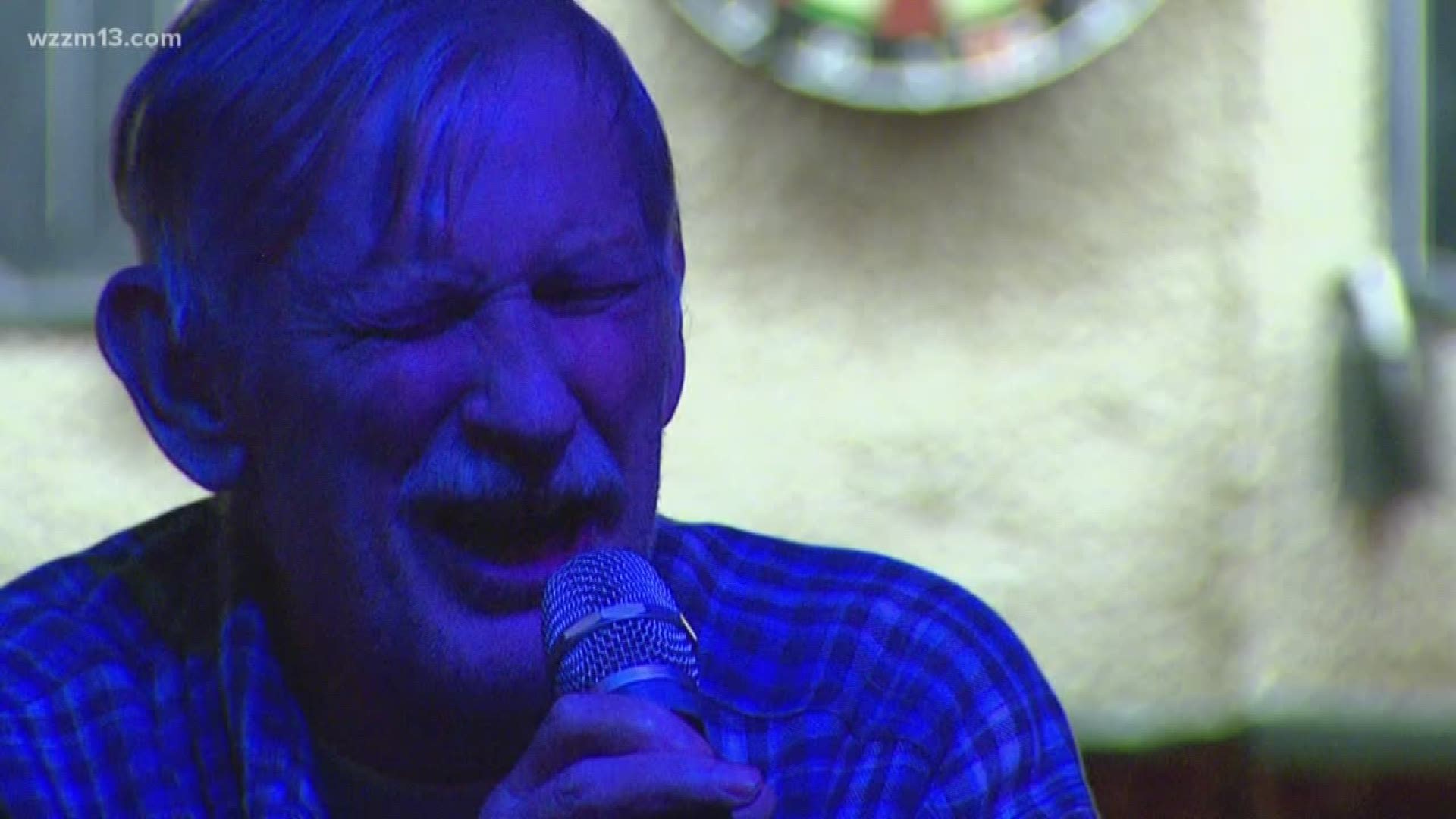 LANSING, Mich. - When you think of streaks, most people immediately associate them with sports.

Some sports streaks have stood the test of time and might never be broken, like New York Yankees slugger Joe DiMaggio's 56-game hitting streak in 1941, or the Boston Celtics' eight straight NBA titles from 1959 to1966.

There's a Michigan man who has put together a very unique streak of his own - one that nobody else has likely ever tried. It's so unique, Guinness World Records say they can't properly acknowledge it.

Tim Beam likes to perform "Kamikaze Karaoke." It's a form of the interactive entertainment where the singer tells the disc jockey to select the song. It's always a song he's never heard or sung before, so it's risky, but also fun.

"I look at singing and music as my drug of choice," said Tim Beam, 68, who has been singing karaoke at local establishments in Lansing, Mich., for over 30 years. "I've found it to be quite addictive."

Since he first manned the karaoke microphone in the mid 1980s, Beam believes he's sung close to 5,000 different songs. It's hard to argue with him about it because he logs every song he's sung, and the venue where he sang it, into a notebook.

Tim Beam has sung over 5,000 different karaoke songs. How does he know? Because he's logged every single song he's sung over the course of the past decade. He has several notebooks full of his Kamikaze Karaoke songs.

"Singing five or six songs in a night is a good night," Beam joked, as he flipped through the pages of his notebooks. "My record is 13 songs in one night, which is like giving a mini concert."

Beam says his love for singing started when he was a child, despite the fact that his parents forbid him to do it.

"Singing or playing musical instruments were not permitted by my parents," said Beam. "Church was a great place for me because I was allowed to sing there."

In 2013, Tim lost his wife to cancer. To help take his mind off her passing, he decided to really dive into karaoke and take his passion for it to the next level.

"I had to do something," said Beam.

He researched venues in the Lansing area that offered karaoke on a nightly basis and started to frequent them regularly.

"As soon as I complete a song, I get the log out and write it down," said Beam. "I also write down the date I sang the song and the location where I sang it."

Tim Beam has sung over 5,000 different karaoke songs. How does he know? Because he's logged every single song he's sung over the course of the past decade. He has several notebooks full of his Kamikaze Karaoke songs.

In winter 2017, Beam started making karaoke an every night mission. He researched all the venues in the Lansing area and found locations that had the popular form of interactive entertainment every single night.

"My karaoke friends and I started a Facebook page called 'Oke on the Town,'" said Beam. "It's used to document the journey and let everybody know where we'll be and when each night."

He likes to do 'Kamikaze Karaoke,' which is a version where he never knows what the song is before he sings it. The disc jockey selects the song and Beam just sings it.

"I always say to the crowd before I sing a song Kamikaze-style, 'hang on tight because this could be a train wreck.'"

Beam put together a healthy streak of nightly karaoke.

"I was able to go 135 straight days," said Beam, speaking proudly of what he'd accomplished. "I reached out to Guinness World Records, during that streak, but they told me there was no category created [for consecutive days of singing karaoke].

His streak ended July 5, 2017, because he started not to feel well.

"There's stress that comes with singing that much," said Beam.

He had to be hospitalized for 24 days.

"I really was worn out, and I had developed a bad cough," said Beam. "Before I was discharged, [the doctors] decided I should go see an oncologist.

"Sure enough; it was cancer."

Credit: McLaren Greater Lansing
In October 2017, Tim Beam was diagnosed with stage four non-small cell lung cancer. He started chemotherapy treatment in January 2018, and has continued his karaoke passion in spite of his fight against his terminal disease.

"They first got a chest X-ray and then a CAT Scan that showed a nodule," said Dr. Tallat Mahmood, who is an oncologist for Karmanos Cancer Institute at McLaren Greater Lansing. "People are living with it longer and longer."

Beam started Chemotherapy treatments in January 2018. His mind-set remained positive and there were few, if any side effects.

"His blood counts never dropped, and he was able to carry about his normal activity," added Dr. Mahmood.

His normal activity, of course, is karaoke.

"If that's what makes him happy, go do it," said Dr, Mahmood. "If you can't live your life, what's the point of doing the treatment."

Beam returned to the greater Lansing karaoke scene in the spring of 2018 and decided he wanted to start a new streak, even though he was fighting what is likely a terminal disease.

"I'm not just going to sit here and wait to die," said Beam. "[Singing karaoke] is helping me fight this because I'm out there using my lungs."

On April 3, 2018, Tim Beam began a new Kamikaze Karaoke streak. His only goal was to surpass the 135-day streak he had the previous year. He also knew for the streak to survive, he'd have to remain steadfast on the days he underwent Chemo treatment, and get out and sing.

"I know the streak cannot go on forever," said Beam. "My plan at this point is to do it every day, for as long as I can, or until I die."

"I thought, what the hell," said Beam. "I've got nothing better to do."

Every three Thursdays he is evaluated by Dr. Mahmood, and has to endure three hours of chemo, but he won't let the treatment wear him down.

Who goes from chemo to karaoke?

"How fabulous is that," said Dr. Mahmood. "[He] has lung cancer, and [his] lungs are still good enough to sing."

Since January 2018, Tim Beam goes to a Lansing area cancer clinic to receive chemotherapy treatments. He has chemo every three weeks. Amazingly, he's had more then enough strength afterwards to keep his karaoke streak aline.

Dr. Mahmood says it's hard to tell how long somebody will live with stage four lung cancer, but for now, Tim Beam is in remission.

"The aim right now is for him to live as good a quality of life as possible," said Dr. Mahmood. "If that means singing karaoke, so be it."

Cancer or no cancer, chemo or no chemo, side effects or no side effects, fatigue or no fatigue, he plans to keep the streak going.

"Sing like ya got a pair," Beam said loudly, during one of his cancer examinations. "I just want to sing, and I know I may wind up being a sacrifice in the end, but I'm going down with a fight."

Tim is afraid his streak may end with the pending holidays approaching. He can't find a DJ anywhere in Lansing on Thanksgiving Day who is hosting karaoke. He says he's willing to drive anywhere to keep the streak alive, so if you are a DJ, or know of a DJ willing to help Tim, please send an email to: life@13onyourside.com.

You will be connected with Tim so you and he can make arrangements to keep his impressive karaoke streak alive.

Tim Beam has been singing karaoke for over 30 years. He keeps track of every song he's sung. In April 2018, he decided he wanted to start a streak to see how many consecutive days he can sing karaoke. He hasn't missed a day since April 3, 2018.

If you know of a story that should be featured on Our Michigan Life, please send a detailed email to: life@13onyourside.com.