Black women represent less than 1/2 of 1% of commercial pilots in the U.S. Monique Grayson, Micah Clark, Alexis Brown and Brianna Jackson are changing the paradigm. 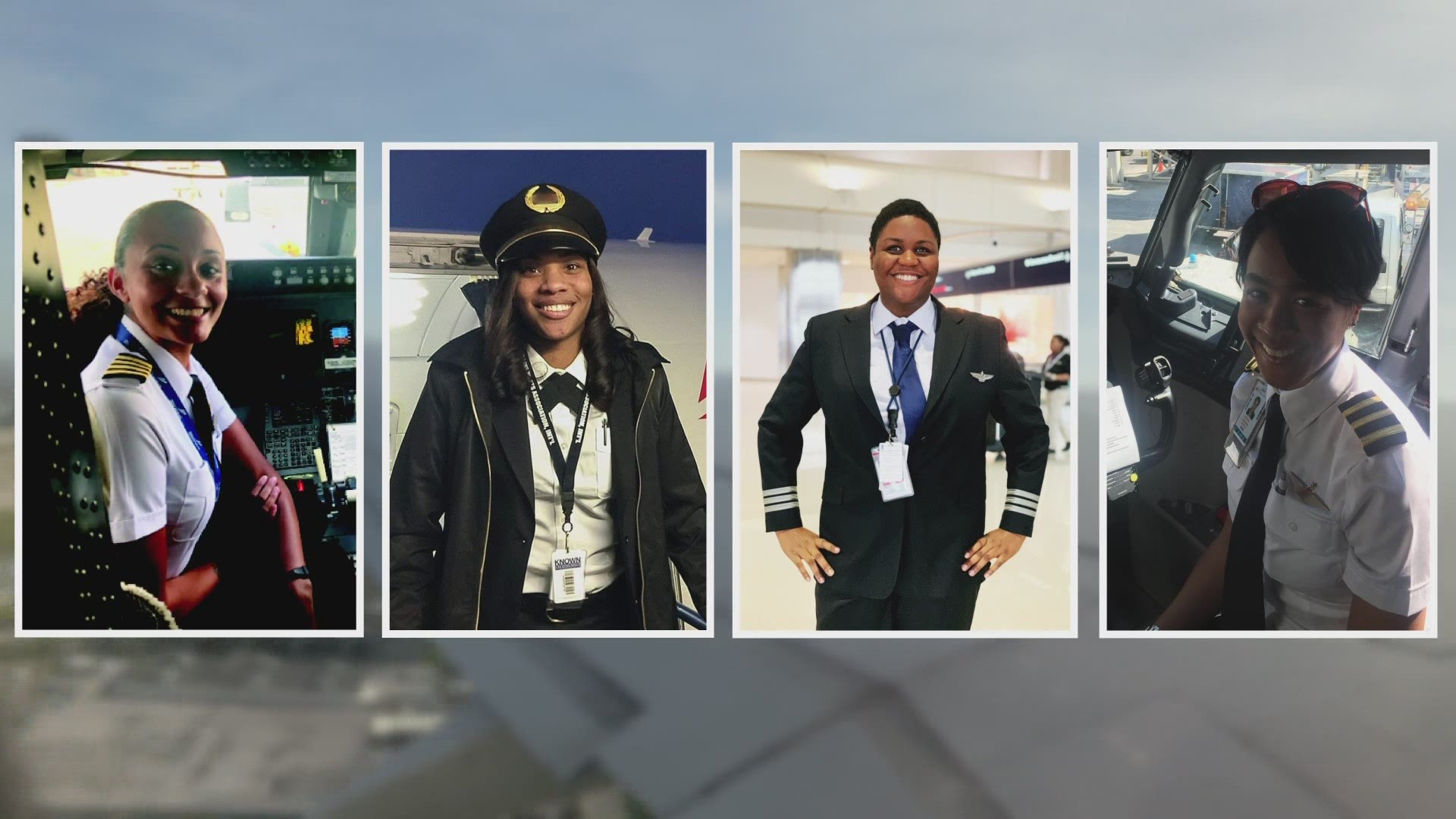 BATTLE CREEK, Mich. — We live in a time when minority women are able to elevate and occupy leadership roles in various industries on land in the United States.

Four Black women — who each attended Western Michigan's College of Aviation, — are defying the odds and soaring to new heights as commercial airline pilots, all while trailblazing a path to follow for young African American women who are interested in pursuing a career in aviation flight science.

Credit: 13 ON YOUR SIDE
Monique Grayson graduated from WMU College of Aviation in 2010, and one year later became a commercial pilot. Today, she captain's a 757 jet.

"I was about 11 or 12 years old when I became interested in being a pilot," said Monique Grayson, who is a Kalamazoo native who attended WMU's flight school from 2005-2010. "I remember getting on an airplane and thinking, 'How are we going to defy gravity for four hours.'"

Monique, who is now based in Atlanta, GA, and pilots 757 airliners for a living, adds that she used to peek in the flight deck when boarding a plane, saw all the buttons and gadgets, and decided, 'You know what, I think I can do this.'"

As soon as she arrived at WMU, her passion for becoming a pilot collided with the harsh reality that there were no other students enrolled in flight school who looked like her.

"I definitely remember going through most of my college years feeling alone," said Monique. "I tried not to allow it to affect me negatively because I knew this was something that I wanted to do."

Monique says she struggled during her first year of flight school, but persevered, leveraging an inspirational quote her father once told her: "If you see something that needs to get done, then do it."

Her confidence improved in 2006 when another woman of color walked into class with aspirations of becoming a pilot.

Credit: 13 ON YOUR SIDE
Alexis Brown graduated from WMU College of Aviation in 2011. She became a commercial airline pilot 4 years later, and has been ever since.

"I got real serious about it in high school," said Alexis Brown, who is a native of Otisville, MI, and graduated from WMU flight school in 2011. "There was only a handful of girls from start to finish in my classes and none of them looked like me, until I met Monique."

Like Monique, Alexis, too, was bothered by the lack of Black female representation at flight school. It made her wonder if she belonged and if the career path was truly for her.

"I think because of the environment many Black girls grow up in, they just don't think they can get to this point," Alexis added. "It would be nice to see more women that look like me in the cockpit."

Brown, who pilots commercial airliners today, and is also based in Atlanta, says despite never seeing any women of color becoming pilots, she remained steadfast in her desire to become one.

"Had I listened to a lot of people along the way, I wouldn't be where I'm at," Alexis said. "I don't know what I would be doing with myself right now if I wasn't in this career field because I absolutely love it."

Monique Grayson became a commercial pilot in 2011, while Alexis Brown landed her first job on the flight deck in 2015. Both women say few flights go by without somebody saying they're the first Black female pilot they've ever seen.

"Little Black girls come up to me all the time," said Alexis. "I always tell them, 'Don't let anybody tell you that you can't do what you dream of doing.'"

"99.9% of the time when you get on an airplane and you look at the front of the flight deck, what do you see," questioned Monique. "You don't see anybody who looks like me.

"When young girls of color get on an airplane and they don't see people who look like them, then they're not going to strive to be that.

"Representation plays a huge part as to why there are not a lot of Black female pilots in the aviation industry today. If we assume what we see is the truth, then we're not going to be able to progress forward past the assumption of the truth."

A few years after Monique and Alexis graduated with their pilot's licenses, two more women of color followed in their footsteps to WMU, hoping to also defy the odds.

"I grew up really enjoying airplanes and always loved going to the airport," said Brianna Jackson, who is originally from Maryland, and chose to enroll in flight school at WMU, attending from 2013-2017.

Credit: 13 ON YOUR SIDE
Briana Jackson graduated from WMU College of Aviation in 2017. She became a commercial pilot a year later and today flies the Embraer 175 aircraft.

Brianna says she had a similar experience to what Monique and Alexis endured.

"I really struggled with my [flight] training," Brianna said. "There wasn't really someone that I felt like I could go to and kind of ask for help.

"I felt out of place and alone and shut myself in a lot."

Brianna says she continued to push toward her goal of becoming a professional pilot, despite of the fact she was the only woman of color in her class.

"It does bother me," added Brianna, when asked about the lack of Black female representation on flight decks. "I thought as the years progressed, there would be more people behind me going through."

Like Monique's confidence level several years before her, Brianna's perked up when Micah Clark joined her class.

"When I was in high school, I asked myself, 'Okay, what do you want to do when you grow up,'" said Micah, an African American female pilot-to-be, who grew up in Detroit and attended WMU flight school from 2013-2016. "A pilot was never a thought because I don't see it."

Credit: 13 ON YOUR SIDE
Micah Clark graduated from WMU College of Aviation in 2016. Two years later, she became a commercial pilot. Today, she flies the CRJ 900 aircraft.

Micah says her burning desire to become a pilot eventually outweighed the fact that she never saw any Black female pilots, after she took an introductory flight and fell in love with it.

"Why not me," Micah asked herself after that first flight. "Something has to give."

Micah flew through WMU and graduated one year before Brianna. Micah would go on to get her first job as a commercial airline pilot in 2018, and ever since, she knows she's a role model for future Black female aviators.

"On each leg of a flight, there's at least one person that says something to me," Micah said. "On one flight, a young African American female came up to me and said, 'Hey, you're the first African American female pilot I've seen in my life.' She ended up getting my captain's number and I later found out she had changed her career choice from being a truck driver to being a pilot."

Brianna became a flight instructor soon after graduating, then joined Micah on the flight deck, accepting her first job as a commercial airline pilot in 2018.

"I'll just kind of sit back and I'll have one of those moments where I'm like, 'Oh, I'm really up here; I'm really doing this,'" Brianna said. "Aviation is really all that I know and I've put so much blood, sweat and tears into it.

"It's everything I imagined it could be."

Robert Bunday, who is the chief flight instructor at WMU's College of Aviation, taught Monique, Alexis, Brianna and Micah when they came through flight school. As a former commercial airline pilot himself, he, too, would like to see more women of color represented in the cockpits.

"I think the reason why there's so few African American female pilots is because there's a belief that there's a barrier to entry," said Bunday, who's in the midst of his 23rd year as a flight instructor at WMU. "In reality, there is no barrier to entry and I would encourage any young lady of color who wants to pursue aviation to take command and pursue it.

"50% of the pilots that are needed in the next ten years haven't even started training yet, so the door is wide open."

Bunday also says he's very proud of Monique, Alexis, Micah and Brianna for making it to the flight deck.

"Whether they want to admit it or not, they're trailblazers," added Bunday. "I've taught a lot of students, but I will never forget these four.

"They're first class all the way around."

Even though these four successful pilots didn't attend flight school together, they've become deeply connected because they're all WMU alums who didn't let a bunch of statistics, and what they didn't see, stop them from becoming commercial pilots.

Credit: 13 ON YOUR SIDE
The sky is not the limit for Monique Grayson, Alexis Brown, Micah Clark and Brianna Jackson, who are women of color who've become commercial pilots.

"Some people need to see a thing before they can believe it can be a thing," said Monique. "Don't conform to society's limitations; it's imperative that you speak your truth and your story so that you can inspire somebody else."

It has been 100 years since Bessie Coleman became the world's first African American female pilot.

A century later, not much has changed.

But these four WMU aviation grads are doing all they can to forge a path so more women of color can see that a career on the flight deck is obtainable, should they choose to pursue it.

"Orville Wright once said, “If we all worked on the assumption that what is accepted as true is really true, there would be little hope of advance,” Monique said. "Little did he know how much more meaning that quote would have more than a century after he and Wilber [Wright] performed their first flight."

Not only are Monique, Alexis, Brianna and Micah connected because they're women of color who became airline pilots and attended WMU, they're also members of a non-profit called Sisters of the Skies, Inc. The organization was created with the expressed purpose of increasing diversification (In particular, African American females) on the flight decks across all the airlines in the United States.

S.O.S. provides: fellowship, mentorships, scholarships, STEM and outreach to women of color who want to make a career on the flight deck.