Spring Lake is 'spinning' thanks to man-made Ice Carousel

Paul McMullen, Kyle Beeck and Chad Hutchison made an 'Ice Carousel' on Spring Lake. The giant ice disc stays spinning for 20 minutes once they get it going. 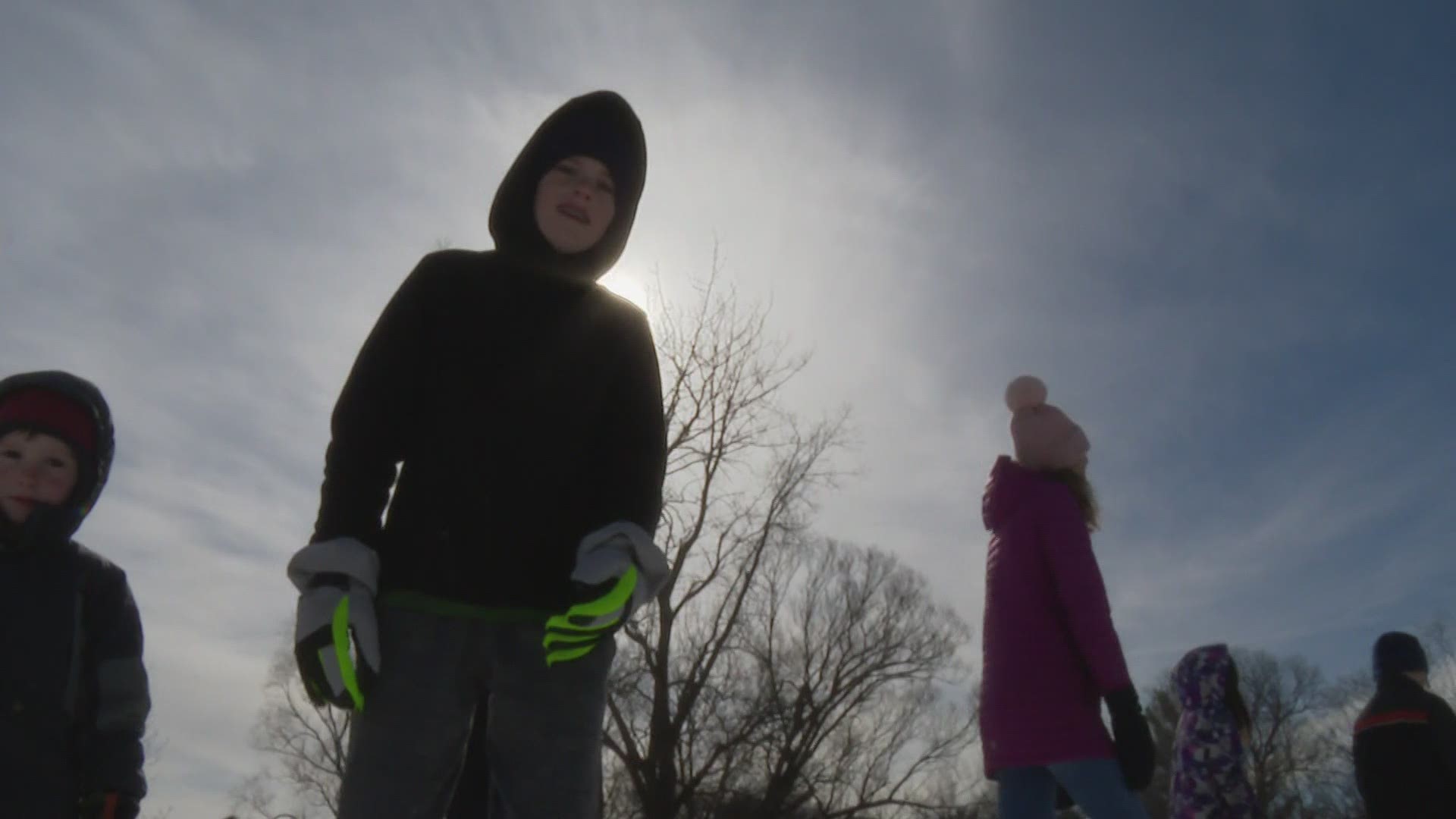 SPRING LAKE, Mich. — What are some of the usual winter activities people do when Michigan lakes freeze over?

Three dads from Spring Lake and Grand Haven decided they wanted to create a winter experience that was different, and maybe a little dizzying, too.

"Recently, my daughter Olivia was on YouTube and saw an Ice Carousel that was made in Finland," said Paul McMullen, who's the braintrust behind the spinning ice disc. "She came to me and asked, 'Dad, can you make one of these?'"

How could McMullen tell his daughter he couldn't. He contacted two of his friends, Kyle Beeck and Chad Hutchison, who live nearby and who both happen to be engineers.

On a day in late January, the three men ventured to Petty's Bayou Boat Launch, which is located in Spring Lake. All three men researched how to make an Ice Carousel, so they were ready.

"We first checked the depth of the ice and it was 8-inches thick," said McMullen. "So, we knew we weren't going to fall through."

Beeck and Hutchison were responsible for creating the perfect circle.

"I was the pivot person," said Beeck. "I stood in the middle while tightly holding a line while Chad scratched a circular line for Paul to cut."

For an Ice Carousel to spin properly, a perfect circle had to be made.

"I'm the chainsaw guy," joked McMullen. "Once the guys got the circle made, my job was to cut along the line."

After a few hours, McMullen says they had made the perfect ice disc.

Once the circle was cut, and all the lingering ice chunks and slush had been removed from the water separating the disc from the rest of the ice surface, they needed to see if the thing would spin.

"You have to have three people equal distance apart around the carousel, forming a triangle," said McMullen. "Then each person uses a ski pole, or something strong, and we keep pushing and pushing until we're spinning."

"It's a rare phenomenon and tough to make," said McMullen. "But, everybody seems to enjoy it and it's certainly different."

McMullen says the Ice Carousel is built over an area on the lake that's only 3 feet deep. He says he goes out there every day to check for cracks in the disc, insuring it continues to be safe.

And because of the cold temperatures at night, McMullen brings his chainsaw everyday to cut away the newly-formed ice so the disc continued to be free from the rest of the ice surface.

"I think it's the coolest thing ever," said McMullen.

If you're interested in taking a 'spin' on the Ice Carousel, Petty's Bayou is located on N. Fruitport Rd about a half mile north of Spring Lake Country Club. 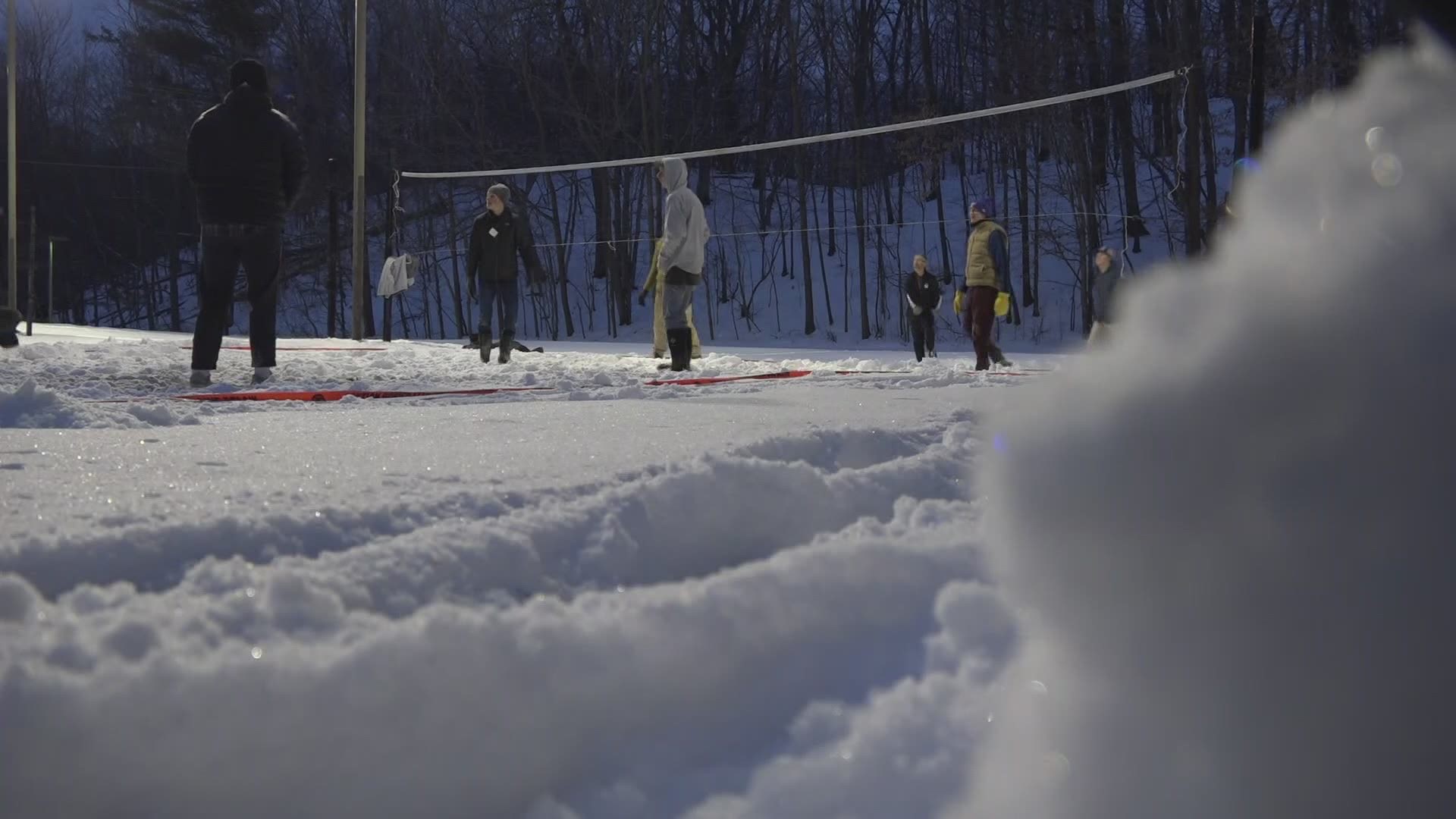