On Oct. 26, 1952, strong winds caused the 'S.S City of Grand Rapids' steamship to snap from its mooring and swing into the St. Joseph Channel, blocking traffic. 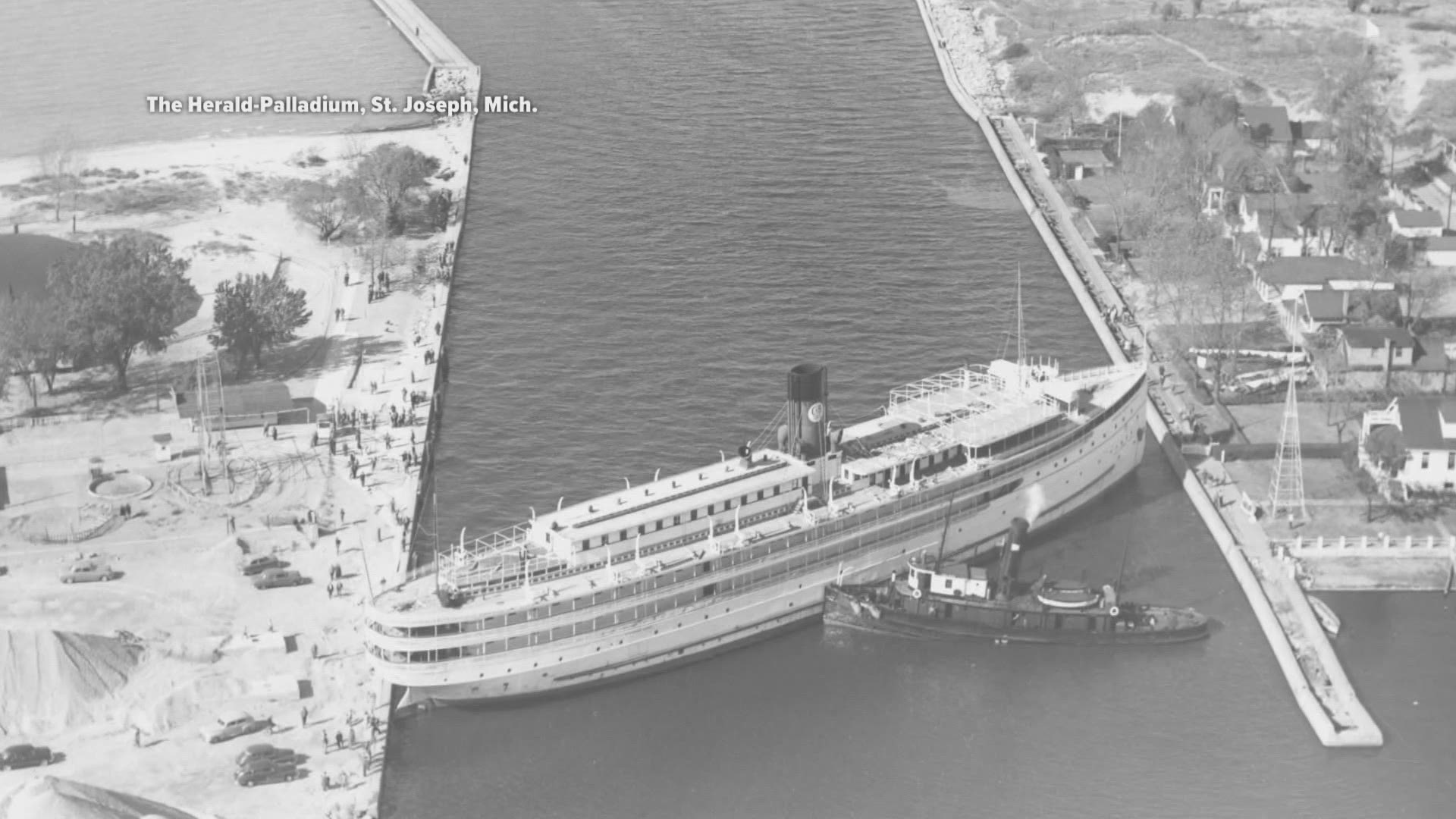 ST. JOSEPH, Mich. — The mammoth cargo ship, that blocked the Suez Canal, was finally freed Monday, allowing traffic to resume through the crucial waterway. The nearly week-long jam will likely have long-lasting repercussions, as an estimated $9 billion in global trade was lost every day the vessel was stranded.

Though nowhere near as costly, 69 years earlier, a similar scenario played out in West Michigan, when strong wind caused the steamship 'S.S. City of Grand Rapids' to snap from its mooring and swing sideways into the channel, blocking traffic, in St. Joseph, Mich.

From the turn of the century up through the second World War, travel by steamship on the Great Lakes was common. One of the largest passenger steamers at that time was the 'S.S. City of Grand Rapids,' which was close to 300-feet long and could carry as many as 2,200 people.

"It went from Chicago to Holland to Benton Harbor, all in one day," said William Lafferty, who is partner of the exhibit design firm Lafferty van Heest and Associates. "She launched on St. Patrick's Day, 1912, in Cleveland, Ohio and retired in St. Joseph in 1951."

The steamer remained tightly tied to the channel wall in St. Joseph, until Oct. 26, 1952, when the ship set sail again, except this time on its own.

The S.S. City of Grand Rapids began swinging from where she was docked into the middle of the channel, then eventually reaching the other side.

A Canadian tugboat named 'Helena' rushed to where the stuck steamer was and did it's best to battle the fierce storm and strong lake surge to push the ship back to the dock.

"It's unknown how long the ship was angled like that and blocking maritime traffic going in and out," said Lafferty. "None of the archived historical records provide that information."

On Nov.1, just four days after the incident in the channel, it was decided that the S.S. City of Grand Rapids was to be towed from St. Joseph to her new owner in Hamilton, Ontario, Canada, by the same tugboat that rescued her.

Once the iconic steamship arrived in Hamilton, it was scrapped.

"The incident in St. Joseph made worldwide news," added Lafferty. "The aerial photo taken by The Herald-Palladium Newspaper was a visual reporters couldn't resist."

Lafferty says before the ship was destroyed, most of its contents were auctioned off.

"The ship's whistle ended up at a piano factory in Kalamazoo, while paintings that hung in the grand staircase, as well as the lifeboats, sold for just $20 each."

Lafferty added that the wheel is currently on display at a yacht club in Waukegan, Illinois.

"This story likely would have never been resurrected had the issue not happened recently in the Suez Canal," Lafferty said. "Instead, a forgotten moment in Michigan maritime history is no longer forgotten."

Some of the artifacts from the S.S. City of Grand Rapids steamship aren't the only things that survived. The tugboat, Helena, that pushed the ship back into place, then towed it to Canada, is currently an exhibit on a waterway in Montreal.

It's been renamed, "Daniel McAllister."

Credit: tugboatinformation.com
The 'Helena' tugboat, which towed the S.S. City of Grand Rapids' steamship to Canada, is a historical landmark today in Montreal.