WZZM Alert Center
Live Video Breaking
News Weather Delays/
Closings
© 2020 WZZM-TV. All Rights Reserved.
The Heart of Walk & Roll | Cop puts collar on ALS
"Within minutes after being diagnosed, I told myself, 'I have ALS, and the death and the junk that comes with it, but I will have victory over all that.'"
Author: Brent Ashcroft
Published: 12:37 PM EDT April 26, 2018
Updated: 6:26 PM EDT April 27, 2018
MICHIGAN-LIFE 0 Articles

ALLENDALE, Mich. - Every 90 minutes, somebody in the United States is diagnosed with ALS (Amyotrophic Lateral Sclerosis), or Lou Gehrig's Disease, and told the grim reality of the disease.

Around 6,000 people in the U.S. are diagnosed with ALS each year, which averages out to 15 new cases each day.

ALS is a disorder that affects the function of nerves and muscles in the body.

There is no cure.

The life expectancy of a person with ALS averages about two to five years from the time of diagnosis, although some have lived beyond five years.

Bylsma did it all during his time as a police officer. He performed traffic stops, worked investigations and was also a part of the special response team.

"After my military career ended, I just felt that I was called to go into police work," said Bylsma."Every day I went into work, I was somebody's shield, and I took great pride in that."

Bylsma has always lived a healthy life. In 2005, he got into running and started participating in races all over the state. He loved it so much that he registered to compete in marathons and ultra marathons.

"I never won a marathon, but I just really enjoyed running and the atmosphere around running," said Bylsma.

Life was perfect for this married father of three until February of 2017.

"I tore a calf muscle," said Bylsma. "I didn't think it was a big deal, but I had a friend who was a physical therapist so I asked him to check it out."

Bylsma says his friend gave him some exercises to do that might help him with the injury.

"After about two weeks, I noticed that I couldn't pick my toes up off the ground," said Bylsma. "[My physical therapist friend] told me to go see my doctor, which i did."

Bylsma says his doctor did a bunch of tests on his leg.

"When the results came back, my doctor said that I either had something pinched really bad in my back or I have ALS," said Bylsma. "I was then set up with a neurologist a month later, where I had muscle testing done all over my body.

"The neurologist diagnosed me with ALS."

Bylsma decided he wanted to seek a second opinion, so he went to Mercy Health Saint Mary's Campus in Grand Rapids, Mich.

"[Saint Mary's] put me on a six-month medication protocol," said Bylsma. "When that concluded, the neurologist at Saint Mary's confirmed that I had ALS.

After the second opinion confirmed he had ALS, many thoughts began racing through Bylsma's head.

"A piece of me left that day because your mind automatically goes to dying," said Bylsma. "I knew this was a fatal blow to anybody who received the news."

He says he never asked the question, 'why me?' Instead, Scott Bylsma decided to immediately adopt a different mindset and ask, 'why not him?'

"This disease didn't just happen to me," said Bylsma. "It's happening to people all over.

"I thought what would make me so special to not receive [a diagnosis of ALS].

"Within minutes after being diagnosed, I told myself, 'I have ALS, and the death and the junk that comes with it, but I will have victory over all that.'"

Since then, Scott Bylsma found himself entering into a different kind of race - a race he was now running against time.

Bylsma admits he has asked the question, 'why them', referring to his wife and three children who will have to watch as ALS takes its course.

"That's what hurts the most for me," Bylsma said, fighting back tears. "I don't care that I have ALS; it's seeing people that you love have to go through what they go through, having to deal with it."

A few weeks after receiving the diagnosis, Bylsma returned to running. He was still walking then, though the muscles in his legs were weakening.

He registered for and ran in Nana's Run, which is an annual 5K event, held in downtown Grand Rapids, which raises awareness about ALS and funds that will support patient and physician education, ALS patients and their families and ongoing research within Michigan.

Nana's Run is put on by the ALS Association Michigan Chapter and Mercy Health Hauenstein Neurosciences, in partnership with the Daniel and Pamella DeVos Foundation.

"While I was running in Nana's Run last year, I never thought for a second that it would be the last time I would ever run in a race," said Bylsma. "I was enjoying the moment."

Wherever Bylsma went that day, a large entourage followed him. A group known as 'Team Scott' showed up to support him in the race, wearing special t-shirts and ribbons. 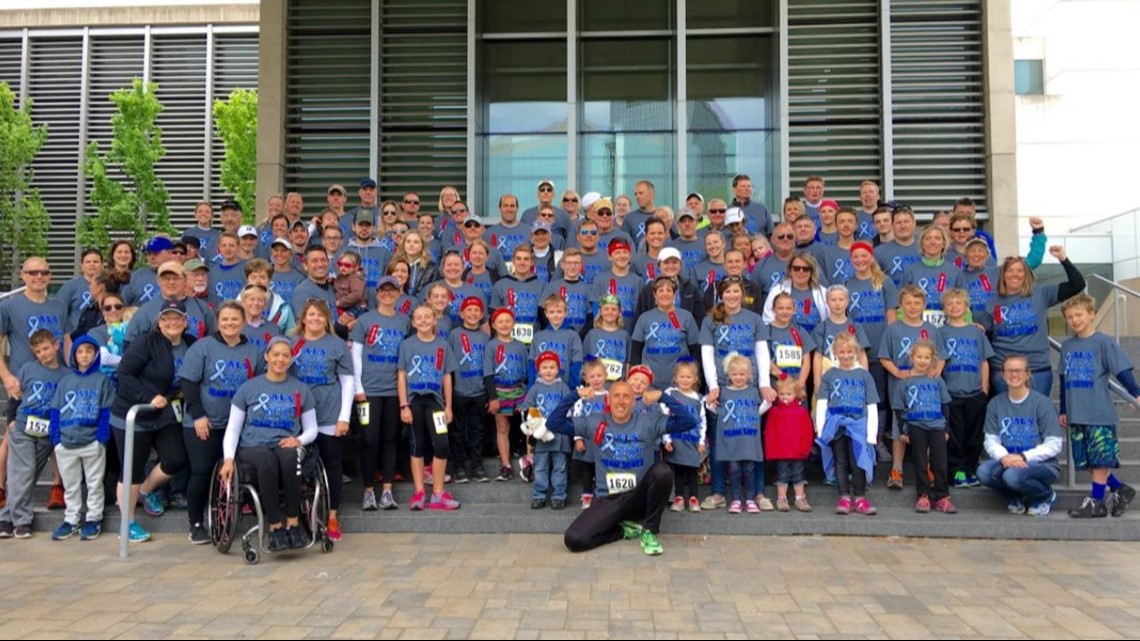 "To have hundreds of people come to show their support for you as a person is very humbling," said Bylsma.

Many of his fellow members of law enforcement came out in support as well. One of them ran the race with Bylsma while wearing her police uniform.

"She ran beside me the entire time and crossed the finish line with me," said Bylsma.

Officer Jenny Rood was her name.

Officer Jenny Rood was one of the many Grand Rapids law enforcement officials&nbsp;who supported Scott Bylsma when he ran in the 2017 Nana&#39;s Run. Officer Rood ran along side Bylsma, while wearing her police uniform, and crossed the finish line with him.
WZZM

"The way he's handled [his ALS] has been awesome and amazing to witness," said Rood, who has been a member of the Grand Rapids Police Department since 2000. "It was amazing to finish that run with him."

Even though his condition has worsened a year later, Bylsma plans to participate in the 2018 Nana's Run, which is slated for Saturday, May 5.

Instead of running, he'll be rolling.

Scott Bylsma spends most of his days in a motorized wheelchair. He says he can still stand, but needs assistance. Scott was disgnosed with ALS in the spring of 2017. Life expectance after diagnosis is 2-5 years.
WZZM

"I'm going to do it in my manual wheelchair," said Bylsma. "I really want to be out there and be a part of it again.

"You might see a police officer in uniform pushing me."

If that happens, it'll be officer Jenny Rood.

"I hope to start the race with him and and cross the finish line with him again," said Rood.

That's why when he and his wife Sharon leave their Allendale home and go for a 'walk & roll', it's more than just time outside enjoying the elements.

He's accepted that the long strides he once had while running must surrender to short shoves on the top of the wheels on his wheelchair.

His race against time rolls on, and he and his family know there are grueling days ahead, but one clarity will remain steadfast throughout - Scott Bylsma doesn't need a finish line to declare victory over ALS.

"I have hope past my last heartbeat, and I have the right now," said Bylsma. "Because of those two things, ALS cannot defeat me or my spirit."

It's estimated that at least 25 law enforcement officials from the Grand Rapids Police Department (some in uniform and some not in uniform), will be participating with Scott Bylsma in Nana's Run 2018.

If you'd like to learn more about Nana's run, or register to run in the event, click here and you'll be taken directly to the registration website.

To learn ore about Scott Bylsma, and his ALS journey, the family has set up a GoFundMe page designed to help pay for the mounting medical expenses.