Alumni from a former West Michigan high school refuse to let their school spirit fade, even though their school itself faded away fifty years ago. 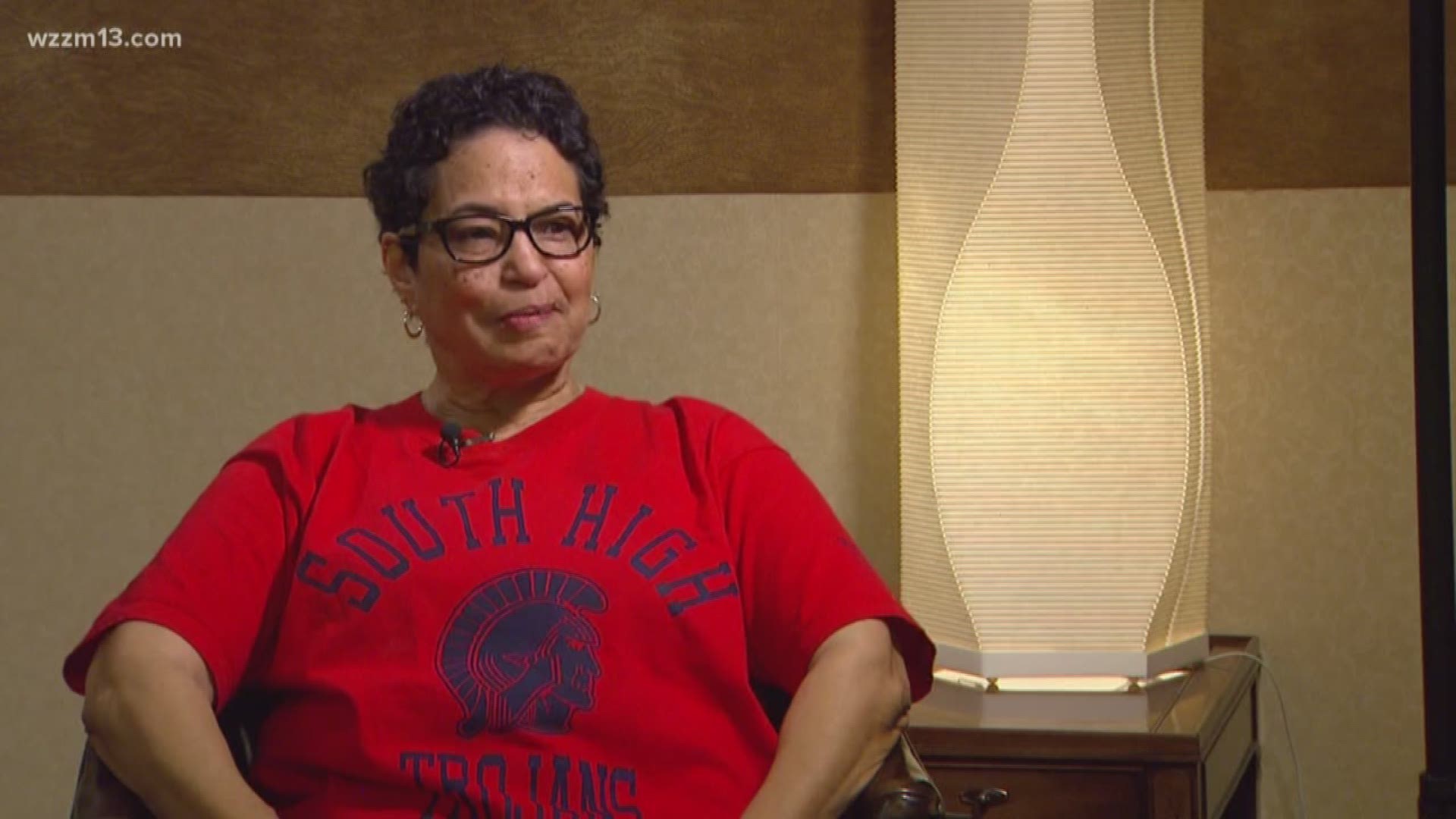 It's graduation season. High school students from all over are turning their tassels, signaling they've moved into their next phase of life.

While some people can't wait to be done with high school, others spend the rest of their lives reflecting back on the experience, and the friendships that were forged.

Alumni from a former West Michigan high school refuse to let their school spirit fade, even though their school itself faded away fifty years ago.

That school was Grand Rapids South High School, which opened its doors in 1917 and closed it's doors amidst extreme controversy at the end of the 1968 school year.

"It was a neighborhood school so nobody needed to be bussed," said Melvin Atkins, '68 South High graduate who is the current Executive Director of Community & Student Affairs for Grand Rapids Public Schools. "It was a blow when we lost our school and very emotional for all of us."

Other 1968 South High graduates remember the day they found out the school was closing.

"I thought, 'this can't happen,'" said Deborah Jones who was also a member of South High's class of '68. "That decision was devastating and immediately started to tear apart the community."

Gerald R. Ford graduated from Grand Rapids South High School in 1931. He served as the 38th President of the United States from&nbsp;August 1974 to January 1977.

The school housed 7th through 12th graders, and became the only building students knew for the second half of their formative education years.

The school closed as a high school for integration in 1968, but continued as a junior high until it closed for good 1981.

"We had received a court order, and the courts found [South High] guilty of lack of integration of our staff," said Atkins. "We had to start sending teachers of color to different schools around the city.

"The integration attempt was all one way. The only school that closed was South and that school had the most minority students."

Credit: WZZM
The last class to graduate from Grand Rapids South High School was the class of 1968. They&#39;d later include what would have been South&#39;s class of 1969 in every one of their class reunions, and still do that to this day.

"I remember that none of us smiled in our class of '68 class photo," added Jones. "Many friendships were severed because of this decision.

"It was especially awful for the class of 1969 because they had to leave the building they'd been in for 6 years and go to a completely different school for their senior year."

Even though the decision to integrate 50 years ago broke South High School apart, and it broke many of the students' spirit, that spirit never completely faded.

In fact, it's gained momentum through the decades and has come back bigger and better than ever.

"There's a comradery that we have that's been instilled in us from the day we entered that school," said Jones. "That's why whenever we have our 1968 class reunions, we've always included the class of 1969 because they should have been able to graduate from South."

Credit: WZZM
Al Gamble graduated from Grand Rapids South High School in 1959. He admittedly left his high school days behind until 1968 when the school closed. Since then, he&#39;s made it his mission to collect as much authentic&nbsp;South memorabilia as possible.

Al Gamble was a member of South High's class of 1959, but was impacted greatly by the decision 9 years later to close his alma-mater.

"I had lost a lot of interest in South in the years after I graduated, but when I heard it was closing, I reconnected again," said Gamble.

His South High spirit turned into a lifetime of collecting as much authentic South High memorabilia as he can find.

Gamble's collection is comprehensive and one-of-a-kind.

"I'm very proud of it," said Gamble. "I am hoping to find a place for this collection so that it will last forever."

The last Tuesday of every month is special for all South High alums. It doesn't matter which year they graduated from South, they're all invited to 'Marge's Donut Den' in Wyoming, Michigan to congregate and converse over pastries and coffee.

Credit: WZZM
On the last Tuesday of every month, South High alums are invited to &#39;Marge&#39;s Donut Den&#39; in Wyoming, Mi. to reminisce about their days at South. The event is called, &quot;South High Day at the Den.&quot; Marge Wilson graduated from South in 1957.

It's called the "South High Day at the Den."

Close to 100 South High alums turn out to the gathering each month. Marge, who was a 1957 graduate of South High, has almost all of the South High yearbooks, too, and she makes them available for alums to select and sift through.

One of the regular attendees at Marge's is legendary South High School varsity basketball coach Mike Murphy who is 98 years old.

Some former South High students never got over not being able to graduate from South High School. Monique Timmer-Ciofu was supposed to be a member of South's class of 1969, but when the school closed in 1968, she ended up going to Grand Rapids Union High School for her senior year.

Credit: Tim Bieber
Monique Timmer-Ciofu is a member of South&#39;s &#39;Lost class of 1969.&#39; When South High closed, she ended up graduating from Union High School. Monique&#39;s heart was always at South, evidenced by her class ring that she never got re-engraved.

Her senior class ring reads, "South High School 1969" and she never got a new one or ever thought to get it re-engraved.

"In my heart, I graduated from South," said Timmer-Ciofu.

Qyla Williams was just a sophomore at South when the high school closed, but she says her experience there has been ingrained into her forever. Like Timmer-Ciofu, Williams was bussed to Union High School for the 1968-69 school year.

"If I had graduated from South High, it would have been 1971," said Williams. "That's where I really wanted to graduate from."

Credit: WZZM
Qyla Williams was just a sophomore when Grand Rapids South High School closed in 1968. Even though she spent her final two years at Union High School, she always wanted to be a member of South&#39;s class of 1971, so she embroidered it on her sleeve.

On her South High polo shirt, Williams had a '71 embroidered onto the sleeve.

"I wanted '71 put on mine because South is where my heart and soul still is," said Williams.

Credit: WZZM
Even though Qyla Williams&nbsp;spent her final two years at Grand Rapids Union High School, she always wanted to be a member of South&#39;s class of 1971. For nearly 50 years, that&#39;s what she&#39;s believed in her heart.

The spirit of South High didn't start after the school closed in 1968. It actually began in 1943, during World War II.

"An 8th grader at South made the suggestion, 'why don't we by a bomber for the military for the war'," said James Atkinson, who was a 1958 graduate of South High and is the current president of the South High Varsity Club. "Within three months, the students raised $350,000 (which is equivalent to $5 million today) in war bonds, and bought a B-17 bomber."

Credit: Sandra Warren
In 1943, an 8th grader at South High School suggested the student body generate funds to buy a B-17 bomber to help in the war. Over three months, the students raised $350,000. The plane was purchased and named, &#39;The Spirit of South High.&#39;

The aircraft was named 'The Spirit of South High.' It was brought to the Grand Rapids Airport on Madison Avenue for a christening, then flew off on April 6, 1943.

The aircraft was responsible for training more than 2,000 military personnel, despite never having actually been in the war. It reportedly was lost during a training mission in Virginia.

"The spirit within the students of South High existed long before our time at the school, but we knew about it when we got there and wanted to carry on that tradition," added Atkinson. "That's why when the school closed, it was so crushing for many of us."

Credit: Sandra Warren
1962 Grand Rapids South High graduate Sandra Warren wrote a book about the B-17 purchase. It&#39;s entitled, &#39;We Bought a WWII Bomber.&#39; The book details how Soth High students raised the funds, and changed the course of history.

Sandra Warren, who graduated from South High in 1962, wrote a book about the B-17 bomber, entitled, 'We Bought a WWII Bomber.'

The best indication that the spirit of Grand Rapids South High School will likely continue well after all of the living alums are gone is the scholarship fund that was set up through the Grand Rapids Community College Foundation.

"Every year, two students from the Grand Rapids Public School district are selected to receive the South High Alumni Scholarship Fund," said Atkinson. "The two students get their tuition to GRCC completely paid for thanks to this fund."

Credit: WZZM
The &#39;Spirit of South High&#39; will live forever through the South High Alumni Scholarship Fund which was set up through the Grand Rapids Community College Foundation in 1997. Two GRPS students each year receive full-ride&nbsp;tuition thanks to the fund.

Since 1997, when the scholarship fund was created, 42 students from Grand Rapids Public Schools have been able to further their education thanks to this fund.

"The endowment has done so well that we have contacted the Gerald R. Ford Job Corps Center and will be paying for one student a year from there," said Atkinson. "The Job Corps Center is inside the building where South High School used to be.

Credit: WZZM
The endowment for the South High Alumni Scholarship Fund has grown so well that a 3rd student will soon benefit&nbsp;from it with full-ride college tuition. That student will come from the Gerald R. Ford Job Corps Center, which is the old South building.

"South High is still teaching, and that makes all of us alums feel proud."

Eventually, there will be no living South High graduates. That's why this group is doing all it can to ensure the memory of South High will never be forgotten.

"When the South Varsity Club started, we had a roster of over 300 alums," said Atkinson. "That number has been trimmed down to around 180 members because we're losing 10 members each year.

"We want the spirit of South High to live on forever and it can do that through the scholarship fund."

If you're a Grand Rapids South High alum and would like to reconnect with your classmates and rekindle that school spirit, you're asked to email Frank Russo (South High class of 1966) so he can add you to his email database.

Grand Rapids South High School also has a Facebook page where you can comment and connect with classmates. The page has nearly 800 members. Just click to join and one of the administrators will add you.

If you know of a story that would make for a good feature on "Our Michigan Life," send a detailed email to 13 On Your Side's Brent Ashcroft at life@wzzm13.com.