Jason Lynch lost his wife to cancer. William DeYonker has autism. Both have used life's challenges to become two of the best bank-shot artists in the world. 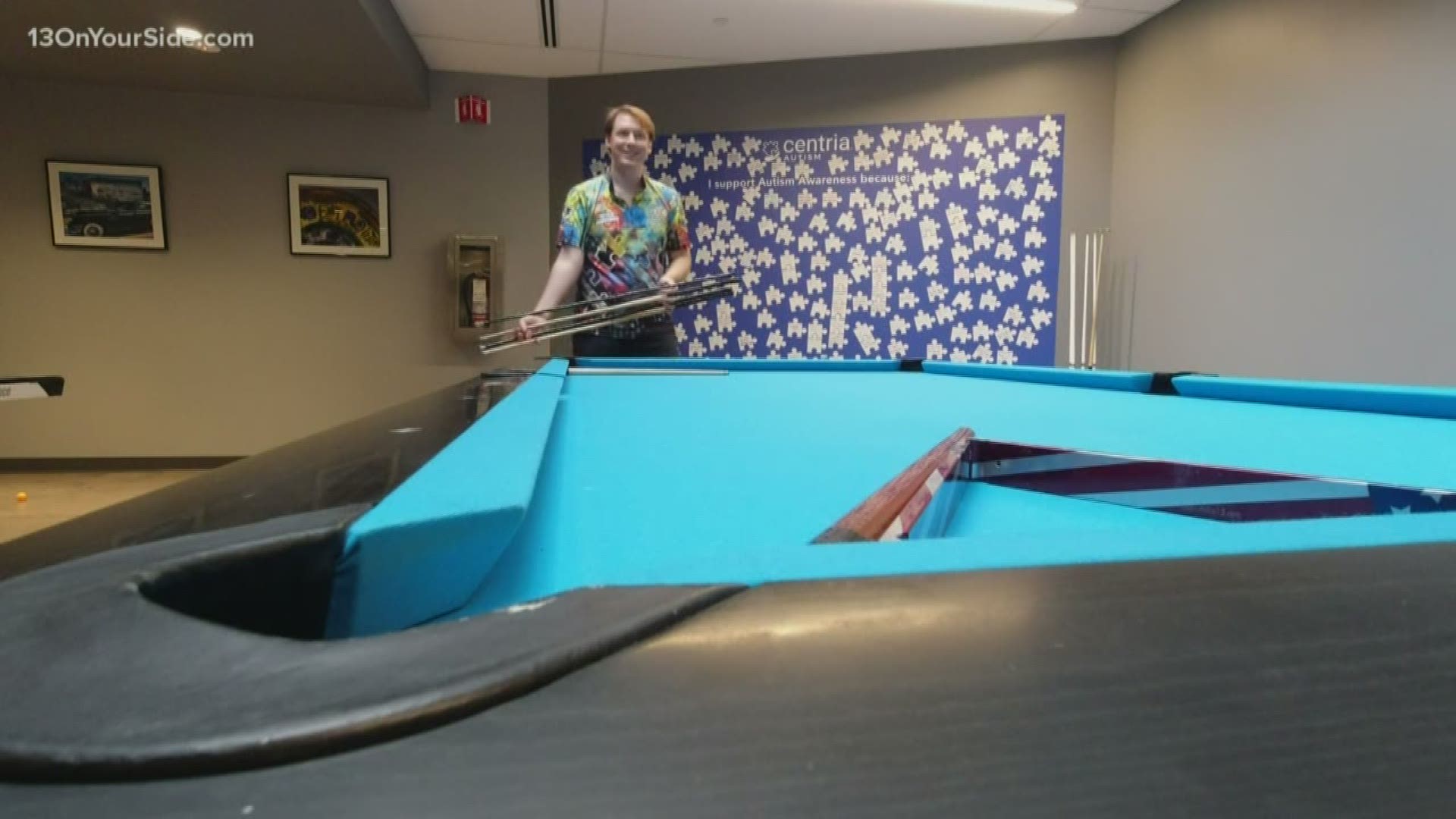 BAY CITY, Mich. — Billiard sports have a long and rich history that's been around since the 15th century. There are many different types: Carom billiards, Snooker, English billiards and Russian Pyramid.

The most widely known, and perhaps the most played, is Pool, which is generally played on six-pocket tables seven to nine feet in length. Eight-Ball and Nine-Ball are the most common games.

Two pool players from Michigan have taken this ancient sport, added some modern day flair to it, and combined with endless dedication, they've become two of the best trick-shot artists in the world.

"I started playing pool when I was six years old," said Bay City native Jason Lynch, who is currently the #2 ranked Artistic Pool player in the world. "I really fell in love with the game, primarily because it's never the same game twice."

'The Michigan Kid,' as he's affectionately known, says his interest in learning how to perform and perfect trick-shots started in 2004.

Credit: WZZM
Since he started competing in Artistic Pool tournaments around the world, Jason Lynch has many awards resulting from his talent.

"When it's an art form, you can share it with the people," said Lynch. "It's kind of like being a member of the Harlem Globetrotters of pool."

There are thousands of different trick-shots in Artistic Pool. Lynch says he can do at least 500 of them, and adds that he's even invented a few.

"We often create new trick-shots when we miss old ones," said Lynch. "Speed jump shots have always been something I love doing." 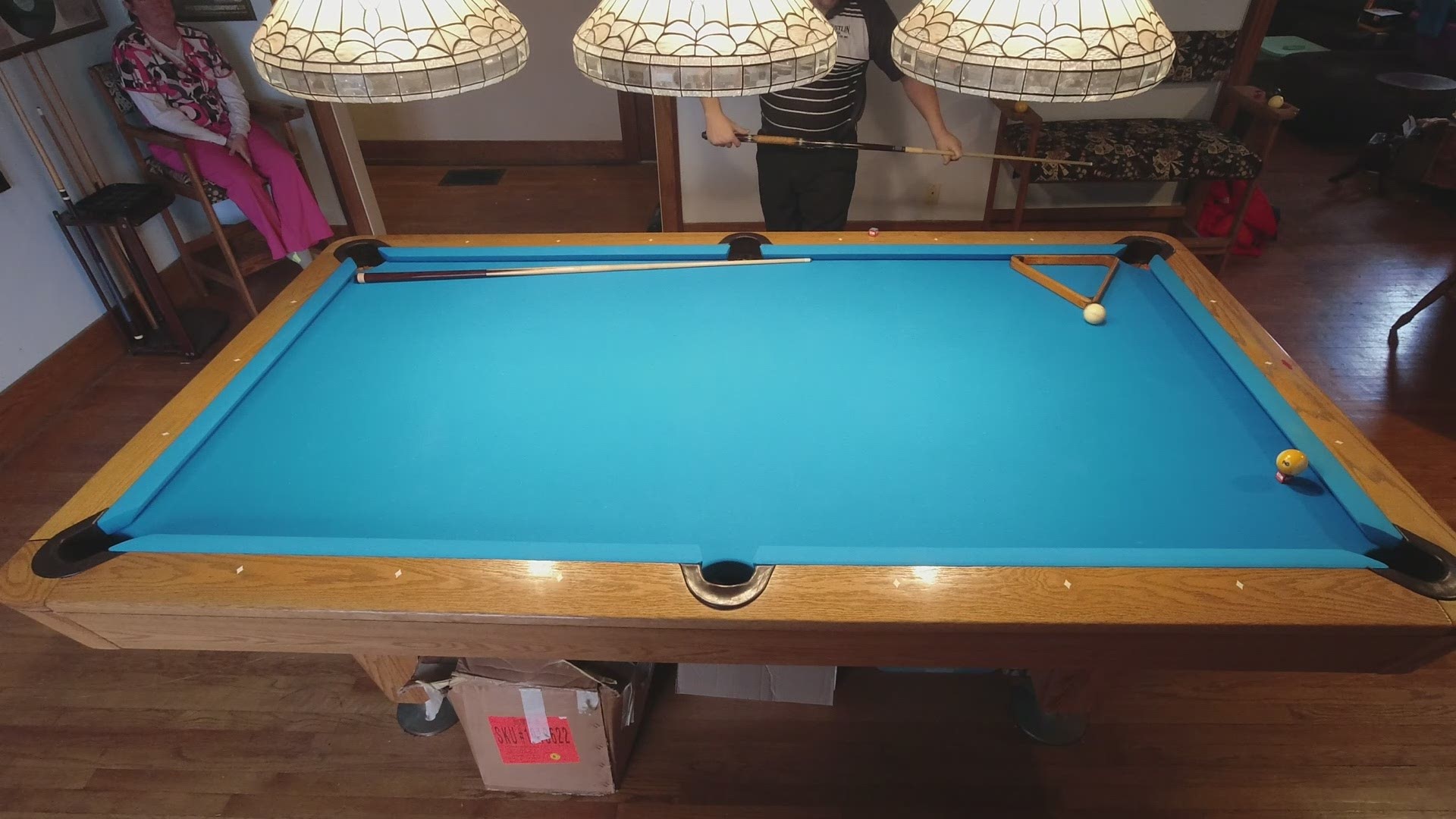 There are eight disciplines in artistic pool. Lynch has become a master at all of them. The key to his success could be in a stack of binders he has at his house.

"I have notebooks all the way back from every World Championship I've ever shot in," Lynch said. "Before I head off to tournaments, I find out what tables we will be competing on and cross-reference those in my books."

Lynch literally has broken down every pool table in existence, how the balls react on each and the power he'll need with the stroke of the cue to be successful.

"You might have a Diamond table one year then a Brunswick table the next," added Lynch. "Different adjustments are required for each table."

Credit: WZZM
Jason Lynch prepares for every Artistic Pool tournament by first learning which brand of table hell be shooting on. Then he does some reaearch.

Lynch spent nine years traveling all over the world competing in Artistic Pool tournaments, climbing in the standings and making a name for himself on the circuit as one of the best around.

But his world was rocked in 2013, causing his trick-shot career to be put on hold.

Credit: Jason Lynch
Jason Lynch was quickly becoming one of the best trick-shot billiards players in the world until his wife's death in 2013.

"I lost my wife to cancer," Lynch said. "After that, I lost myself for a long time."

Lynch says he dabbled in tournament participation after DeLynn's passing but "was just going through the motions for a number of years."

He says he didn't really get back into the game, so to speak, until 2019 when he was competing in the U.S. Open in Ohio.

"I brought my girlfriend, Kira, with me to that tournament," said Lynch. "I ended up taking second place and shot the best artistic pool of my life.

"When we got home she said, 'We need to talk! Clearly this is what you're supposed to be doing so that's what you're going to do."

"For the Record" trick-shot

1 / 2
WZZM
Jason Lynch has created several trick-shots in Artistic Pool, including one he calls, "For the Record," which involves two vintage vinyl records.

Lynch will be taking his #2 world ranking into the Pool World Championships which are taking place in Parkersburg, West Virginia, February 21-23, where he has his sights set on becoming #1.

"One of the hardest players for me to play against is Abram Diaz who's ranked number one," said Lynch. "If he falters and doesn't make the top four, and I win the tournament, I might get ahead of him."

Credit: WZZM
William DeYonker from Livonia, Mi., became the #1 ranked Artistic Pool player in the world in the fall of 2016. He held that ranking until Nov. 2019.

Before Diaz became the #1 in the world in November 2019, William DeYonker, who happens to also live in Michigan, held the top spot for three straight years.

"I have always had a fascination with rolling objects," said DeYonker, who resides in Livonia. "It's always been very mesmerizing to me."

DeYonker started doing trick-shots when he was 10 years old, then started getting serious about it when he turned 14. He says he'd practice 40 hours each week.

"I taught myself," said DeYonker. "I'm now one of the people who has mastered it."

DeYonker was diagnosed with autism at age four. In many ways, he says his discovery and love for pool at an early age helped him deal with the disorder.

In fact, he believes it's fair to say a direct line can be drawn between his autism and his success in Artistic Pool.

"With my autism, I am [not only] able to perform the shots, I'm able to see a 3-D map in my head of how the trick-shot's going to go," said DeYonker, who works in marketing at Centria Healthcare, which is a leader nationally in ABA therapy and support for autism.

Since DeYonker began competing professionally in 2013, he has won Masters Championships, appeared on ESPN's Trick-Shot Magic and traveled to China for the world championships. He started competing in ranked tournaments in 2014. Two years later, he'd elevated to #1 in the world. 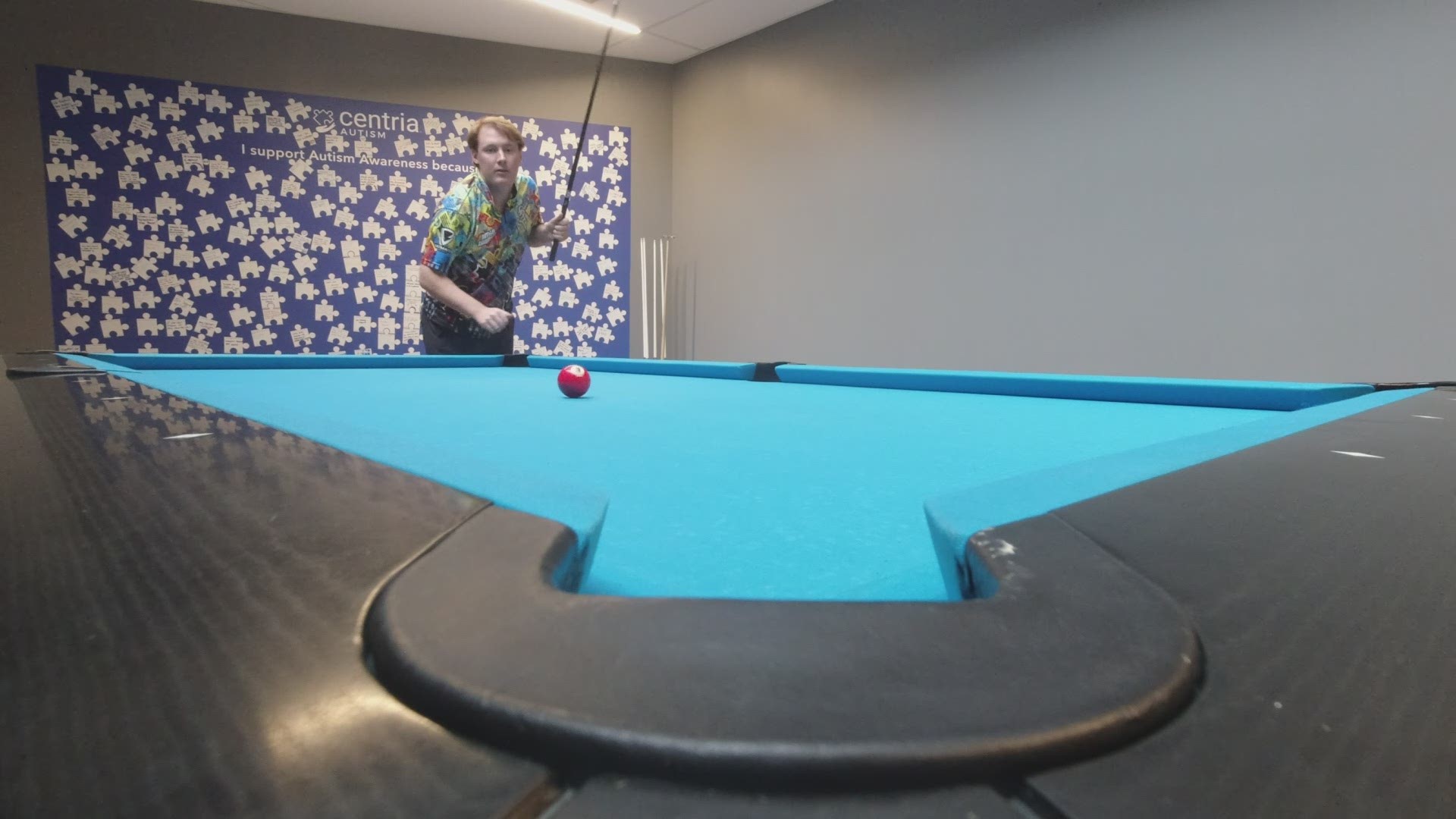 "When I was in school, I got almost all A's in geometry," said DeYonker, who is known as 'The Gentleman' in the professional pool community. "Figuring out angles, combined with how much velocity you stroke the cue, are critical in being successful at Artistic Pool."

Much like Jason Lynch, DeYonker has created several of his own trick-shots. He, too, has binders full of pool table diagrams that he uses as his guides before competing in tournaments.

Credit: WZZM
William DeYonker is so into billiards that he wears socks with pool balls on them.

DeYonker says he's moving away from competing in Artistic Pool and will start focusing more on regular pool.

"I want to still do trick-shot shows for people, but my goal now is to become the 8-Ball and 9-Ball world champion," said DeYonker. "I also see myself traveling the world, not just for playing pool, but also speaking and sharing my life story growing up with autism and show that individuals who have it also have potential in the world."

While Michigan may be known as the home to some of the most famous college and professional sports teams in the country, it's also home to a pair of artistic billiards players who, despite taking very different paths, have climbed all the way to the top of the pantheon of pool.

"If you believe you can do something, and you can visualize it, a lot of times it'll happen," said Lynch.

"It's become second nature to me," said DeYonker.

If you know of a story that should be featured on "Our Michigan Life," please send a detailed email to 13 On Your Side's Brent Ashcroft: life@13onyourside.com. You can also follow Brent on Twitter and Instagram.