From her apartment balcony, Phyllis Deiters attends her daughter's wedding, which was moved to the courtyard inside her assisted living facility, due to COVID-19. 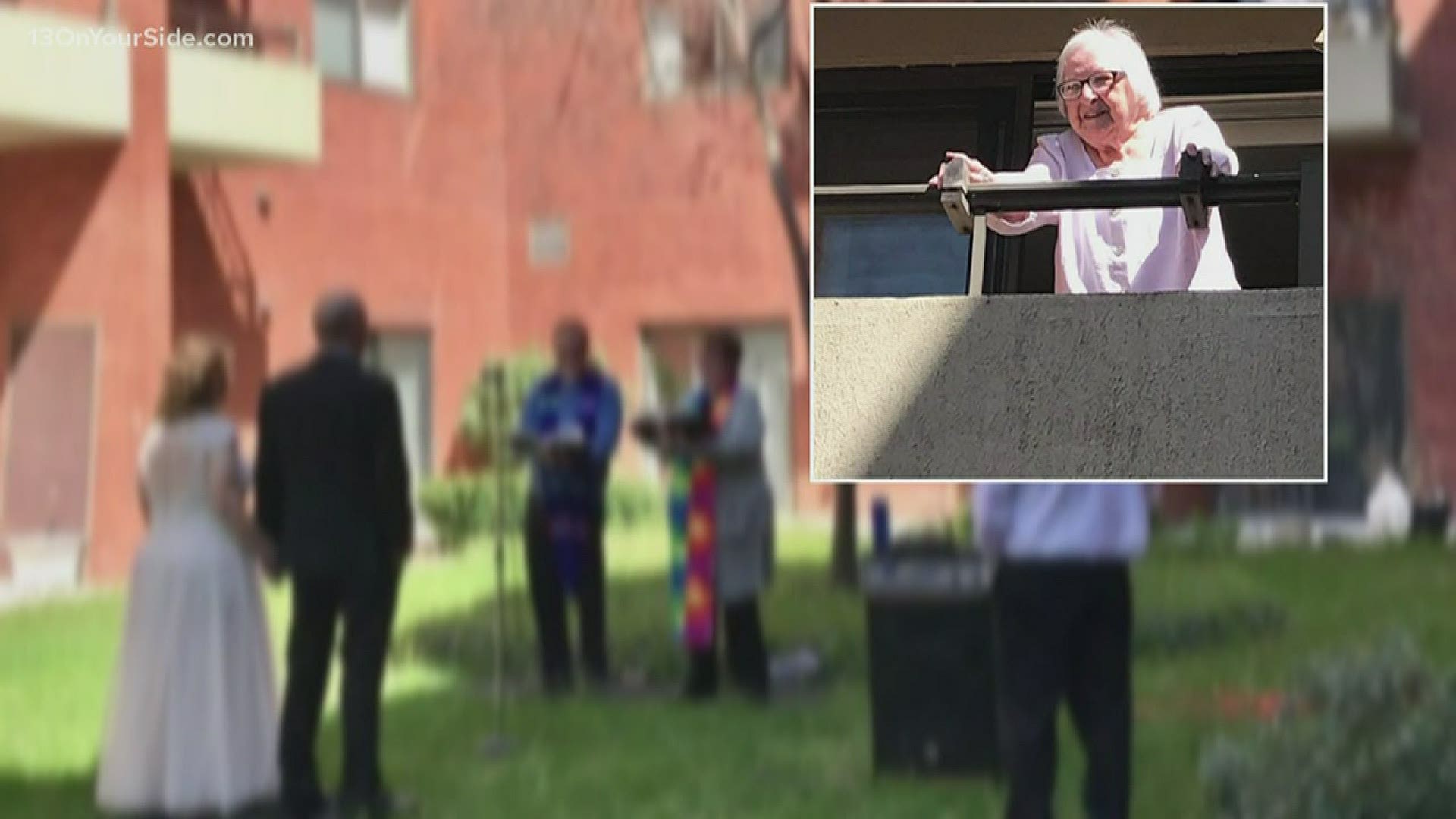 GRAND RAPIDS, Mich. — It's pretty much unheard of for a bride and groom to be the guests at their own wedding, but that's exactly what an engaged couple from Grand Rapids recently chose to be.

If they hadn't made that decision, a very important person who ended up being the host, wouldn't have been able to attend, due to COVID-19.

Credit: Lisa Green
Mark and Lisa Green got married April 26, 2020. Not even a pandemic could prevent Lisa's mother, Phyllis Deiters, from seeing it from a 'balcony seat.

Lisa Deiters and Mark Green started dating in March of 2018, then got engaged in November 2019.

After the new year started, the couple was making plans and preparations for their big day. Everything was falling into place until mid-March when the COVID-19 pandemic came to Michigan.

"We really didn't think we were going to be able to get married this year at all," said Mark. "We weren't sure if we could even get a marriage license during this COVID thing."

After Gov. Gretchen Whitmer enforced the Shelter in Place Order, everything closed and people had to social distance.

Lisa and Mark were quickly accepting the reality that their nuptials would have to be put on hold, and they were fine with that since it was imperative that Lisa's 91-year-old mother, Phyllis Deiters, be in attendance.

"This is my first marriage," said Lisa. "For her age, my mom is in great health, so I couldn't imagine getting married and her not being there."

Phyllis Deiters resides at Samaritas Senior Living, which is an assisted living facility in Grand Rapids. She has an apartment with a balcony that overlooks a small courtyard.

Because of the pandemic, Phyllis can't leave the facility, so her ability to attend her daughter's wedding would have been impossible.

Considering all the variables, Lisa came up with an idea.

"I emailed Samaritas and said, 'Hey, could we [have the wedding in the courtyard], and [Phyllis] could [go out on her balcony] and overlook?'", said Lisa. "They said, 'Yea, that would work.'"

Credit: Lisa Green
From the apartment balcony of her assisted living center, Phyllis Deiters was able to attend her daughter's wedding, happening down below her.

COVID-19, or no COVID-19, this wedding was not going to be denied, and neither was Phyllis' presence.

"When she told me her idea, I said, 'Unbelievable,'" said Phyllis. "I couldn't believe it went that way and that they were able to still include me." 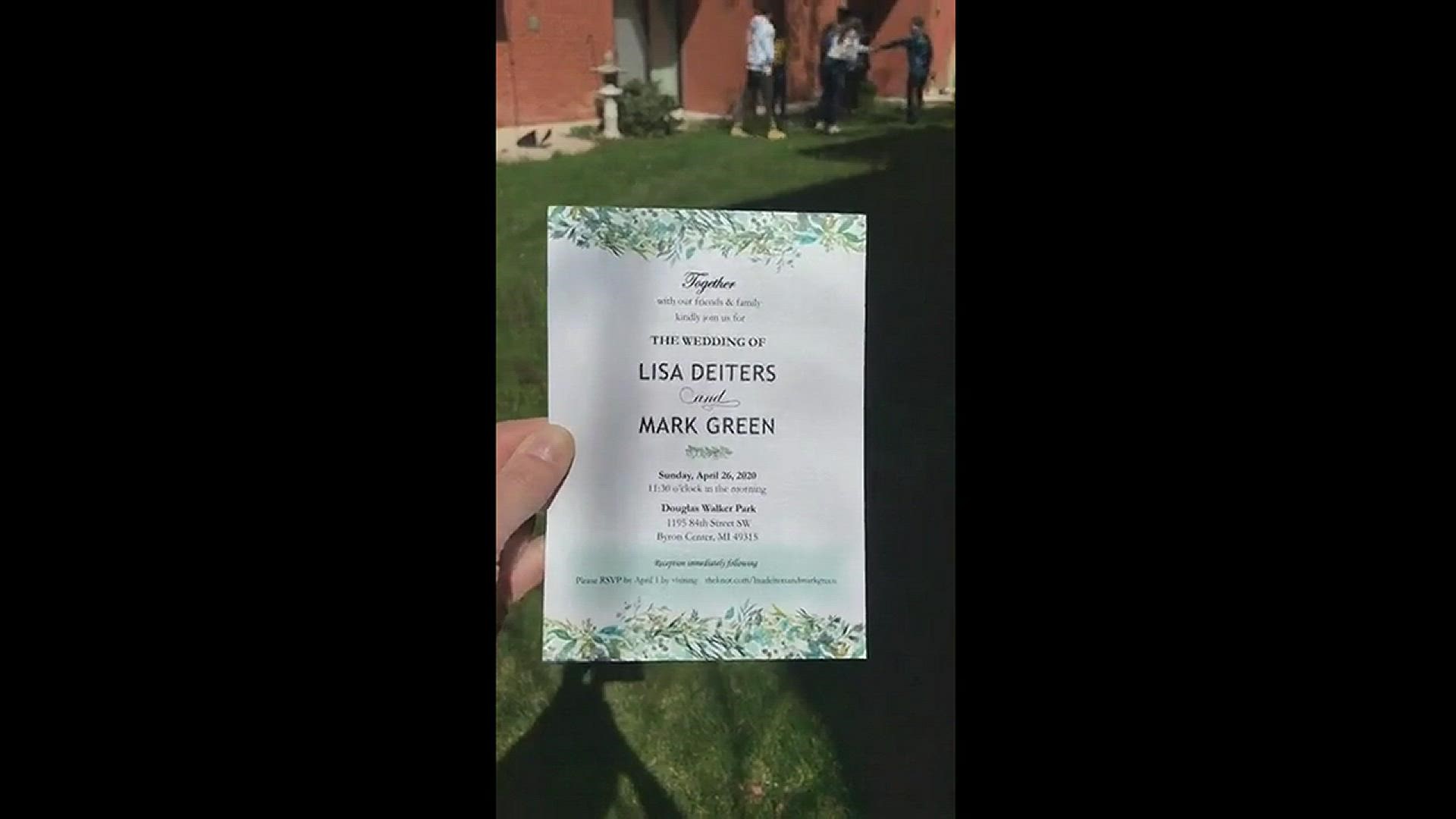 Mark and Lisa wound up getting their marriage license approved, so on the morning of April 26th, a small grouping of their friends and family entered the courtyard, making sure social distancing was being respected.

Two ministers and a wedding photographer were also among the attendees.

Phyllis walked out onto her balcony and watched the wedding unfold beneath her.

"It was just beautiful," Phyllis said. "To be able to stand there and see all of it and all the people from my right-side seat, was so great."

Phyllis sprinkled lavender from her balcony, onto the newlyweds, for good luck

1 / 3
Lisa Green
Social distancing being respected, Phyllis Deiters calls the newlyweds under her balcony to congratulate them.

After the ceremony ended, and the couple became Mr. and Mrs. Mark Green, Phyllis called the newlyweds to come under her balcony because she wanted to congratulate them.

Phyllis pulled out a pouch of lavender and sprinkled it down on both Lisa and Mark.

The moral of Mark and Lisa's wedding story is that plans may change but visions don't. The couple remained steadfast on having their wedding happen on the date they selected, and found a unique way to make sure the most important attendee could see it happen.

"It was super important to have [Phyllis] with a front row seat," added Mark.

Lisa said, "We will remember it for sure."

As for Phyllis, "That was the best day of my life," she said. "It was just great."

Credit: Lisa Green
Mark and Lisa Green were married Sunday, April 26 at Samaritas Senior Living in Grand Rapids, so Lisa's mother could be in attendance.

Mark and Lisa say they plan to have a huge reception sometime after the COVID-19 pandemic has passed, and people are allowed to gather again.

Phyllis won't be on her balcony for the reception; she plans to attend just like everybody else.

"I'll be wearing the mother-of-the-bride's dress [to the reception] because I couldn't wear it during the wedding," said Phyllis.