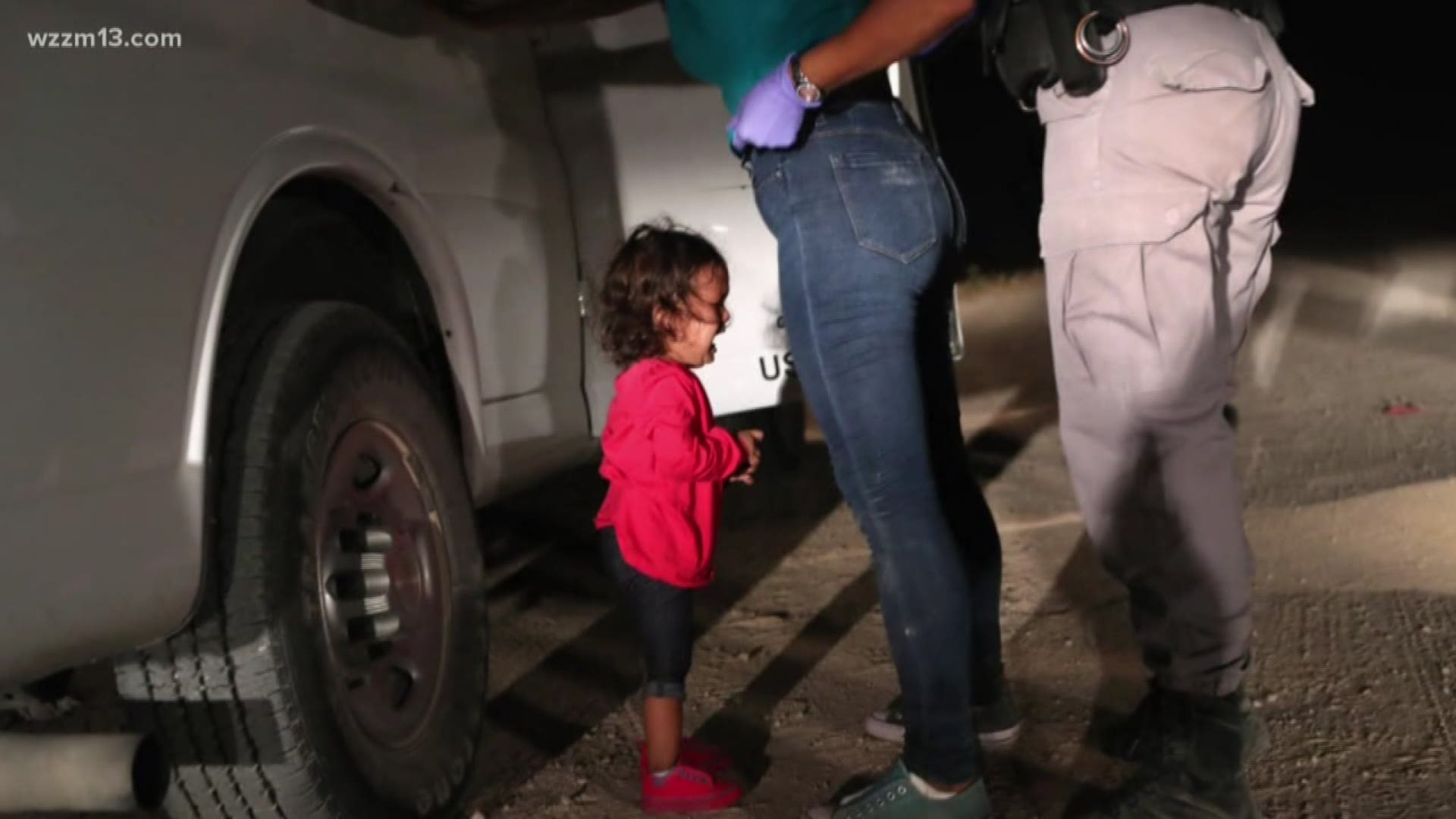 A humanitarian crisis has landed on the doorsteps of a west Michigan foster care agency, where volunteers are scrambling to meet the needs of dozens of immigrant children who have been separated from their parents.

Among the transplants are kids who ask for their mothers in Spanish — and babies and toddlers who can only cry about what's happening.

"These children are scared and the people who are caring for them need help," Ali Van Overbeke, 24, of Grand Rapids wrote in a Facebook post after learning about the children in a Free Press article earlier this month.

Her plea for help on social media produced results.

On Monday, Van Overbeke delivered a carload of donated goods — Spanish children's books, toys, diapers — to a refugee center in Grand Rapids run by Bethany Christian Services. She said that she called the center last week and learned from a volunteer that they were low on diapers and that she "had grabbed one of the last ones."

"I was just thinking of all the privilege I've had in this world. I was getting chills thinking about these children who are being ripped from their parents ... to all of a sudden be in Michigan?" said Van Overbeke, a college adviser at Michigan State University and former Americorps volunteer. "I just think that we can all make a change."

She stressed: "At 24, if I was pulled away from my parents, I don't know what I would do."

Van Overbeke's comments come in the wake of the new, zero-tolerance immigration policy under which almost 2,000 children have been separated from their families at the border over six weeks. The Trump administration has stressed that the policy is intended to deter people from breaking the law and entering the U.S. illegally.

Crossing the border is prosecuted as a crime, and when adults are detained, the minors accompanying them are taken away.

This forced separation of children from their parents has fueled days of intense criticism of President Donald Trump’s immigration policies. Both Democrats and some Republicans are calling for an end to the practice at the U.S.-Mexico border and citizen protests have been held in cities nationwide, including Detroit.

Amid the criticism, the president dug in Monday, blaming Democrats for the crisis. Trump tweeted: “Why don’t the Democrats give us the votes to fix the world’s worst immigration laws? Where is the outcry for the killings and crime being caused by gangs and thugs, including MS-13, coming into our country illegally?” Homeland Security Secretary Kirstjen Nielsen said officials will not apologize for enforcing immigration laws that result in the separation of child

The government's stance has created a public furor, with critics calling the policy inhumane and insensitive.

Among such critics is Bethany Christian Services, one of two Michigan foster care agencies that has contracts with the federal government and is licensed to handle refugee resettlement — in this case, find foster homes for immigrant children separated from their families.

The group has expressed that it is "deeply troubled and concerned" by the immigration policy and has criticized Attorney General Jeff Sessions for "citing scripture to justify the separation of families."

"Such policies create unnecessary trauma on the most vulnerable and most certainly will have devastating long-term effects," the group said in a recent statement. "Recent scriptural justification of such policies are insensitive. The separation of children from their parents and families is wrong."

Homeland Security Secretary Kirstjen Nielsen is rejecting criticism accusing her department of inhuman and immoral actions when it comes to separating immigrant children from their parents when they cross the U.S. border illegally. (June 18, via AP)

The other Michigan group that looks after unattended child immigrants is Samaritas, the largest refugee resettlement agency in Michigan and fourth largest in the country.

Samaritas, which currently has 123 refugee kids in foster care or group homes, has applied for permission to take 50 to 60 more kids in response to the latest zero-tolerance border policy.

"We're pretty much bracing for impact," said Michelle Haskell, an outreach team leader with Samaritas in Lansing who has already heard from a half dozen Michigan families offering to foster immigrant children separated from their families

"People are amazing," Haskell said. "We’ve had a lot of people just shoot us a call and email and ask, 'Do you have these kids. Do you think you will? ... We think we can open up our home.' It’s been really encouraging."

Haskell said that typically, immigrant children who come to Michigan on their own stay in foster care for about 45 days, with the goal being to reunite them with family members already living in the U.S. That's the goal this time, too, she said, but noted that there's a new element: These kids aren't here on their own, but rather were separated from their parents who are now facing prosecution.

Samaritas president Vickie Thompson-Sandy said the organization's overall goal "is about keeping children with their parents."

"As a child welfare program, we ... try to prevent children from being removed from their parents and experiencing that trauma," Thompson-Sandy said. "Over the last several years, we’ve dramatically reduced the number of children we’ve separated from parents and ironically that has been at the urging of the federal government. And so it is somewhat ironic that we are responding to this crisis that is potentially being exacerbated because of the position of the federal government on this issue."

Under the new border policy, it's unclear where the newly detained children will wind up.

“What’s happening today with parents who are sent back to their home country and their children are detained — that’s a new phenomenon. I’m not 100% sure how those children will be reunified.”

According to Thompson-Sandy, if the government approves Samaritas' most recent applications, the organization will have nearly doubled the volume of refugees it has helped in one year's time — from 93 to 183. But this is not the first crisis at the border, she noted.

"It was probably about three years ago that the Office of Refugee Resettlement did the same exact thing and asked nonprofit organizations to step up and to take kids because there was a crisis at the border," she said. "And so this does happen periodically."

Thompson-Sandy highlights the federal government's passing of the Families First Act, which pledges to invest in families to prevent children from being removed from their parents.