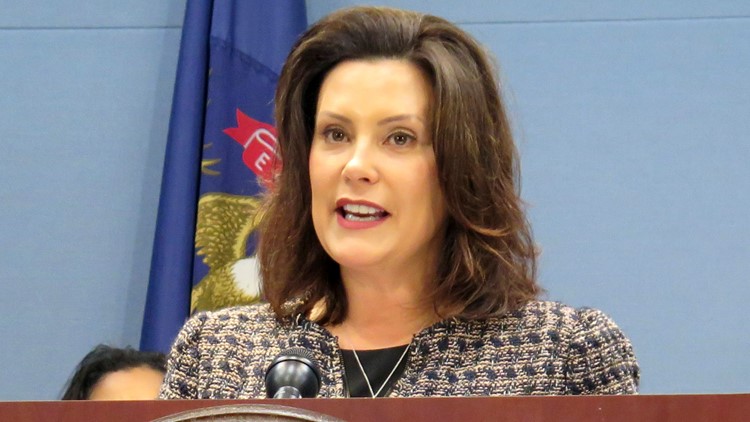 Photo by: AP
FILE - In this June 26, 2019 file photo, Michigan Gov. Gretchen Whitmer speaks about new lead testing rules for drinking water at the Romney Building in Lansing, Mich. Whitmer and Republican legislative leaders announced Monday, Sept. 9 that they will work to enact a state budget without including a long-term funding plan to fix Michigan’s deteriorating roads. The agreement should forestall the possibility of an Oct. 1 partial government shutdown. But it also strips the first-year governor of leverage as she seeks a nearly $2 billion influx of new spending on road and bridge construction in a state that ranks second to last nationally in per-capita road spending. (AP Photo/David Eggert, File)

The dispute is centered over how much to direct to roads and bridges in the coming fiscal year.
Author: Associated Press
Published: 9:52 PM EDT September 11, 2019
Updated: 8:32 AM EDT September 12, 2019

LANSING, Mich. — (AP) - Budget talks broke down Wednesday between Republican legislative leaders and Democratic Gov. Gretchen Whitmer on Wednesday, just days after they agreed to sideline negotiations over a long-term road-funding proposal to focus on passing a spending plan before an Oct. 1 deadline.

The dispute is centered over how much to direct to roads and bridges in the coming fiscal year after the sides previously could not reach consensus on a tax hike to permanently boost the transportation budget.

GOP lawmakers said House-Senate conference committees will start approving some spending bills Thursday despite Whitmer not being on board. It could set the stage for a veto showdown after Whitmer and Republican leaders said Monday their No. 1 priority was enacting a budget.

"Our sincere efforts to reach consensus on budget targets came to an abrupt end when my governor ended negotiations this afternoon," Republican Senate Majority Leader Mike Shirkey said in a written statement. "A negotiation must include parties that put forth genuine effort to compromise and reach consensus. We could not have predicted that our talks would break down over my governor wanting less money to fix the roads, but in the end, we could not accommodate her position."

Whitmer responded with her own statement.

"Republicans wasted two months by going on vacation this summer instead of staying in Lansing to negotiate. That's the only reason we don't have a budget right now," the governor said. "After months of inaction, the best plan they could come up with would steal money from other priorities and doesn't fix the roads."

GOP legislators said they want to direct $500 million in general funds to roads in the next fiscal year, above what already is required under 2015 laws that earmark income tax revenues for the transportation budget. They also plan to increase school funding by nearly $400 million, boosting base per-student aide by between $120 and $240, and to spend $120 million to protect drinking water.

Whitmer has opposed using general funds for roads because they traditionally are used to fund public universities, state departments and other government functions. She said the move has ultimately hurt K-12 funding, too.

"This status quo budgeting will only keep our roads the worst in the nation and our schools at the back of the pack. It's not a real solution," Whitmer said.

GOP House Appropriations Committee Chairman Shane Hernandez said Republicans are moving ahead because they want the government to stay open.

"She spent all summer demanding a $2.5 billion tax increase on Michigan drivers, but now she insists our new budget plan invest no additional money toward roads at all," Hernandez said in a statement, referencing Whitmer's proposed 45-cents-a-gallon fuel tax hike. "Her position doesn't make any sense."

"Our citizens expect government to function, and I remain committed to doing that despite continued Republican actions to the contrary," she said.