KALAMAZOO, Mich. — Amid a growing threat of Eastern Equine Encephalitis (EEE), state health officials announced Friday they will be conducting aerial spraying in 14 counties in areas where there is a concentration of EEE to combat the spread of the disease.

The Michigan Department of Health and Human Services said due to the large geographic spread of EEE and projected warm weather, they will be partnering with local health departments to conduct aerial spraying in areas of concern. It is scheduled to start Sunday, Sept. 29 at 8 p.m., but it is weather-dependent.

The aerial spraying will be in Allegan, Barry, Berrien, Branch, Calhoun, Cass, Jackson, Kalamazoo, Kent, Lapeer, Montcalm, Newaygo, St. Joseph and Van Buren. All of those counties have cases of EEE in people and/or animals. 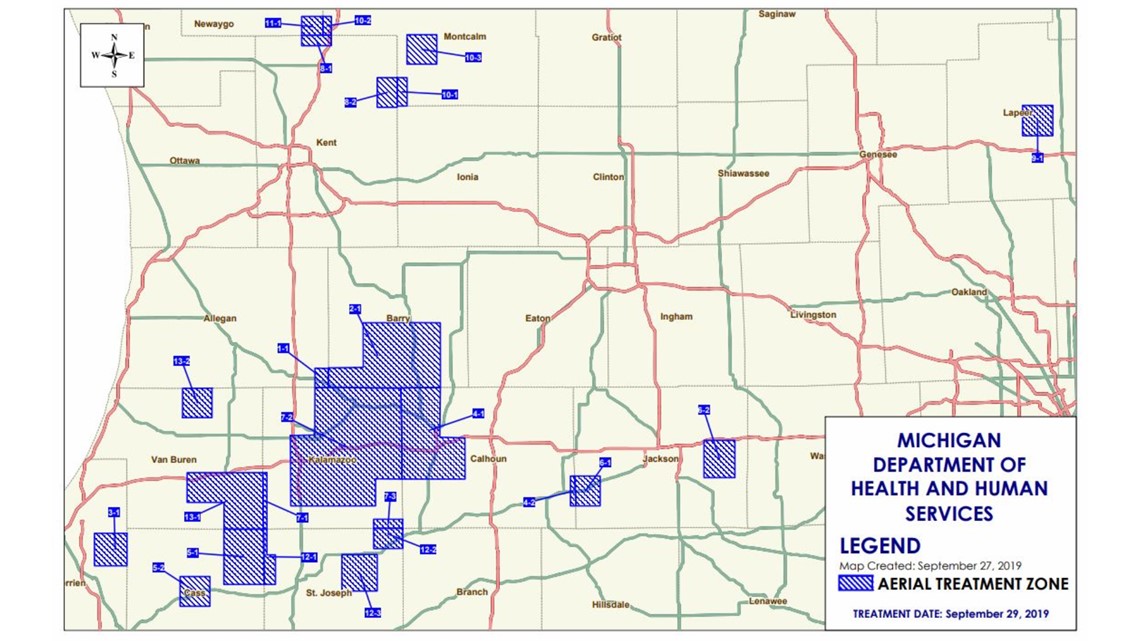 Allegan County has also included the southeast areas of Trowbridge Township and Gun Plain Township in the spraying.

This is the first time Michigan and local health departments will be conducting aerial spraying to combat EEE since 1980, according to the Associated Press. Although, communities have sprayed locally to fight outbreaks of the West Nile Virus.

To date, state health officials have confirmed nine cases of EEE in humans and 27 confirmed cases in animals across 14 counties. Three people have died from EEE.

RELATED: Protecting yourself and your pets against EEE

Kalamazoo County has the most incidences of the disease. There is an EEE vaccine available for horses, but not for people. Additional animal cases are under investigation.

The aerial spraying will be conducted with a twin engine plane flying about 300 feet above ground, starting in the early evening and continuing until 4:30 a.m. the next day. The pesticides are ultra-low volume, and those sprayers dispense fine aerosol droplets, smaller then the head of a pin, that stay suspended in the air and kill adult mosquitoes on contact.

The state says the pesticide being used is Merus 3.0, which organic and contains 5% pyrethrin, which is used to control mosquitoes, fleas, flies, moths and ants. Health risks are not expected during or after spraying, but residents with a sensitivity to pyrethrins are encouraged to stay indoors.

The spraying will take place during the night hours because it is when fish are less likely to be at the surface feeding and honeybees are most likely to be in their hives. The insecticide could be harmful to bees if they come in direct contact. But the state says, due to the low level of chemical being sprayed, the application is not expected to have an impact on bees. Beekeepers can reduce exposure by covering the hive with wet burlap.

State officials say owners should cover small fishponds. And it is not necessary to bring animals inside, but pet owners can do so during the spraying.

Aerial spraying is not expected to have any impacts on surface water or drinking water, according to MDHHS.

However, the Mayor of Kalamazoo, Bobby J. Hopewell said he doesn't support this. "[It] raises too many unanswered questions and concerns for me," he said.

Instead, he suggests a "more targeted" approach. He said the city will make sure drinking water is safe and infrastructure is protected.

Other states, including Massachusetts and Rhode Island, have recently employed this tactic to combat EEE.

“We are taking this step to help protect the health and safety of Michiganders in areas of the state that are being affected by this dangerous mosquito-borne disease,” said Dr. Joneigh Khaldun, MDHHS chief medical executive and chief deputy for health. “The continuing number of cases in both people and animals indicate an ongoing risk for EEE exposure. We continue to urge residents to protect themselves against mosquito bites until a hard frost.”

►Get more info about EEE here.

As the threat of EEE continues in West Michigan, health officials are urging evening events to be rescheduled. High schools are moving up outdoor sporting events, primarily football games, to avoid having them during evening hours.

The particular species of mosquitoes that can carry EEE are most active from dusk until dawn, 7 p.m. to 7 a.m.

What Ottawa County is doing to avoid EEE cases

In Ottawa County, there are no reported human or animal cases of EEE, according to the Department of Public Health. However, Allendale Public Schools rescheduled their high school football games Thursday and Friday against Cedar Springs due to a reported case in neighboring Kent County.

“Part of this was just being good partners with our competitors and saying, ‘We want to respect the fact that there is this concern in your area,’” Superintendent Dr. Garth Cooper said. “We just felt being proactive and keeping students, players and fans safe was the right decision to make."

While the county is not recommending postponing, rescheduling or canceling outdoor events, people or organizations can take those precautions, said Kristina Wieghmink, communications specialist for the Ottawa County Department of Public Health.

The last human case of EEE in Ottawa County was reported in 2002. There is no plan to spray preemptively, but the county is pushing awareness to prevent mosquito bites.

“Whether it’s EEE or West Nile Virus, people need to take preventative measures to stop mosquito bites by wearing that bug spray and watching the activities they do from dusk until dawn,” Wieghmink said.

MDHHS is advising Michigan residents to take precautions against mosquito bites. They offer this advice:

EEE has been confirmed in these counties: