What was once a gravel pit in Coldwater Township will soon become an inflatable aquatic playground, beach and outdoor recreational facility. 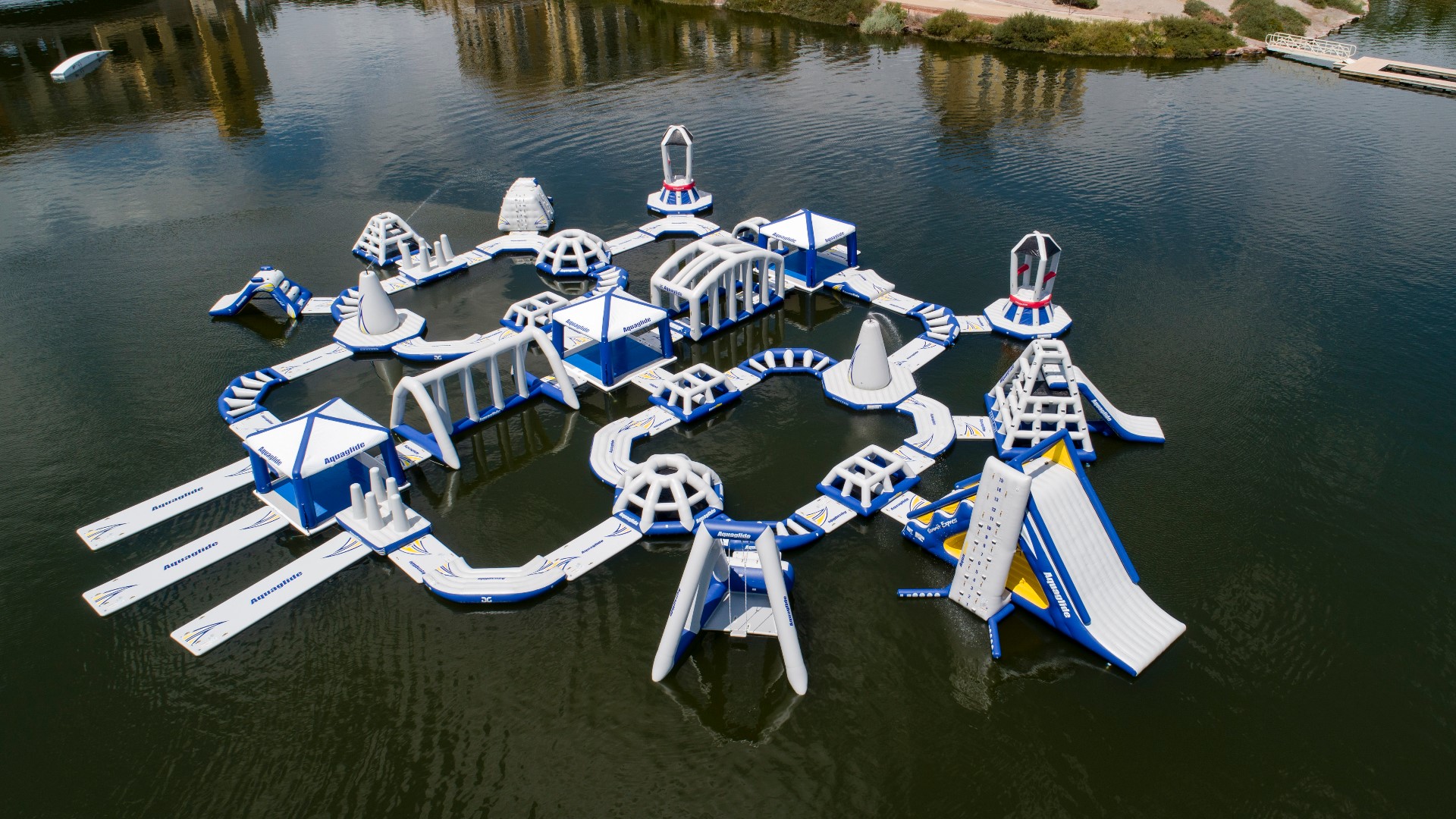 COLDWATER TOWNSHIP, Mich. - There are currently three inflatable aqua playgrounds in Michigan, but there soon will be a fourth.

Seth and Amber Berry, of Quincy, are finalizing the purchase of a 190-acre property where they expect to open The Aqua Pit in 2020.

The property used to be an old gravel pit located at 262 South Michigan Avenue in Coldwater Township.

The Berry's are working with Aquaglide, a company that specializes in aquaparks, inflatable kayaks, towables and stand-up paddleboards. The cost of an entire set of Aquaglide pieces can cost anywhere from $35,000 to $300,000.

"Basically what you do is you tell them how big your lake is -- we have 112 acres -- and you tell them about how many people you want it to hold," Amber Berry said. "We said about 125 people, and then they do a mock-up. They draw it out, and if you want to change things, you can tell them to add on or make it bigger."

Amber Berry said Seth was and always has been an avid water skier, and the original idea was to put in a cable wakeboard park. The couple talked about the idea when they lived in Tennessee, but after moving back to Michigan, the idea was still there.

However, Amber Berry said cable wakeboard parks can cost hundreds of thousands of dollars, they opted to try the aquapark.

Credit: Aquaglide / Battle Creek Enquirer
An aquatic playground, like this one at Velocity Island Cable Park in Woodland, Calif., is expected to open in Coldwater in 2020.

And the future is something the Berry's have their sights set on. Amber Berry said they hope to make it more than just an aquapark.

"We want to do a campground, and maybe even a nice restaurant and retail space," Amber Berry said. She hopes to have kayaking, cornhole, horseshoes and possibly food trucks when the venue opens.

On June 24, the Coldwater City Council passed a resolution that approved more than $237,600 from the city's revolving loan fund for the project. The fund is administered by the City of Coldwater, but the city is using federal money -- not local tax dollars.

City Manager Keith Baker said in the resolution that while the City of Coldwater controls the revolving loan fund program, projects that benefit Coldwater and the surrounding region do not have to be located in the Coldwater city limits to be considered eligible for funding.

"Because the last loan of money was two years ago, if you don't keep the funds current, the funds could be recaptured by the state," Baker said. "This project allows us to keep the funds local and continues to qualify us for the remainder of the loan fund, which is $350,000 for other projects."

The agreement also states that the business must hire seven full-time staff members who work 35 or more hours per week with all created positions carrying the title, "Aqua Guide/operator." The Berry's expect to have 10 to 12 employees when The Aqua Pit opens.

The property is currently owned by Lee Brayton, father of former race car driver Scott Brayton, who was killed after qualifying for the pole position in the 1996 Indianapolis 500. Amber Berry said Lee Brayton has been amazing to work with to get the park approved.

"He's the one we're making the purchase with, and he said that's kind of what he wanted the property to do -- to reach a lot of people," Berry said. "It was so devastating when his son passed."

The Berry's will rename it Lake Brayton in honor of the family.

The park will be open from Memorial Day to Labor Day each year, but Amber Berry said it could be open earlier or later depending on the weather. Life jackets will be mandatory to use the inflatable structures.

Baker said this is a unique destination for both Michigan and Branch County which is a positive from an economic development standpoint.

"It's just one more destination for our community to offer," Baker said. "We're in a county of over 100 lakes, but we only have one public beach. There's not a lot of public access to the lakes, and this will provide a means for water access and water activities."

For more information, visit The Aqua Pit on Facebook.