"Everybody seems to understand but the Catholic Church," said Jeff Hullibarger, father of 18-year-old Maison. The priest told mourners at the funeral that the youth might be blocked from heaven because of how he died, the couple said. 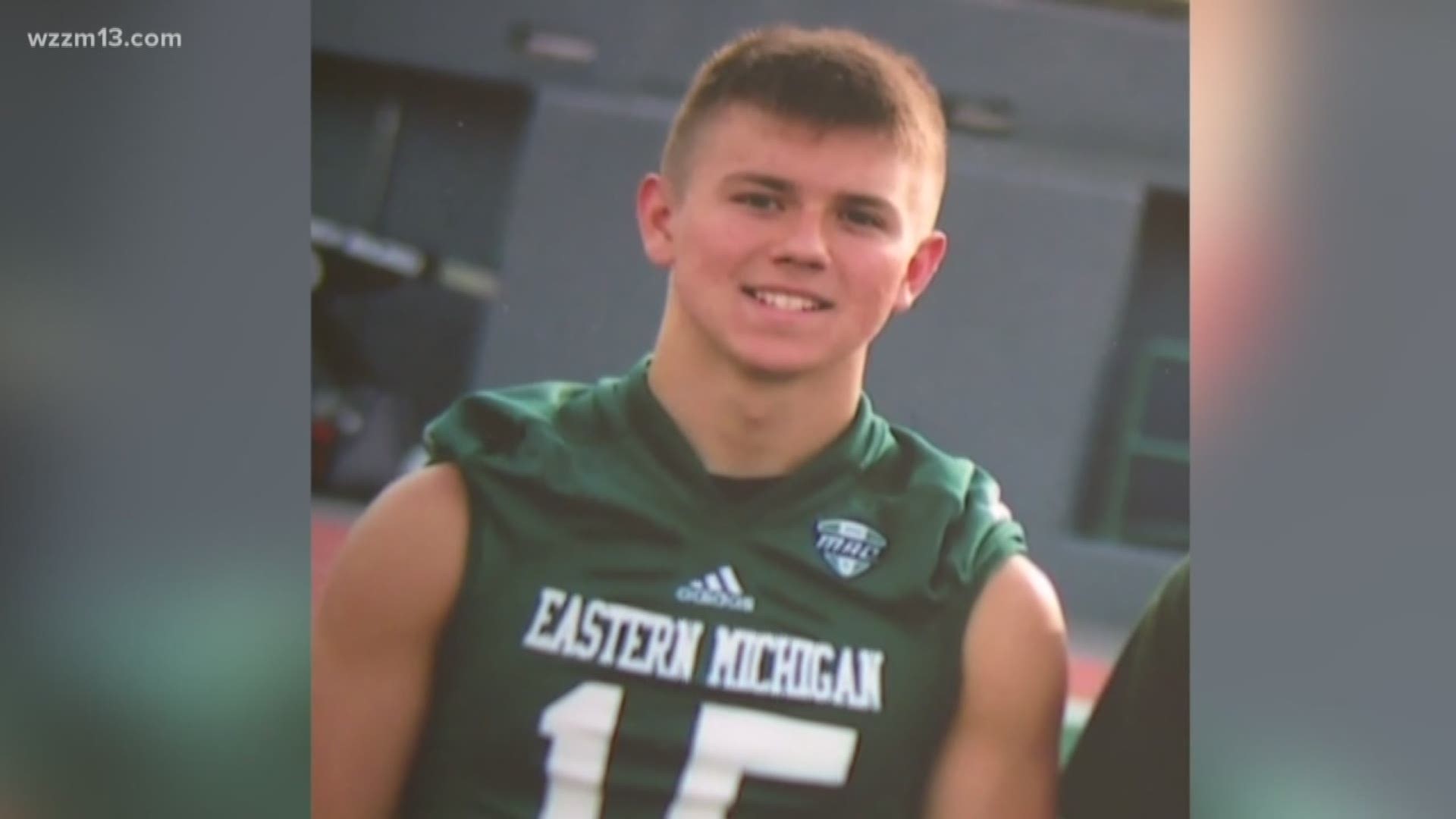 They lost a teenage son to suicide, then sought compassion from their priest.

Yet, at the packed funeral on Dec. 8, the Rev. Don LaCuesta delivered words so hurtful that Catholic officials in Detroit apologized in a statement emailed to the Free Press.

Not good enough, the youth's parents said. They want their parish priest removed from his post in Monroe County, south of Detroit.

"Everybody seems to understand but the Catholic Church," said Jeff Hullibarger, father of 18-year-old Maison, a straight-A student and outstanding athlete who ended his own life on Dec. 4. The priest told mourners at the funeral that the youth might be blocked from heaven because of how he died, the couple said.

Adding to the family's hurt was the appearance of their late son's high school football coach, who'd bullied him and their other sons, they said. Although Maison's mother, Linda Hullibarger, said she requested through a friend that coach Jeffrey Wood not attend the funeral, Wood showed up anyway, then was asked to leave.

He did so, only to post on social media a sneer at the family's tragedy. That act got the award-winning coach, with a record of 77-38, relieved of his duties by the school district's superintendent, according to a statement posted on the website of Bedford Community Schools.

Still, the Hullibargers said the rude incident with the coach pales beside the spate of jarring words they heard from their parish priest.

Jeff Hullibarger and his wife, Linda Hullibarger, who live in Temperance, Michigan, said they had met with Father LaCuesta well before the funeral, going over in detail what they expected in the homily to be delivered by their pastor at Our Lady of Mount Carmel Catholic Church in Temperance, even watching the priest take notes in their meeting.

"We wanted him to celebrate how Maison lived, not how he died," Maison's mother said. Instead, when LaCuesta gave his homily to hundreds of mourners and family members, "It was his time to tell everybody what he thought of suicide, (and) we couldn't believe what he was saying," Maison's father said.

“He was up there condemning our son, pretty much calling him a sinner. He wondered if he had repented enough to make it to heaven. He said 'suicide' upwards of six times.

“There were actually a couple of younger boys who were Maison's age who left the church sobbing,” Jeff Hullibarger said. The bereaved father at one point walked to the pulpit and whispered to the priest, "Father, please stop," but their pastor continued with statements denouncing the way their son's life ended, the couple said.

"People told me there was almost a smirk on his face," Jeff Hullibarger said. In response to a Free Press inquiry, the Archdiocese of Detroit released the following statement Thursday night:

"We share the family’s grief at such a profound loss. Our hope is always to bring comfort into situations of great pain, through funeral services centered on the love and healing power of Christ.

"Unfortunately, that did not happen in this case. We understand that an unbearable situation was made even more difficult, and we are sorry.

"After some reflection, the presider agrees that the family was not served as they should have been served. For the foreseeable future, he will not be preaching at funerals and he will have his other homilies reviewed by a priest mentor. In addition, he has agreed to pursue the assistance he needs in order to become a more effective minister in these difficult situations.

"We have been in contact with the family since learning of this situation, and we will continue to offer our support going forward."

For centuries, suicide was considered an unforgivable sin by Catholic leaders, who denied funeral masses and Catholic burials in such cases, although the church recently softened its position and now finds that suicide can be forgiven when occasioned by extreme stress, according to a 2014 article in the online Catholic Digest.

The Hullibargers said they're speaking out because they don't want their priest's behavior to hurt others.

"Really, the only way for that to happen is for this priest to be removed. We’re afraid that, like the Catholic Church does, they’ll send him off and he’ll do it to somebody else," Jeff Hullibarger said.

Not only did LaCuesta's funeral homily upset their family, including their five other children, but the priest has been unkind to others in the parish, the couple said, although they did not elaborate. At the funeral, after he'd lectured mourners about suicide, LaCuesta tried to keep Maison's parents from eulogizing their son, even though that had been agreed on well in advance, they said.

"I had words prepared, but when (the priest) was done, he was going to finish mass without giving anybody else the opportunity to say anything. He had the organist start playing and they were going to roll the casket out — some nerve.

Both parents then walked to the front of the church and spoke to mourners, thanking them "for their kind words and kind hearts," Linda Hullibarger said. Her husband said he tried to steer the service back to words they'd suggested to LaCuesta.

"I said, unlike what was said previously, we would like to celebrate the life of Maison. I told them that Maison had a great effect on many people. He was passionate and opinionated.

"And we said we had a message for everyone — to be kind to each other, to reach out to those you care about, and to be sincere in your actions and to show love unconditionally" — exactly the behavior the couple needed but didn't get from their pastor, they said. As the casket was wheeled out, the couple told the priest he was not welcome at their son's burial.

Instead, at the gravesite "we gave our own blessing of Maison, with everybody who loved him," Jeff Hullibarger said.

The Archdiocese did not make LaCuesta available for comment. On the church's website, a page devoted to "Father Don LaCuesta" says he grew up in the Philippines, attended Sacred Heart Seminary in Detroit and was ordained in 2006, then lived for a time in a Catholic order's house in Grosse Pointe before becoming a church pastor. LaCuesta's goal, the priest states online, is "to be part of the revival of Catholic culture."

Adding to the family's stress was the appearance at their son's funeral of the man who'd coached Maison when the youth was a star linebacker at Bedford High School in Temperance, Jeff Hullibarger said.

"We’ve had four boys who played for him. He’s been bullying kids for many years," Jeff Hullibarger said. His wife said she messaged through an intermediary that Wood was not welcome at the service.

"We knew Maison would not want him at his funeral. He did not treat Maison kindly. So it was our wish that he would not be there," she said.

The coach strode in anyway, prompting one of the couple's sons to demand that he leave, they said. Wood left but soon posted this on social media:

“I was just asked to leave a funeral by a family member of a deceased football player. If you need someone to blame, I’m your man, I’m your fall guy. This is how society is when things go not as planned. We blame others for our own shortcomings. This tragedy is not about me or you. It’s about looking in the mirror as a human being and being real and honest with yourself.”

After word about Wood's online sneer reached school officials, his coaching duties were terminated. The coach "is no longer affiliated in any way with the Bedford football program,” Bedford Schools Superintendent Carl Shultz said Monday on the district's website. Wood also had been teaching history in the district, and it was unclear whether he would continue.

"The district holds all of its staff to the highest standards of professionalism (but) recently received allegations that those standards may not have been met by the coach. Therefore, we are in the process of thoroughly investigating those allegations.

"The district will take appropriate, firm, corrective action if the allegations are substantiated. To protect the rights of all involved parties, I cannot offer further comment regarding ongoing personnel matters."

The Hullibargers said they appreciate the sympathy they've had from numerous people in Monroe County after losing their son, who was a freshman at the University of Toledo and studying criminal justice. They said they especially appreciated the contributions that donors made to a GoFundMe site that will defray their funeral expenses.

Without the assistance, "this would've been financially devastating for us," Jeff Hullibarger said. As of Friday morning, the site had raised $17,155 in pledges.

The couple said they've always been steadfast Catholics — Maison's middle name Donnelly was the last name of a kindly priest who married them — but they've pledged not to return to the church where their son's funeral took place.

"Absolutely not," Jeff Hullibarger exclaimed. To which Linda Hullibarger added: "No, no, no!"