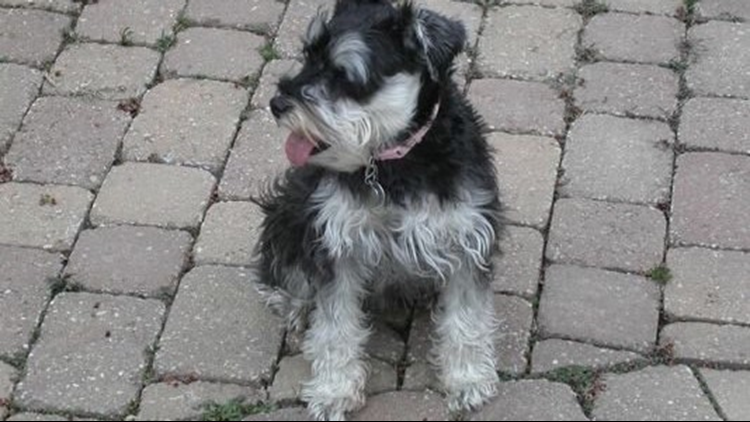 Photo by: Jenny Billingsley
Bonnie Belle, a miniature schnauzer from Berkley, Michigan was found at a rest stop in Allanreed, Texas in October of 2018. She will be reunited with her owner, Jenny Billingsley on Sunday, Nov. 11, 2018.

A missing pup from Berkley, Michigan, found 1,200 miles away in Texas will be reunited on Sunday in Oklahoma with her owner, a former Michigander now living in Tennessee.

Confusing and certainly cross-country, but we can explain.

Billingsley told the Free Press that her family hasn't seen their 9-year-old miniature schnauzer, Bonnie Belle, since she was given away to a family friend after her father, Fred Trabant, died at 75 in February 2016.

He picked Bonnie out of a bundle of puppies when they met with a Port Huron breeder years ago.

"He took such great care," Billingsley said. "He always had her groomed up there at Ashley's Grooming in Berkley on Coolidge, and he always took (her) to the vet ... North Main Animal Hospital in Royal Oak."

Just months before Billingsley's dad died, her mother took a bad fall down the basement stairs and ended up in Heartland Medical Residence Bloomfield Hills "trying to learn to walk again."

"She broke her leg and tore her colon," Billingsley said.

An only child, Billingsley said she found herself responsible for her dad's funeral arrangements, taking care of her mom and overseeing their estate.

"At the time, my husband and I, we couldn't give Bonnie the attention that she needed," she said.

So, Billingsley said she reached out to a friend her father made while working in shipping and receiving at Detroit Diesel, a woman who worked for a trucking company in White Cloud, Michigan. The woman also bred dogs.

"Actually (my dad) had gotten a prior dog from her," Billingsley said. "I reached out to her and said, 'Look, I'm in a predicament now, would you mind taking Bonnie?' and she told me, 'I would be very honored ... I would love it.' "

This dog was found at a Texas rest stop with a Berkley, Michigan tag. Amie Lewis II took to Facebook to try to find her owners on Oct. 22, 2018. (Photo: Donny Farris)

A couple months after giving Bonnie away, Billingsley said she suddenly stopped getting updates and couldn't get a hold of the woman.

"Finally ... probably around June of 2016," Billingsley said. "She told me that Bonnie had snapped at her husband — which I don't believe — and that her boss' son really liked Bonnie, so she just gave (her to) them."

Billingsley said she had told the woman multiple times prior that if at anytime she couldn't handle Bonnie, she would take her back — but she was never asked if it was OK to give Bonnie away.

"Since then, I've never heard from her," Billingsley said.

Billingsley said her husband texted her a post shared to a Berkley community Facebook page with photos of a missing dog that looked exactly like Bonnie.

A Berkley, Michigan dog was found at a Texas rest stop, Amie Lewis II took to Facebook to try to find the owners on Oct. 22, 2018. (Photo: Donny Farris)

Lewis told the Free Press that one of her attendants found her roaming around the rest area in a yellow and black "Halloween bow" decorated in skulls and beads. The attendant asked around all the trucks and cars, but nobody claimed her, Lewis said.

A dog bed, dog food and dog bowl was also found at the rest area warehouse, she added.

Spotting a Berkley, Michigan tag, Lewis took to Facebook and shared images to the "Michigan - Lost, Missing, Stolen or Found Pets" public group on Oct. 22, the post was liked and shared by Good Samaritans who blasted it around to Berkley pages — which caught the attention of Billingsley's husband.

Billingsley said Darlene Bumgardner, who works for Lewis at the rescue service has been fostering Bonnie, and they've coordinated a reunion in Oklahoma City on Sunday — a slightly shorter trip for Billingsley and her mom, rather than having to trek all the way to Texas.

“Who knows what’s transpired up until she was dumped at my place, but Jenny feels her dad is trying to get his family back together and reunite them,” Lewis said in a Facebook message. “Super sweet."

As to how Bonnie could've ended up in Texas, Billingsley said "some trucker" might have taken her.

The dog bed and collar Bonnie was found with are "the exact" ones Billingsley said she handed off to the woman who took her in.

Bonnie Belle is a miniature schnauzer from Berkley, Michigan who was found missing at an Allanreed, Texas rest stop in October of 2018. She belonged to Jenny Billingsley's father Fred, who died in 2016. Billingsely is set to reunite with Bonnie on Nov. 11, 2018 . (Photo: Jenny Billingsley)

"I'm so thankful ... if whoever it was that did this dumped her, I'm glad they dumped her at a rest area where there is a rescue organization and someone that works for them at the rest area," she said. "Amie and Darlene have been really good."

Billingsley said she's regretted the decision to give Bonnie away for the past two years.

"For me, this is like having a littler piece of my dad back," she said. "In the last two years, I have to say, I've had a few little strange instances happen that just let me know that my dad is watching over me, and I feel like he's watching over Bonnie and saying OK, we're getting Bonnie back to you," she said.