She searched 35 years for her birth father; she found him this month

Half of her family tree had been a mystery for most of her life, until she slowly began to fill it out three years ago, crafting a road map that led her to this phone call. 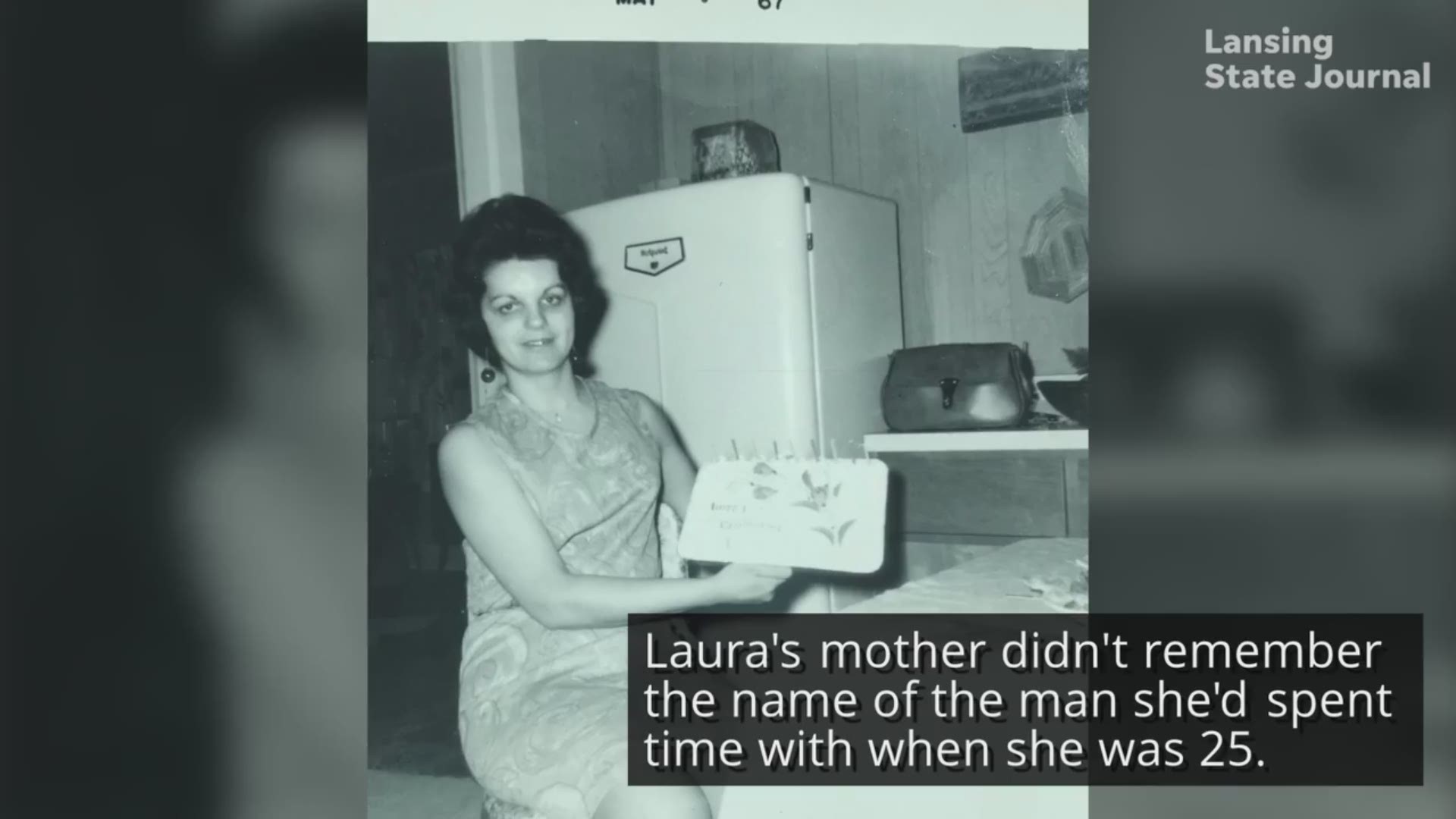 EATON RAPIDS, Mich. - Laura DeLong was sitting alone in a Chicago hotel room during a business conference earlier this month when her cell phone rang.

The voice on the other end, as the 50-year-old Eaton Rapids resident describes it, was her "missing piece."

DeLong's journey to find that voice began when she was in high school.

Half of her family tree had been a mystery for most of her life, until she slowly began to fill it out three years ago, crafting a road map that led her to this phone call.

Despite the decades and the roadblocks, the rejection and unanswered questions, the timing seemed no less than perfect.

“Laura, this is Donald LaFond,” a voice said when she answered. “I got your letter, and it sounds like you’re my daughter.”

DeLong had known Robert Getter as her father for as long as she could remember. The revelation that he wasn’t came hurtling at her one day when she was in high school.

Her mother and Getter divorced when she was 5. He remarried, briefly, and in the heat of an argument with his new wife, DeLong, then 15, learned the truth.

"Yes, he is my dad," DeLong said she told her step-mother. "I look exactly like him and he’s on my birth certificate."

“I thought she was lying,” DeLong said.

But the woman wasn't.

They didn't want their daughter to be burdened when she was a child, so both Crawford and Getter decided not to tell her.

And Getter, now 82 and retired after a 38-year career at General Motors, readily accepted her as his own child.

“It seemed like the natural thing to do," he said. "It never was her fault. She was a beautiful daughter to me."

DeLong said she and Getter have always had a close relationship. They live next door to one another. When she was a child she remembers going to get pizza with him. They’d sit in the car, turn on the radio and listen to music, the cardboard pizza box open between them while they ate.

The news that her biological father was a stranger, a bar patron Crawford knew briefly, was the beginning of a curiosity DeLong couldn't stem. His identity was a constant question mark. It popped into her head during obscure and meaningful moments over the years.

"I just wanted to know," she said. “It was just about knowing where I fit in the world."

But she was 47 before she started searching for her biological father in earnest. You have to figure this out, her doctor urged her during an appointment to diagnose what at the time was believed to be a medical issue.

“I realized, all this time I was filling out my medical documents, but I really wasn’t doing it correctly because I really didn’t know," DeLong said.

The search began with what little Crawford, now 75, could remember about the man she met at White's Lounge in 1967.

Laura DeLong with her mother Beverly Crawford. Crawford said her affair with DeLong's biological father, a customer at the bar in Holt where she was a waitress for six months, was so brief that she didn't remember his name. (Photo: Photo courtesy of Laura DeLong)

Her encounter with DeLong’s father was brief, “basically a one-night stand," Crawford said.

DeLong said her mother knew the man came to the bar a few times a week, and "sat at the same booth every time," DeLong said. "She could remember that, but just didn’t remember a name.”

DeLong joined two Facebook groups used as a networking platform for people researching their family history. She enlisted the help of people she connected with there, and Lisa Getter, her sister-in-law.

With DeLong's genetic information they used websites like Ancestry.com and 23andMe to find potential relatives. Then they reached out to them to plead DeLong's case and ask for help.

In the last three years, Lisa Getter contacted more than 20 people on behalf of DeLong. She made phone calls, sent emails and connected with strangers over social media who she believed were related to DeLong.

You could be a cousin, Lisa Getter told them. You might be her father. Are you willing to take a DNA test?

"There were some people who wanted absolutely nothing to do with it," she said. "But there were also quite a few people who were excited. They were fascinated by her story and they wanted to help us, but the people who would not help were sometimes the ones we really needed help from."

Each time a potential relative agreed to a DNA test it helped DeLong figure out how she was related to them, and moved her one step closer to finding her biological father. Each time someone refused, they had to look for a way around them — for a nephew or niece willing to take a DNA test instead.

The search was an emotional roller coaster, DeLong said, and the rejections stung. At times they made her want to stop looking for her father altogether.

Lisa Getter began to make more of the phone calls as the rejection began wearing on DeLong. And she said she never stopped encouraging her along the way.

"She was so close and we knew it," she said. "She had so much invested into it and she deserved an answer."

Then earlier this year the name Donald LaFond surfaced — and all the information DeLong's supporters were collecting pointed in his direction.

A knock on his door

LaFond will be 90 this summer and lives in Houghton Lake, but in 1967 he worked as a product engineer at General Motors.

Laura DeLong, of Eaton Rapids, with her biological father Donald LaFond, who lives in Houghton Lake. DeLong spent the last three years trying to discover who he was, finally seeking out help on a "DNA detectives" Facebook group. Father and daughter met for the first time this month. (Photo: Photo courtesy of Laura DeLong)

He lived just down the street from White's Lounge in Holt and visited it often, but he only vaguely remembers Crawford.

Lisa Getter said they knew he'd lived in Holt at the time of Crawford's affair, and it was clear that LaFond and DeLong were closely related.

So in March, Lisa Getter drove the two-and-a-half hours from her house in Olivet to LaFond's home.

"I knocked on his door and he only cracked it open three inches and said, 'I can't see you today,'" she said. "Then he shut the door."

Lisa Getter got back in her car, grabbed a sheet of paper and started to write a letter that she intended to put it in his mailbox. Before she could do that LaFond's caretaker pulled in the driveway and let her in the house.

During their brief meeting, she said the news that he could have a daughter only confused him. Before she left, LaFond asked for DeLong to send him a letter.

On March 27, DeLong sent LaFond the first of two letters, including family photos of herself and Crawford.

“I’m 50 years old and have been searching for my father since I was 16,” she wrote. “I’m a genuine, loving, kind-hearted and caring person and pray you will help me find the answers…I’m not looking for money, I just want the peace that comes from knowing who my father is and where I fit in this world.”

DeLong asked LaFond to take a DNA test, and included her phone number.

She didn’t hear from LaFond. Then one of LaFond's family members reached out to tell her he had no interest in helping her.

DeLong almost decided to give up, but a friend urged her to send one more letter.

She sent it April 9, via next day mail.

Her phone rang in her Chicago hotel room the next day.

DeLong and her husband Mike drove to meet LaFond together April 11. A DNA test confirmed he was her biological father two days later, but by then both said the father-daughter connection was obvious.

Take, for example, their similarities. LaFond once owned his own construction company. DeLong opened her own real estate business in Eaton Rapids 11 years ago. LaFond ran several marathons. DeLong has finished one, too.

"She's a lovely person," LaFond said Wednesday. "If you had to pick someone out of a group to meet, you couldn't pick a better person."

His enthusiasm for the daughter he never knew he had, made her journey worthwhile, DeLong said.

“It all worked out how it was supposed to,” she said. "When I left there that first visit I told my husband, ‘If I never see that guy again, I’m at peace with my life now because now I know why I am who I am.”

DeLong said she hasn’t met LaFond’s two sons, although she has talked to one of them. Her two fathers haven’t met each other, either. They’re both dealing with health issues, but DeLong said she’d like them to meet eventually.

“I want Donald to meet the guy that raised me,” she said.

She's taking a patient approach to whatever comes next. She's always believed things happen for a reason.

“It’s a lot to digest for people,” she said. “I’m overwhelmed and I’m sure that they are, too. My only priority was to know my father. To see how happy he was made it worth it. Now I feel like I have those answers I always needed.”