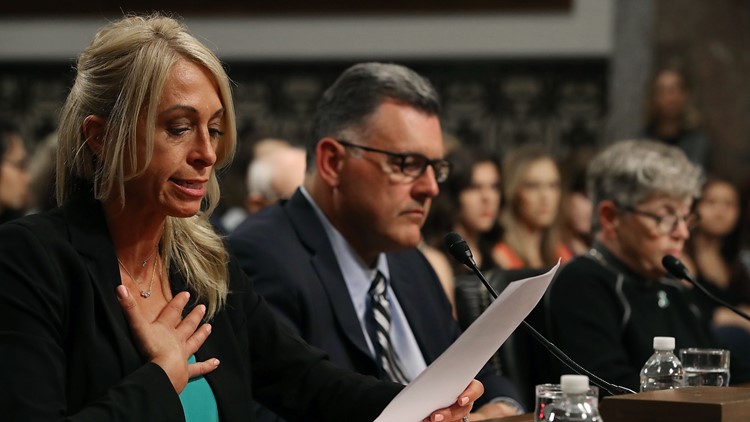 USA Gymnastics parted ways with Faehn as senior vice president in May after she was criticized by victims of Larry Nassar, the former national team doctor serving decades in prison for abusing athletes.

Faehn was with the Wolverines for a meet at Alabama on Friday, a day after she agreed to work for the school through this season.

"I am heartened at the outpouring of support that I received this weekend," Faehn said. "I am thrilled to join the University of Michigan and am appreciative of the careful consideration demonstrated by the administration. I am excited to work with these young women and am thankful for their enthusiastic support."

Michigan athletic director Warde Manuel said he supported the hiring recommendation made by gymnastics coach Bev Plocki after reviewing her role with USA Gymnastics and her coaching career.

"The well-being and safety of our student-athletes is always our highest priority," Manuel said. "Our current student-athletes had a prominent voice throughout this search process to provide their perspective. This included a meeting between me and the captains before a final decision was made.

"After our exhaustive due diligence, we felt comfortable that Coach Faehn reported all information available to her regarding Larry Nassar and that she cooperated fully, including voluntarily participating in all investigations and offering testimony before Congress. Neither an internal investigation by USA Gymnastics or a criminal investigation by the FBI have assigned culpability or resulted in any charges against her."

USA Gymnastics hired Faehn in 2015 and she oversaw the women's elite program, drawing on her experience as a U.S. national team member in the 1980s and a three-time national championship coach at Florida.

Faehn was alerted to potential abuse concerns about Nassar. She passed along the concerns to then-USA Gymnastics president Steve Penny, who was later arrested on charges he ordered files pertaining to Nassar removed from the team's training center at the Karolyi Ranch in Texas.

Aly Raisman, a six-time Olympic medalist, raised concerns recently about Faehn's role in the matter. Raisman said she wasn't sure why Faehn did not go to authorities herself.

The organization conducted an internal investigation before removing Nassar and going to federal authorities. USA Gymnastics did not alert Michigan State, where Nassar was a faculty member, or a club in Michigan affiliated with Nassar. He pleaded guilty to molesting women and girls under the guise of treatment and was caught with child pornography. He is serving three prison sentences and will likely be locked up for life.

Michigan State reached a $500 million settlement with hundreds of Nassar's victims. While USA Gymnastics has been hit with multiple lawsuits from victims, Faehn has not been personally named in any of them unlike Penny and longtime national team coordinator Martha Karolyi.

"Following a comprehensive search process working closely with our administration, I am pleased to add Rhonda Faehn to our staff," Plocki said. "I have known and respected Rhonda Faehn for over two decades. Her accomplishments in our sport speak for themselves. Her technical knowledge and experience will greatly benefit our student-athletes."