GRANDVILLE, Mich. — The best pep rally in West Michigan is back for a third week and we're spending the morning with Bulldogs at Grandville High School.

13 ON YOUR SIDE's James Starks was going to take on the Bulldogs solo this week -- but instead, we enlisted the help of three student co-hosts: Paige Corfixsen, Ayden Rycenga and Ian Doyle. The four of them kept the students pumped all morning long!

James and his co-host Ayden caught up with the robotics team. The team has been with the school for about 25 years -- they build multiple robots and compete across the region.

James, Paige and Ian took a look into the spirit store at Grandville High School. It's a completely student-ran program that is in conjunction with the school's DECA program. The students get the merchandise, balance the books and many other aspects of running a full-functioning business.

James and Ayden gave us a look at the Engine Tech class at Grandville. It's an very interesting class, students that may have never opened the hood of a vehicle and some students have been working on vehicles and machinery for years.

Grandville has a super special mascot, his name is Bubba the Bulldog and he's the cutest!

James and Ian swung by the band section and got a look into the band's day-to-day schedule. They're a high energy band and bring some serious heat!

In true Sunrise Sidelines fashion, James took a little lunch break and "crashed the cafeteria." It's the perfect time to hang out with the students and maybe grab a slice of pizza or two.

GET YOUR HEAD IN THE GAME

Each week of Sunrise Sidelines, we always bring some friendly competition to the show. This week, we had students rippin' tissues to see who'd come out on top!

James and Ayden also caught up with Grandville's Dawg boys, a pumped of team of male cheerleaders that go crazy during games. They also grabbed two students to whip their arms for the unraveling ribbon game Friday morning.

But the game that takes the cake... well, the cheese balls is the game we look forward to the most. We sit down three teachers/staff members, cover their heads in shaving foam and have students toss cheese puffs onto the heads. It's messy, it's crazy and it's always a fun time!

Things where a bit of a struggle for the Bulldogs last season. Grandville finished 4-5 last year and missed the playoffs for the first time in 4 years. Players and coaches focused on the details during pre-season camps, which has now put them 5-0 overall for the 2019 season. Grandville was recently ranked #7 in the state under Coach Eric Stiegel.

"I think the big thing for us -- is realizing that every play can make a difference," Stiegel said during our Two-A-Days preview earlier this year.

See the team in action Friday, Oct. 1 when the Bulldogs face the Hudsonville Eagles at Grandville High School at 4:30 p.m. 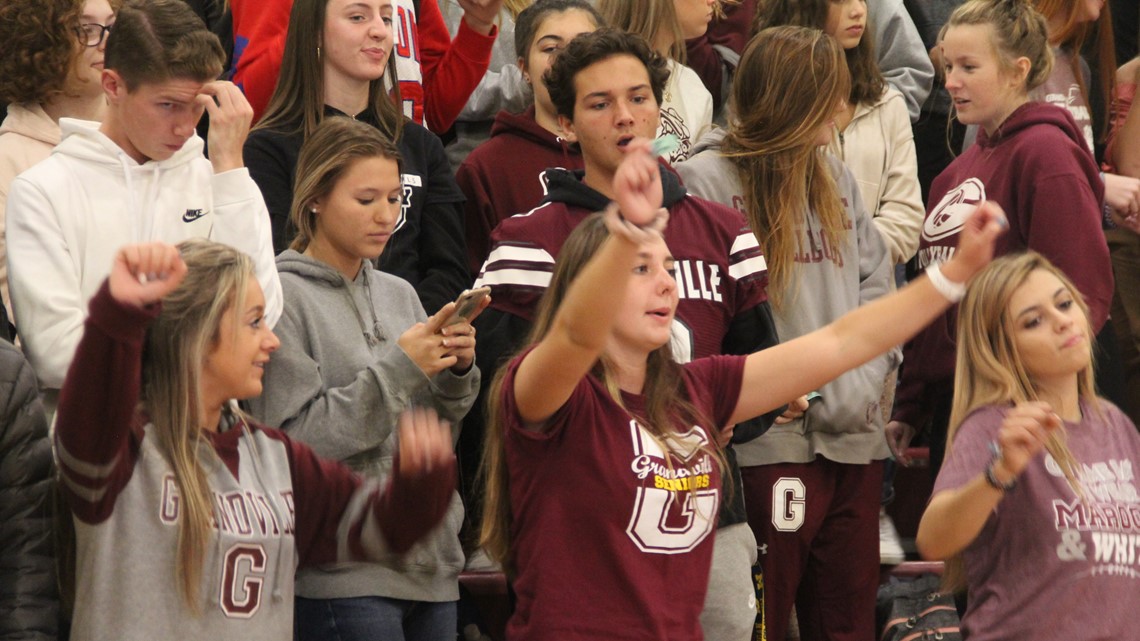