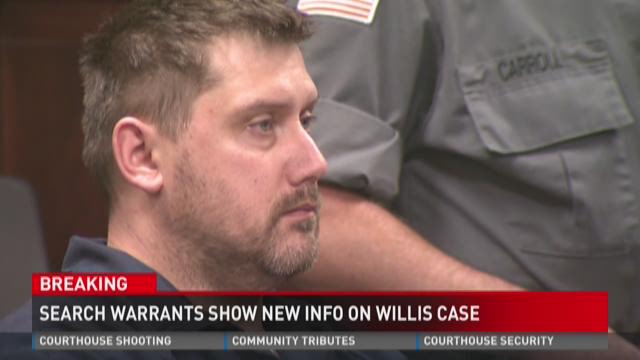 Those warrants were unsealed Tuesday, July 12, following a months-long investigation. Among the new information, detectives asked for permission to search Willis' home and van and were looking for items that could have been used in "abductions, homicides, and unsolved cases."

Days before his arrest, police secretly began following Willis' van and watching his every move.

Willis is charged with killing Rebekah Bletsch in 2014, the failed kidnapping of a 16-year-old girl in April and is a person of interest in the Jessica Heeringa disappearance.

On May 11, Willis was seen at the Meijer on Harvey Street. He sat in the parking lot for 15 minutes but never entered the store. He did, however, "very slowly" drive "up and down" several parking lot aisles, the documents say.

In 2007, a woman reported Willis was videotaping her at a Sam's Club parking lot. The woman told police Willis also followed her as she drove from the parking lot, but he stopped after she made a sharp stop.

The woman reported what happened to police. Willis was not ticketed nor arrested.

At Willis' home, police seized computers and hard drives and found printed pages inside a canvas bag in the attic of a shed listing "serial killers of the U.S." Also found were printed pages of personal ads with hand written "women's names" and phone numbers.

The papers show Willis "pulled a gun" on the teen girl he's accused of kidnapping. Then after she got away he "started to chase" the girl and told her it was a "fake gun" and he was "only joking."

All the felony charges against Willis are heading to trial. A court hearing Friday, July 15, is the first step in scheduling what's expected to be a lengthy trial.